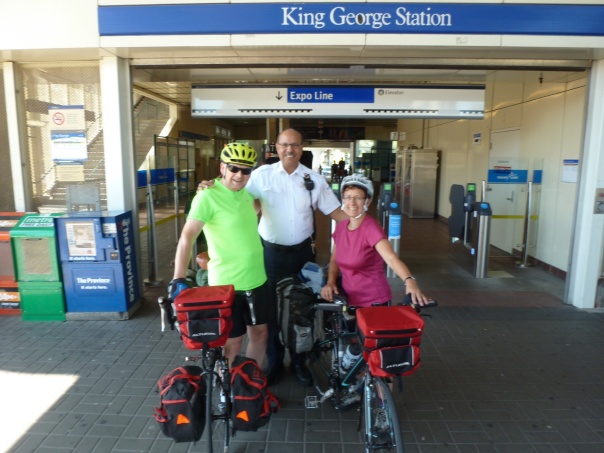 We arrived at Surey King George and this is just before we left to start the trip.

I confess to being quite nervous about this whole trip.  I am just reading Mark Beaumont’s book “The Man who cycled the world”, which is about his attempt to beat the Guiness Book of Records record for cycling around the world.  Apparantly they make up “rules” for this, one of which is that you have to cycle at least 18,000 kilometres going East all the time.  He did it in 195 days, but that was when he was 24.  I am over double his age, and we are just planning 2500 miles, which I suppose is about 4000k.  The book is fine but he is perhaps a more accomplished cyclist than a writer.  Also the pressures of trying to break the record meant that he was cycling an average of 100 miles a day.  That meant he cycled through some great countries but saw very little of them because he needed to focus on the mileage.  I wonder if there is a Guiness Book of Records record for either the slowest cycle around the world, possibly connected to the cycle trip with the most amusing anecdotes, or even the most decrepit former lawyer who attempted to cycle around the world! That would appeal to me more, apart from the “former bit” of course.
But back to our trip which feels like putting a toe back in the water of long distance cycling.  The questions that whizz around in my brain are “Will I still enjoy it?”, “Is it too much for us now that we are in our 50s?” and “how far can I realy get each day without decent coffee?”.  The last one is, of course, the mission critical issue but there is often good coffee in the most unlikely of places in the US and so that may be a nut we can crack.
We arrived in Vancouver and the bikes were there!  So we did pedals and pumped up tyre, and put on paniers, much to the amusement of better dressed travellers.  Then we took the city transit system to the outskirts of Vancouver and got off at the end of the line.  We chatted to the station guard who could not quite believe that we were cycling all the way to Abbottsford (44 km) and tried to get a bus for us.  But we cycled off and to our astonishment it all worked and we went along at a reasonable pace, although we were both quite tired as it seemed like evening to us.
The cycling was pretty mundane  wide roads, lots of traffic and a bike path at th eside but it was a good way to warm up.  We covered the 44km in about 3 hours and are now in the Best Western.  Some things are the same the world over!  Dinner was typical North American food (burger for me, salad for Bernie and both shared).  Now read for bed as it is 3am according to our body clocks.  We start for real in the morning.

1 thought on “The start at Surrey King George Station”