The stats for day 3 were 58 miles/2650 ft climbed/2850 calories
David woke early and had a splendid hour reading whilst the day emerged. The dawn chorus of birds was impressive and the forest was lovely. Last night we went for a walk down by the river Skagit, which at this point is a wide flowing river. There are salmon in the river, deer in the woods and the rainforest was covered in moss. It was atmospheric and reminded me of the rain forest near Cradle Mountain in Tasmania.
Anyway back to today. We got on the road about 8 after a bit more faffing. One of the features of cycle touring is that each day it gets easier to get up and get going. There is a rhythm to the things that need to be done each morning. We are not quite in ther groove yet and so it takes longer, but it is coming back. Started along back roads towards the wonerfully named “Concrete”. I kid you not – look it up on the map – there is really a town called Concrete. AS we came into town there was a large concrete building with a big sign on it which said “Welcome to Concrete”. And a charming but regrettably deserted place it proved to be. Concrete is not open at 8.30am and so we pressed on.
The road took us alongside the river Skagit, meandering around the river at first and then solidly climbing as the river displayed more white water. After 18miles or so along the main SR 20 (which I think stands for State Road 20) we reached Rockport. Less of a place than Concrete – but it had a general shop that was open and so we stocked up on provisions. The locals were friendly, but then we were spending money on slightly too expensive food. But there is not great choice in the mountains and I don’t suppose customers are exactly flooding in.
We asked for fruit or vegetables and were told “Sorry but no vegetables until Thursday”, and it seemed from the way it was said that everyone knew this – or at least everyone who mattered!
Having filled a small rucksack with 2 days food we left the main road and ambled along the Rockport Cascade Road, which took us from Rockport to the river Cascade. This was a fairly major river which joined the Skagit near the next town, called Marblemount. A lovely ride through felled forests, although by this time the sun was warming up. There were a few small but steep climbs just to remind us that we were in the mountains but it was mostly flat. After another 10 miles we reached Marblemount which was on the main road and had 3 restaurants. Not a cafe for miles and then, like London buses, they all come together. We picked one at random (no wifi and hence yesterday’s blog will be posted late) and had a mixture of breakfast (second) and lunch.
Refreshed we struck off up the road towards Newhalem. The wide river Skagit had become an alpine river, tumbling down across rocks in a beautiful narrow mountain valley. The road took us into the North Cascades National Park – and teh stunning scenery fully justified the description of being a National Park. However the Guidebook suggests that this part of park only gets 2500 visitors a year, which seems hard to believe. We gradually (and then not so gradually) climbed towards the next town. This was Newhalem at a height of about 550ft, but we diverted to the Visitors Centre which was decidedly friendly but not a great deal of use. The general leaflet referred to a special leaflet for cyclists, so we asked for it. Blank faces from the helpful receptionists in Ranger uniform. Then one looked at her own material and admitted that yes, there was a leaflet. After searching the files they came up with a single sheet that was a combination of the statement of the obvious (please wear a helmet) and guiance about what we ought to have brought but either had or had left at home. Not the most useful leaflet – which perhaps explains why we were given the last one they had and there was no general desire to print any more! 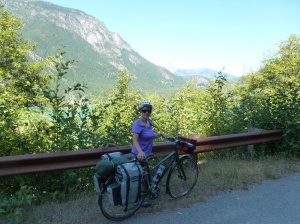 After Newhalem leaving about 2pm) the climbing really began. We climbed from 550 to 1200 ft in about 4 miles, and all in the heat of the day with full panniers and having already cycled 40 miles. I am sure that there are those who are scoffing at this and thinking that it was not a great deal to write home about (and I would point out that I am writing a blog and not writing home) and others who read this and it just confirms our madness. I am with the latter group at the moment, but then again I am typing this on a wonderful, remote lakeside campsite and feel I got here undfer my own steam (with a little help from a jet engine to Vancouver of course but after that it was all shanks pony). The road took us by the George Lake which was created by erecting the George Dam. George who we wondered but not enough to stop to find out. The resevoir was fairly empty at this time of the year and so there was a bizzare sight of tree stumps in the dry part of the lake, which will no doubt fill up in the spring.

Then another 500 foot climb (this was the theme of the day) along the side of Lake Diablo (named after the town Diablo which we bypassed) and finally down to the campsite. 58 miles done and we haev survived day 3. Stunning mountain scenery, fantastic rivers and snow on the top of the mountains. About to cook supper now but we need to get an early start tomorrow as we have the first serious passes to conquer. !!!

1 thought on “Day 3: No vegetables until Thursday”