A 5.30 alarm woke us from our best sleep yet – probably because it was cooler and the first night I actually cuddled into the sleeping bag. We were packed up and off by 6.30 and straight into uphill.  Even at that time there was a fair amount of traffic on the main road but after 6  miles we were able to turn off onto the old Blewett Pass road.

This was an idyllic road with no traffic at all.  The road surface was beginning to erode and in as few years rock falls will probably close it all together but for now it wound up through pine trees, the view opening up as we went.

The valley was uninhabited but it was not always like this because this was the site of a goldrush in the 1860s. Up to 400 people (mostly men I assume) panned the fast running river for gold and the lucky few sold their gold in Seattle and made fortunes. It was all worked out by 1910 and the town they built in the valley, Blewett, fell derelict. It is only marked now as the name of the pass but this area has a fascinating history.

The sun was out and blue skies still but the early morning cool to reach the top of the pass at 4100ft.

A more cautious downhill the other side to avoid the pot holes then back joining the trafiic on the dreaded I97 – streams of RVs going past having packed up for the weekend. A few  miles on – all downhill now – and we stopped at Mountain Springs restaurant for our first full American breakfast  of pancakles, eggs, bacon, maple syrup etc.  We felt we deserved it!  Further on down and the 97 split off with the main road heading off to Seattle and suddenly the volume of raffic decreased. We were into another 1000ft climb but managed to plod up in the middle chain ring.

We must be gettting fitter! Views over agricultrual land and a wind farm at the top – and just the crest of a snow capped peak to be seen in the far distance, which must be Mount Rainier, the highest peak in Washington State.

Then our best downhill yet – 15  miles down into Ellesburg with a strong following wind and a good road surface.  Felt as if we were flying.  Through the dreary suburbs of any town we turned into the ‘historic centre’ of Ellesburg to the sound of Jazz music “Jazz in the Valley”. It was the final day of a 3 day Jazz festival. Sitting in the shade we decided we would stay. The next bit of road through the Yakima canyon sounded decidedly hot and best done in the morning so we settled on a shorter 45  mile day and found ourselves a comfortable motel.  This is a holiday after all! We called David’s Mum to wish her happy birthday – Happy birthday Mum if you are reading this. 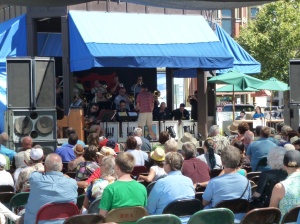 Showered and cooled we pedalled back into town – this time feeling bizarre without any panniers and in flip flops and got back to the centre just in time for the afternoon final Jazz session. Sitting on a Sunday  afternoon with a cold beer listening to a big band playing was great and we struck up conversation with a young couple next to us – Katie and Josh.

Both had studied at the university (most of the population of the town are students) and were now working for the university in HR. They were delightful and thoughtful as we discussed our 2 cultures.  Not the American stereotype at all – but then no one we have met has been so.  After a rest back at the motel we went out to eat at a nice Italian restaurant to pack in the carbs for the following day!