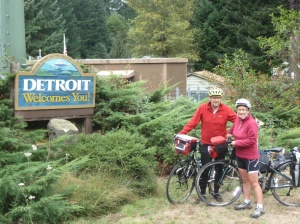 36 hours and 4 planes (Philadelphia, LA, Portland, Redmond) got us from home back to Bend, Oregon, the hospitality of Wayne and Doris and reunion with our Bikes. A great recovery day, shopping for essentials and a lovely meal in a Peruvian restaurant. Outside Bend there is a “butte” – a mountain that springs up from the plain. Pilot Butte had a road to the top (maybe 750 ft high) and was used for cyclists, runners and dog walkers. We were driven up after supper, and saw the 360 degree views of Bend and surrounding mountains, by chance at sunset. Daytime temperatures had been up to 90 and the skies were still clear apart from a few fluffy clouds that were brilliantly illuminated underneath as the orange sun sank behind the mountains. It was like a scene from a Turner painting. Sorry but not photos as we forgot the camera.
Next morning the dregs of jet lag ensured we were up bright and early and Wayne and Doris drove us up to Government Camp – our final cycling resting place before having to bail out due to injury. There we up with Tom and Carolyn – the friends we met in Winthrop and who had introduce us to Wayne o Doris. They planned to join us riding as a ‘surprise’. It was good to see them again – and Lisa, the receptionist at the hotel who had been so helpful. Lisa was quite emotional to see us which was lovely – she said she did not expcet to see us again this year. She is a keen canoeist and so the pull of the remote is very familiar to her. 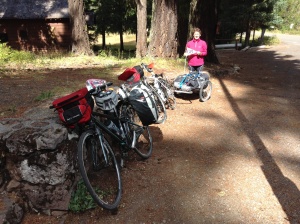 Although it ad been 90 and sunny in Bend (we can see why Wayne and Doris had chosen to live there in part for the climate), it was cloudy in the mountains and at that moment it started to drizzle. Come on – this was too like England! We didn’t hang around too long before setting up. We have a different set up this time – David has a luggage trailer rather than panniers. This has the advantage of being more stable and better able to divide out the load. So David takes a bit more and iI take a bit less to even out our speeds a bit better. We had trialled it in England and it had worked well. So off we set, complete with trailer flag with a GB sticker on and at that point the drizzle stopped. We were off! It felt good – in fact it felt better than good.
The first 10 miles were on the main road and we had one hill to get over. Legs were taking time to warm up after too much time on a plane. However we then turned off onto one of the best roads we have been on since we started in Canada. The whole of the rest of the day we only saw about 10 cars but the road surface was really good. Weaving along between mostly pine trees but also some other trees and shrubs the colours were already turning – autumn comes early up in the mouintains. This part of the trip is going to feel very different as we hopefully chase the autumn colours as we go south. We stopped for lunch at Clackermas meadow and had a bit of a hiccup. I should explain that Tom and Carolyn were in a small camper van (not an enormous RV) so the plan was that Carolyn would drive ahead, park and then cycle back and join us. We reached the designated stop but there was no Carolyn. Eventually it transpired that there was a slight but significant misunderstanding between us. After a while of non-appearance of Carolyn we decided Tom would wait and we would carry on to Breitenbush – because of the late start it was already mid afternoon. 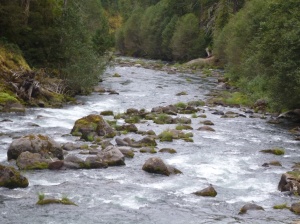 The afternoon road was even better. In parts the road was a single lane track but paved; almost unheard of in the US. We then had a most fantastic downhill (one of the best of the trip) – losing the height David had so painfully gained on the last day up to Bennett pass. At the bottom we crossed a small wooden bridge with a bit of a bump at the end – and an ominous metal rattle started. My rack had snapped! Another Heath Robinson repair with a bungy cord and we weren’t delayed but will have to sort it at the next big town. After a couple of hours we were increasingly perplexed about the seldom seen Sullivans! We stopped to rest by a river. Slightly concerned that still no Tom and Carolyn but just as we were setting off again the white camper van appeared in the distance and we were reunited! Tom joined us again on the road with clearer intructions this time to Carolyn on our destination! We had quite a stiff climb, legs definitely getting tired, but were rewarded again with a fabulous down hill – hitting my fastest speed ever (38.8 mph) before breaking round a hairpin bend.

At Breitnebush campground Carolyn had found a lovely site by the river and had a campfire going. Back into the routine of pitching the tent. It hardly felt as if we had left off and had had a great day’s ride. The other big difference this time though will be the shorter days and it was pitch dark by 8. We had the luxury though of sitting in the camper van and duly retained the honour of the UK by beating the USA at scrabble (only thanks to “Jets” on the triple word which seemed appropriate given our 4 flight in recent days)!