David:  Well this adventure is drawing to a close, and the latest day’s cycling really brought that home to me.  We woke in a Best Western in Tehachapi and I am typing this in a Best Western in Palmdale, there being a distinct absence of camping sites in either location.
After perhaps the worst breakfast since we got to the US (the land of wonderful breakfasts as well as so much else that is both good and not so good) we pedalled off to rejoin the route.  This is a dry, dusty environment with dry and dusty roads.  We ambled around the town centre (assuming there is a town centre but knowing that this is not the case for many US towns) and towards a hill that was full to bursting point with wind turbines.

Several things about this wind farm are worth noting.  First, I have never seen so many in one place.  CalWind must have had 300 tubines on the ridge.  Second, I suspect that in this location the objection to wind turbines elsewhere in the world (what happens when the wind does not blow) is rarely if ever a problem.  The wind seems perpetually to be blowing in one direction or another and often in several directions at the same time.  Third, the sheer size of the turbines was amazing.  This was brought home by seeing some new blades arriving on a truck, and seeing that they were about 60 feet long.  Finally, these were quiet.  The complaints about annoying humming do not apply to these ones – they silently convert wind into energy.  I have no idea if they are subsidised (like so many places in the world to the aggravation of my brother who is an economist) but maybe the answer is that they are allowed to build so many of these silent and graceful structures that they may not need so much subsidy. 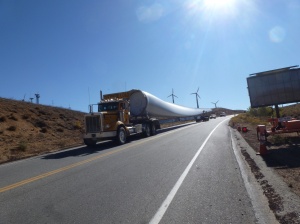 Going down from the windfarm was a delight because the wind was more with us than against us.  We zoomed and, on the way down, saw our first cactus.  This road was straight on the map and there was a reason.  There was nothing to require any bends.  As the road flattened out we knew we were in the desert proper.  The road was straight for many miles, with a criss cross of roads names 90th Street West and “A Avenue West”.  We soon worked out that  B avenue was exactly 1 mile from A avenue, and so on, with 80th Street 1 mile away in another direction.

In some places there was farmed land where irrigation was working but many places were just scrub desert.  At one point we crosed into Los Angeles County, but there was no massive sign to welcome us!
We met one chap on a bike when we stopped to relieve the constant pressure on our posteriors.  He was massively overweight and probably in his late 30s, but was cycling in the desert to get fit.  He told us that he worked in Palmdale and was building up to being able to ride to work.  He told us his goal was to be able to ride up to Tehachapi, and made it sound as if this was still some way off.  He was, at this stage, a somewhat unlikley shape for a cyclist.  But then he said “It helps get this off (pointing too a very substantial stomach).  I have lost 100 pounds already”.  This was jaw droppingly impressive.  100 pounds is about 45 kilos.  Hats off to him – and he got on his bike and cycled off faster than we were able to do.

After 19 miles of straight road we turned into the strong wind to go from 90th street to 50th street (4 miles for those paying attention). Tough work in the heat which was about 85 degrees. But we did it and then, after stopping for a coffee and shared burger, climbed the hill to Palmdale.

Palmdale is an LA suburb and we felt that we were being sucked back into urban living. This was a million miles away from the hunters who assembled at the cafe on a Sunday morning in Butte Falls (see earlier section for details) but all part of the USA. The cars drove faster, they paid less attention to cyclists and the roads were wider. We found our way to the hotel and settled in. ( Bernie: Warm enough here to have an outside pool and jacuzzi functioning in October, we soaked in the bubbly jacuzzi – letting the bubbles massage our muscles – bliss)

4 thoughts on “Tehachapi to Palmdale : 54 miles and not much climbing”