Today was all about one decision we took at 3.15 pm, namely whether to begin a 1000m climb up a mountain called Kandal. We decided to do the climb even though we had covered 90km by then and could have avoided it by cycling around the mountain. Was it a good decision? There are some reading this who will shout “No” you blithering idiots of course it was not a good decision. And you are probably right, and half way up we would have agreed 100% with you, but by then the die was cast. 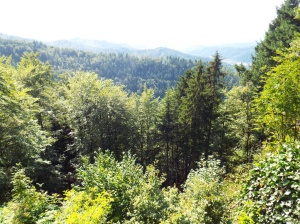 But back to the beginning. We said our goodbyes to the endless wonderful hospitality we had received from Chantal and Phillippe. We enjoyed their company, fed off their knowledge of Strasbourg and they led us to see so much of a fantastic city. Feeling full of bread, jam and coffee we strode forward (or cycled southwards) out of Strasbourg. 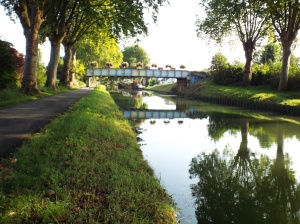 Our route took us along the Canal du Rhone au Rhin (which I assume does what it says). It was flat, straight and was a delightful way to leave the city. The air was cool and we made great progress. The canal is wide enough for large barges but is not on the same scale as the main river. 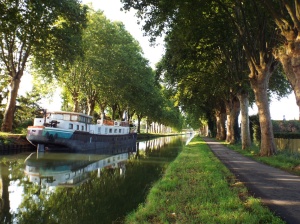 After about 30km of dead straight riding we got to Boofzheim where we bade the canal goodbye and headed for Rhinau, which had a ferry that crossed the river. There was a long queue of cars waiting for the ferry but being cyclists we slipped into the front of the queue without any complaints. After all we were not taking a car slot, but even then did feel a bit guilty. The ferry may be the last we see of the river that we have followed since Hook van Holland, so we said our goodbyes and thank you to the river for having put up with us for the last 10 days and strode inland.

First stop was Ettenheim, which has a really good bakery and pastry shop that also sells cake and coffee to make cyclists get up hills. I had a chocolate muffin with added zip for the legs and Bernie had a lovely German version of a Danish pastry (also with added zip to the legs). One thing was not clear to us, namely how “fit for climbing” we really were. Were we Mark Cavendish (fast but not the best climber) or had we become all rounders like Froome and Wiggins (in each case of course at about a quarter of the speed (but then they are not hauling a trailer with camping gear. The Tour de France would, of course, look very different if they all had to camp and haul their own gear to do so. However I suspect they would still be 3 times faster than us. That brings us to one of life’s mysteries (as well as the meaning of life) namely how do professional cyclists have the will power to cycle through France without coffee stops. Perhaps the peleton pulls into a town and, when no one is looking, they all park their bikes, have a quick coffee and muffin, and then get going again with the understanding that no one will take advantage of such a necessity. 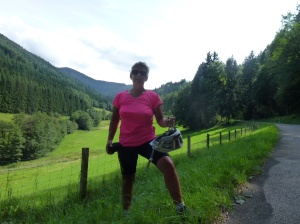 Back to today, where we had to climb our first hill after coffee. We probably felt more Cav than Froome as we slogged up to 500m, but then had some great views and a superb descent. The Black Forest is, of course, green rather then black. The black is referable to the skies and the gateaux (yet to be sampled but we will not leave the forest without partaking of course). It is an are of hilly forests, with the occasional farm. Climbs tend to be in the trees which makes them shady but unlike some of the climbs we did in Washington state (sorry Tom and Carolyn) the views come out to play at the top. 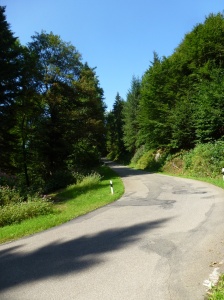 We lunched in an apple orchard watching young mums collect their toddlers from play school, all of whom appeared to have developed advanced distraction techniques to avoid getting into a car seat. They must teach this at kindergarden in order to build loyalty and prevent parents being able to take the children away. However the lengths that German 3 year olds can go to avoid being strapped into a car seat was truly impressive.

The sign for the next part of the route warned that the road had a 9% gradient. It lied. When we got to the steep bit the sign chuckled at us – fools it said – it is actually 18% and it was. This would have reminded Chantal and Phillippe of the worst excesses of Sustra devising cycle routes in the UK. It is fair to say that, after a lifetime of living with bike routes in France and Germany, C & P were not great fans of Sustrans. Doing bike routes on the cheap and without any consideration for the poor b*******ds who have to use them may be a fair reflection of their views. Having cycled in France and Germany I can see their point, but equally before Sustrans there was nothing (apart from the good old CTC). 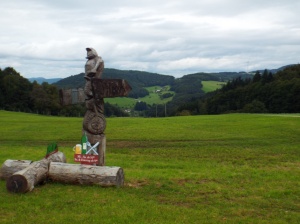 We reached the town of Waldkirch and had done 90km. I managed to find a bike shop that sold me a decent pump (one of the few things lost en route due to a misunderstanding between us). We asked about the climb to Kandal and the man he did lie. “No it is not steep” he said “at least apart from 500m for the Black Forest”. We should have ignored everything except the end of that sentence. It was 1000m climb across 12km, so an average of 8% but felt much steeper in the first half.

We slowly made our way up, with stunning views emerging through the trees as we climbed. I will not deny that we were pretty knackered and doubted our decision making as well as our sanity on several occasions. But we got to the top in 2 and a half hours. The views were superb in the late afternoon sun. Just thought how much that would count for on a fat burning exercise bike routine (except for the Mars bars consumed half way up of course). Absurdly pleased with ourselves that we made it and we did have climbing legs after all after weeks on the flat. The alps hold no fear now (a statement I may well live to regret). The feeling of being on the edge of our physical endurance rewarded by superb scenery and swooping downhills a reminder of our US trip and why climbing mountains is not as mad as it may seem. 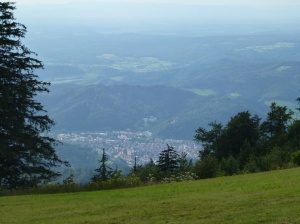 Downhill as OK but a bit too steep to be relaxed. Tingly fingers due to over breaking. Then we were 2km from Sankt Peter and, devastating, it was another 2km uphill! By then our legs just did not “do” uphill. But we got there, found a lovely campsite and had a meal of salty bacon and rice to replace lost salts and a beer to replace lost fluids! 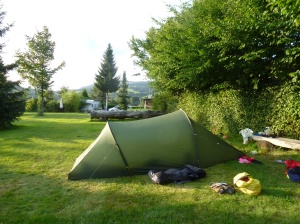 Interesting we met a young couple from Manchester who had bought a fixed caravan here, and said that with cheap flights from Manchester it made the perfect holiday location with their 2 year old (and proudly almost aged 3). It made sense to us, but I wonder if he will start to learn how to avoid being strapped into a car seat.