Today is Sunday and a day of rest for us after a week on the road. After our early starts we had a lovely lazy lie-in in our comfortable apartment. 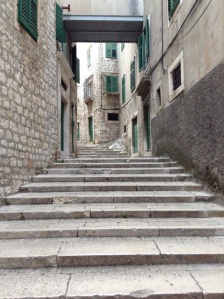 We had been given the use of washing machine and dryer and took the opportunity to wash everything properly so not only rested but the luxury of really clean clothes! Finally we stirred ourselves for the 10 minute stroll down to the seafront, passing the Split Rugby Club on the way. Right on the front is the amazing Diocletian Palace – a living roman ruin. An area about 200m x 200m it is not a palace as such but a walled area full of roman ruins amongst narrow streets of houses and cafes with the occasional sphynx plundered from the egyptians. It was of course heaving with tourists and had that feeling we all have of knowing we were tourists too adding to the crowd but feeling different from everyone else! At the centre was the cathedral but it was closed to tourists for a series of Sunday masses. There was another bell tower to climb and this time I decided to be brave, feeling confident that it would not be full of open stairways this time. How wrong I was but this time I was half way up and there was no turning back so clinging to the metal rail I climbed up trying not to look up or down! Surprisingly I made it out again alive, like everyone else and the views from the top were great. Definitely better seeing it in real life. 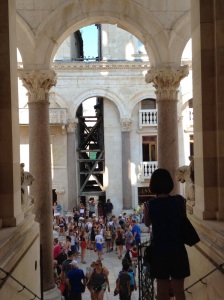 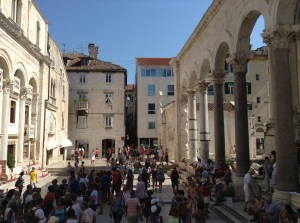 We strolled around the rest of the area but wasn’t a lingering environment with the crowds and the heat. As we were leaving we came across the synagogue I had read about. It looked closed but a passing guide told us to ring the door bell and we would be let in. A jewish man in his 60s let us in and showed us round the small peaceful synagogue which we had to ourselves. A sudden oasis after the clamour outside. It is the 3rd oldest synagogue in Europe that is still in use. 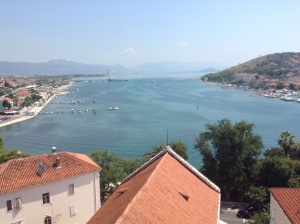 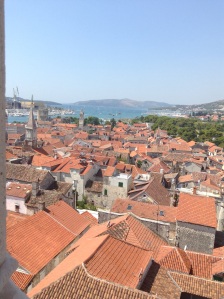 There is only a jewish community of 100 since WW2 (although it was only 300 before). He explained that 95% of the country are Roman Catholic Croats so the rest of the minorities are pretty much left alone, presumably posing no threat to the vast majority. The average age in the community was 65 so who knows how long it will last – but the first wedding in the synagogue since WW2 was held in 2012 so perhaps a new generation will come along.

Back at the apartment we packed ourselves up then headed down to the ferry port to get tickets for the 2.30 ferry to Hvar Island. We had half an hour before boarding and stood in the shade eating ice creams watching to the total chaos of cars being loaded, unloaded, trying to do U turns and all of humanity passing by.

On the ferry we met another touring cyclist. A chap in his late 20s who was Russian but had lived in LA since he was 10. We had a good chat and compared our cycling routes. We drew into the port of Stari Grad and joined the scramble to disembark then had a lovely 10km ride in the late afternoon sun over to the completely gorgeous town of Jelsa and camped in a lovely camp ground on the edge of the town right by the sea under shady pine trees. The campsite was crowded but simple and pleasant. Kids were having fantastic fun on a big bouncy castle type contraption in the sea while we swam in a sea of perfect temperature. We chatted to both our Italian camping neighbours (Marco ran a bike shop at Lake Maggiore) and Croatian camping neighbours who told us all croatians were lazy and probably viewed us as lunatics for cycling – so no change there then! 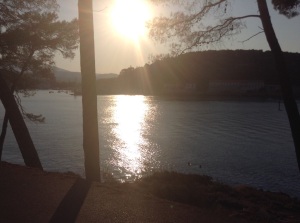 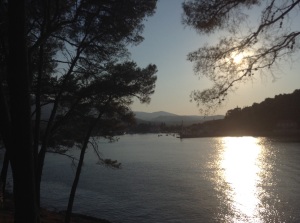 Now we are sitting in a bar overlooking the bay, sipping beer (there’s a theme here), as the last rays of the sun dipped behind the green hills, bats flitting past and the town in front lighting up, glinting in the waters. 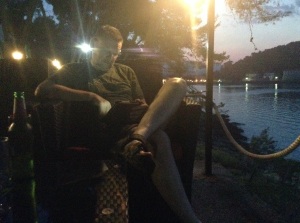 It could not be a more perfect setting. A great day and after a good rest day looking forward to tomorrow.