We allowed ourselves a modicum of a lie in today – 6am and off by 7. We climbed away from the bay, past the blackened trees that had reached the very edge of the village, but soon turned along the coast along a small road to the next village – flat and good for getting the legs going again overlooking the calm sea.

The village one of so many vying got ‘prettiest place in Croatia’ then the inevitable turn up the hill. Our legs still strong in spite of the climbing the previous day we reached the centre ridge of the peninsular. At the top David had a problem with his gear shifter that had become loose. He carefully dismantled it all and got it back together working again while I did helpful things like hold out my hand to take tiny bits of metal. We were soon on our way again cycling through vineyards in the early sun. At the neck of the peninsular the little town of Ston was an important salt producing settlement and was heavily fortified with amazing stone walls and towers climbing up the steep hill.

Back on the mainland and we were back on the D8 once more. Much to my excitement we overtook 2 touring cyclists from Germany – very rare for me to be cycling faster than anyone let alone 30 years younger) but they looked as if they had even more kit than us! The road took us up and down, up and down round more little coves. 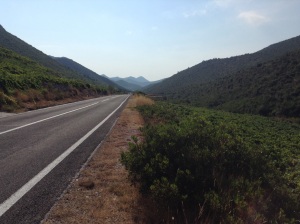 As we got nearer top Dubrovnik it got busier and it seemed hotter. 6km from Dubrovnik and we overtook another German cyclist who looked more hot and bothered than us. Perhaps we are getting fitter and more acclimatised. As we crossed a large bridge, we followed signs to Dubrovnik centre – but as so often happens when we think we are there ‘there is always one more hill’ and we slogged up and up and round the city before at last descending to the old town. 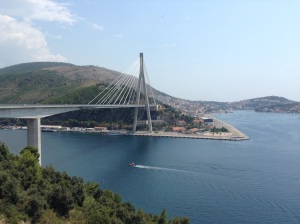 David had managed to book a studio apartment right in the centre of the old city. Perfect we thought. As we entered the walled city we were met with walls of tourists and had to negotiate our bikes and trailers along the narrow alleys of the entirely pedestrianised city without knocking the ankles of too many people. Many of the alleys were steep steps so we tried to find a way through that we could get the bikes. Having been round 2 if not 3 circles and feeling somewhat bothered I finally sat with the bikes by the cathedral while David hunted for the particular alley with our apartment. As it was we were only about 100m away and only had to get the bikes up 5 steps. I thought we were going to have a ‘Venice’ moment (see last year’s blog where we had to lock our bikes on the outskirts of the city and lug our bags separately). I was so relieved when we unloaded everything and settled into our perfectly satisfactory little studio. Air con, quiet, central, a small bathroom and little kitchenette served our purposes well and was reasonably priced after the hype we had read about how astronomically expensive the city is. 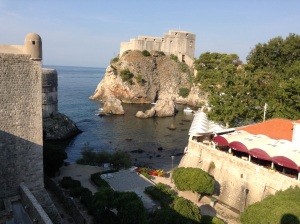 As we rested a thunderstorm broke out. Our first rain since Italy and we were safely inside! We ventured out in the late afternoon, found it only took a few minutes to stroll out of the walled gates without bikes and went to buy some food. We passed some busking cyclists and stopped to chat. In their mid 20s they had been on the road a year (but had only passed through Spain and Italy before crossing to Croatia so not cycling every day!) and proudly told us they had been ‘wild camping’ all the way. Wild camping in my mind is for extreme emergencies as the thought of not having a shower at the end of the day is too much! Must be getting older. 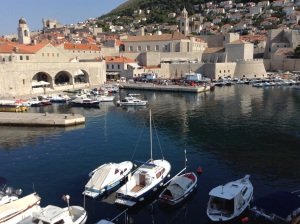 We cooked for ourselves (will treat ourselves tomorrow) and now sitting in a square round the cathedral, jazz playing in one corner and cacophonous noise of 100s of people chatting (most of them smoking as it seems almost compulsory here) with music reverberating off the walls. Looking forward to exploring more tomorrow and hoping an early start will beat the inevitable august crowds.