(David writing this) Today was a mixed blessing – a sort of getting from A to B day across some fairly boring landscapes, but with a spectacular place to explore in the middle.

We started with a puncture on one of my trailer tyres. Only the second so far but the 20 minutes it took to change the tyre had damp consequences later. We started with a fairly tough climb and then descended across a very open landscape. This is not how Cappadocia is marketed but is fertile land between the tourist hot spots. We could tell we were in    country by the number and quality of the coaches – both high!

Then we started climbing again across a fairly uninspiring plain, although there were some lovely wild flowers, Someone had built a massive thermal holiday complex just off the main road, but there was no sign of traffic going to this enormous complex. All the signs of a white elephant, probably funded through tax breaks. 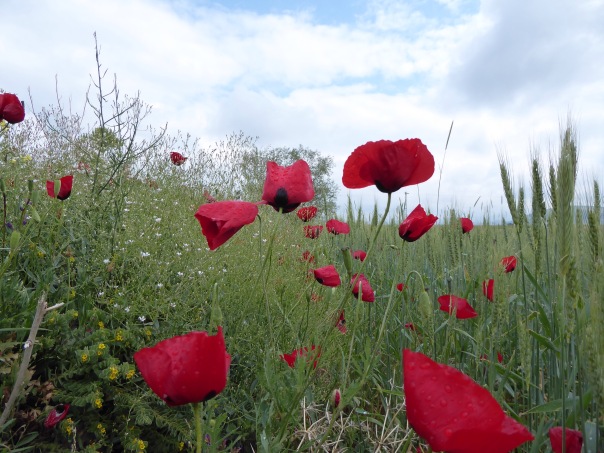 We had 53km to cover to get to Derinkuyu but, about 7km from arriving, the heavens opened and it rained and then hailed with massive hailstones that hurt our faces. We togged up but the road was instantly wet and the passing coaches (of which there were many) sent spray water all over us. We arrived at the town wet through, looking like drowned rats and feeling a tad cold. The Turks in the restaurant did not bat an eyelid and you would have thought dripping cyclists  arrived every day. We were shown where to hang our gear – changed into dry clothes and had tea and something to eat. It occurred to both of us that we would have made it to the town in the dry if we had not had the puncture. But then again, the rain may have come earlier!

Derinkuyu’s claim to fame is that it has the largest underground city in Cappadocia – the largest of maybe 40 such cities. They were developed in the C9th to C11th and provided protection for locals – mainly Christians against invading armies for months at a time. There was room in this one for 10,000 people to live underground! 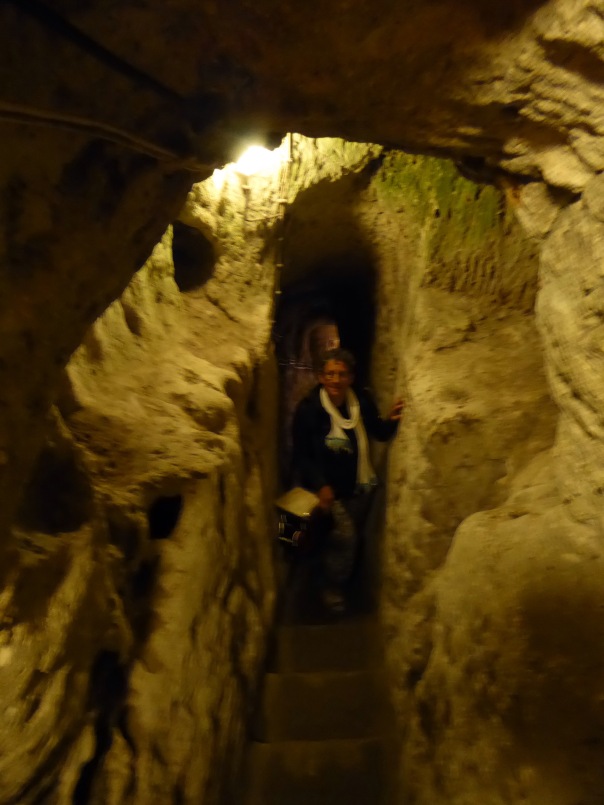 Only a small part is open to the public and our experience was influenced (in a positive way) by a large party of school children who were marginally ahead of us. They made a great deal of noise and took in the experience for all it was worth. The tunnels and staircases are tiny and steep, and the public part goes down 7 stories – so not for the claustrophobic. 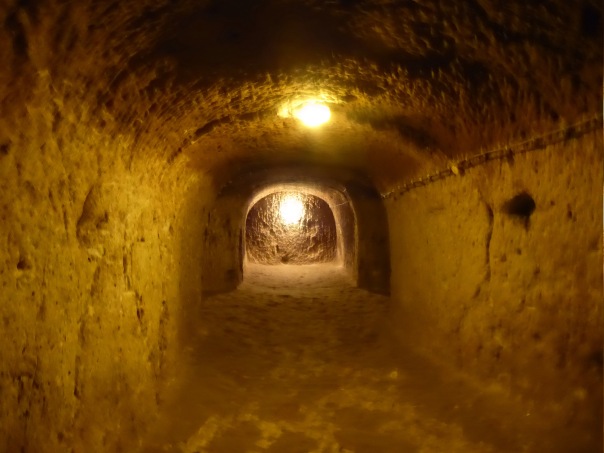 At one point we were trying to get back up a staircase and realised that there was only 1 way for both up and down, and as long as people kept descending there was never space for anyone to ascend! After 10 minutes there was a critical mass of ascendees who gently forced those trying to descend to wait or reverse whilst they escaped. It all brought home to us what a fantastic defensive achievement this was. The marauding mongols must have been mystified and frustrated.
There were – so it was reported – tunnels going many miles underground to allow people to escape and refuel those underground. The sheer level of engineering involved was astonishing – with churches, grain stores and living quarters all buried hundreds of metres below the surface.

After that any climb seemed a doddle compared to the exertions of the early inhabitants of the valley. After leaving Derinkuyu we climbed another few hundred metres and went up and down towards the village of Guzeloz which was in a gorge. We found a camping spot just out of the village by the little river in a well protected spot. More rain was predicted so we struck camp, cooked quickly and then it tipped down just as we had finished. We are now cozied up in the tent with rain drumming down – always quite a nice feeling. Hopefully everything will remain dry, but we shall see. This is not a brief shower – but better weather is predicted for the next few days.