Today we covered 50 miles and it felt good to be back in the grove.  We started with a superb Scottish breakfast.  Normally these breakfasts are to be avoided because there is a heavy price to pay on the scales the following day but, heh, no worries.  We are cycling, so sausage, beans and bacon are all on the “acceptable yes please” menu.  Restraint will reemerge in about 2 weeks. 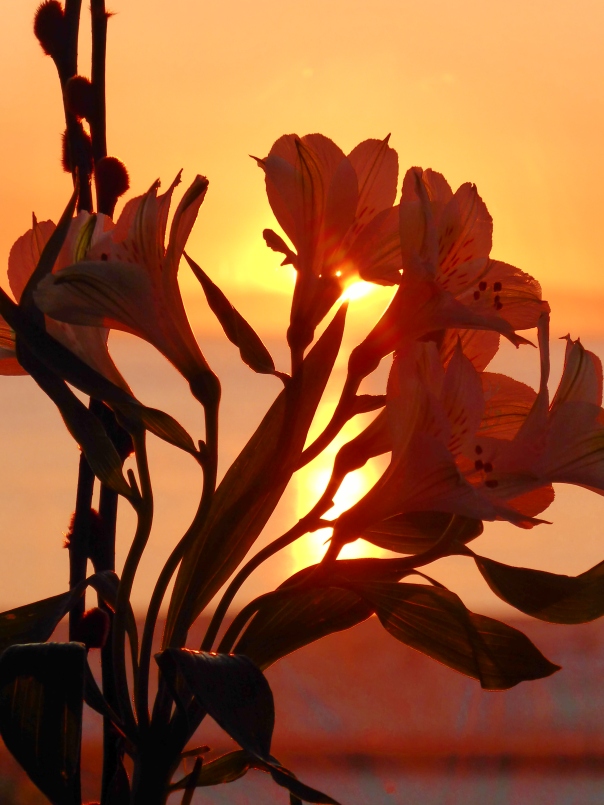 The best comment of the day came from a fellow cyclist who shared a conversation with an old lady he met.  It went like this

Cyclist: “Yes, I now have the time to cycle”

Old lady: “Do you know what we call your type?”

Cyclist (slightly concerned): “Err, no, what do you call us?”

Needs no further comment really – save that I aspire to become a coffin cheater. 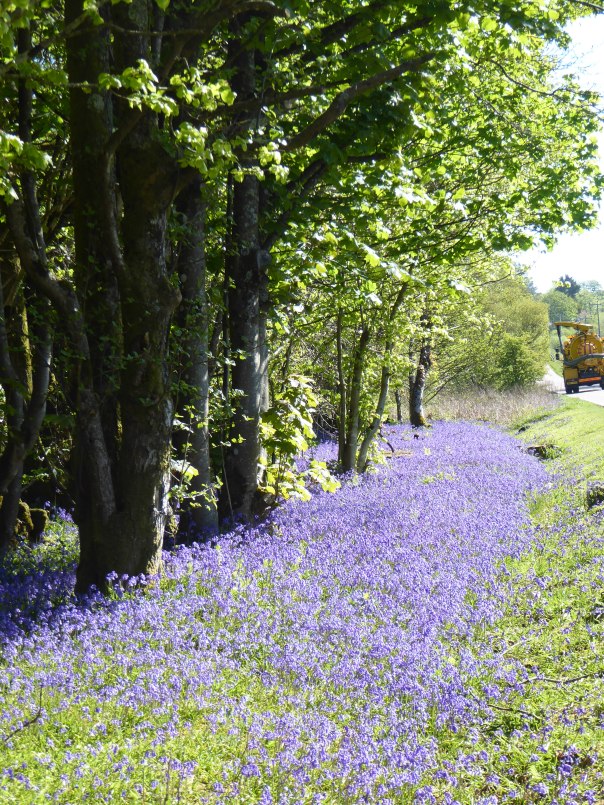 We got on the road by 8.30 and it was mercifully flat.  One of the problems this year has been that the usual “must get fit before we go” regime was replaced by a “are we too injured to make it?” dilemma.  The fact that we are here answers that question but we have started without having got ourselves as fit as usual.  It is boring to go on about Bernie’s torn ACL in her right knee (left one is fully functioning) or my back (painful after trying to get a tree stump out) or ribs (multiple breakages following mountain bike falls).  But the downside is that we have not cycled more than 20 miles fully loaded this year.  So we set of to cycle 50 miles with a little trepidation.

Flatness is temporary, hills are permanent.  So it was inevitable that we would hit a hill after a few miles, and we did.  But not a large one.  From the top we could see across to the islands of Gigha and beyond that, Jura.  The islands are sparsely inhabited but with few jobs other than subsistence farming and the occasional fish farm, they would probably abandoned entirely without tourism.  Part of the reason they are kept going is that the ferry system is heavily subsidised by the Scottish government – just as rural bus services are subsidised in England (and probably in Scotland).  This makes the fares very reasonable and keeps vital contact between the islands and the mainland.
Anyway, we were on a peninsular, not an island, and we ambled up the peninsular to Tarbet.  This is a pretty fishing village on a small spit of land that connects Kintyre with Knapdale.  Tarbet is, to be honest, a bit forgettable but we did manage to get a decent cup of coffee and bought a water jug for Sally and Richard, who we were visiting later. 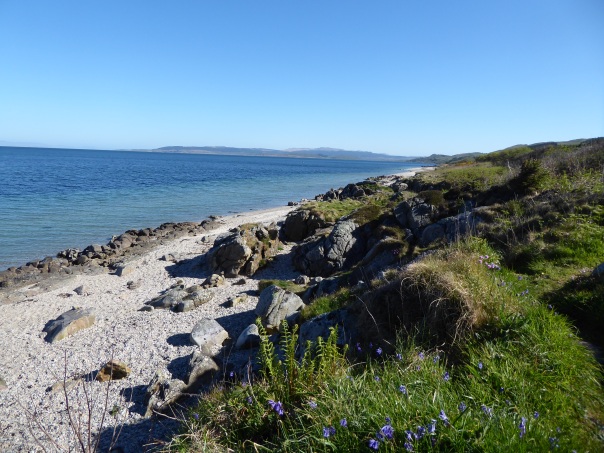 Everyone has heard of Kintyre (.. that song has a lot to answer for) but Knapdale is the next lump of land going northwards and is largely anonymous.  But it is stunningly beautiful.  We cycled up the east side of the peninsular, following the edges of Lock Fyne, to Lochgilphead.
Just before the town we came across the start of the Crinan canal.  This was built between 1777 and 1809 to allow access from Glasgow to the North West of Scotland and islands such as Mull and the Hebrides.  We cycled along the canal toe-path and then turned off to visit the town of Lochgilphead.  It was a pleasant little place with lots of local services.  We lunched on fruit on the grass edges of the loch and called Sally.  Having made arrangements we cycled the last 8 miles to Crinan and relaxed at the impressive Crinan Hotel.

Richard met us after a short time and we left the bikes at the boatyard, and packed all our panniers into a small boat – known as “Owl” – for the short trip to their own island, Eilean da Mhiane (I have probably spelt that wrong).  It is difficult to put into words the combination of total nuttiness and brilliance that Sally and Richard have shown by “retiring” from Clerkenwell to a small island off the west coast of Scotland. 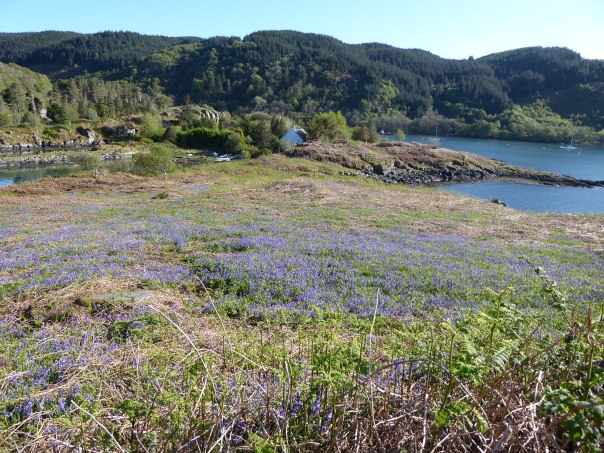 The name means “island of 2 mines” in Gaelic.  They have failed to discover or indeed explode either of the mines so far.  A 2 bed bungalow style house was built on the island in the 1940s, and has not been modernised since.  The garden is way overgrown, has bluebells everywhere and 3 stags regularly swim from the mainland to feast on the island’s delights.

We spent a magical afternoon and evening with them.  I hope I have set Sally up with a blog:  www.sallylion223@wordpress.com which will record their adventures.  The photos tell a better story than words but perhaps the highlight was watching the sun go down over Jura, just over the bay. 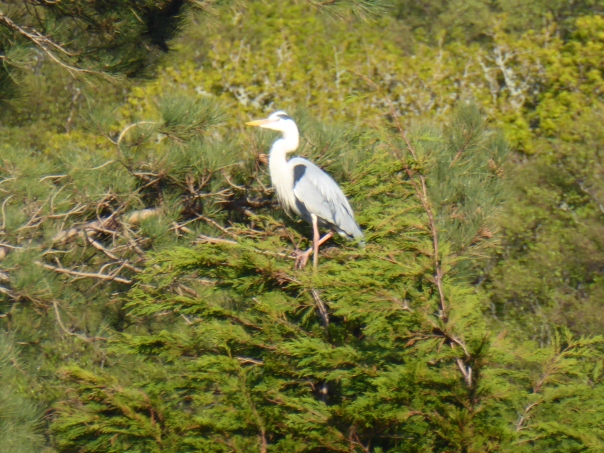 It is a truly magical place and whilst you have to be mad to embark this type of adventure, it is the very best form of madness. 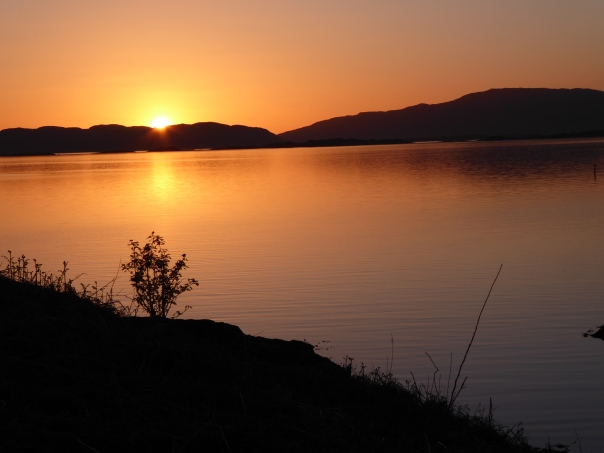 They both seem energised and excited by challenges ahead – and there will be many.  Winters will be tough but it was perfect on a hot afternoon in May, pre-midges (mostly) and with a cloudless sky.
We retired to the “guest wing” at about 10.30 full of admiration and a little envy.