(Bernie) We had a rather odd night in which we either had the fan on, and it sounded as if we were in a helicopter, or fan off and were too hot. Having fallen asleep at 8pm David woke up at 2am and was up for 2 hours writing the blog and reading and then came back to bed – but still managed about 9 hours sleep. We were slightly out of practice packing up our stuff but got everything packed and breakfasted and were on the road by 9am.

The first part took us over a peninsular with some hills but down the other side and on the way to Trivandrum was then flat. We found ourselves on a brand new dual carriageway for a short while but it had a shoulder and good surface and not too much traffic and, after a short while, we were able to move onto the now empty old road running parallel.

Trivandrum is a city of a million people so we were a bit nervous at how we would traverse it but David’s skilful navigation with the Garmin took us on small roads around the airport perimeter and then directly by the coast. Busy in parts it was all fine mostly with buses and tuktuks to negotiate, as well as thousands of motorbikes. The Garmin has been invaluable. The free street maps David downloaded were incredibly accurate, and in the absence of any detailed maps, completely essential in allowing us to find a network of small side roads which has mostly meant we can avoid the busiest roads. Google maps is also very useful in plotting the route and those critical last few km finding our accommodation. Technology is wonderful!

As we were coming out of the Trivandrum conurbation we saw a cyclist on the other side of the road. He was a completely bonkers German man (about our age, or possibly older) who was cycling on a bike he had brought in India for 200 Euros (and he was ripped off) and carrying a heavy rucksack on his back. He seemed rather starved of conversation but mainly wanted to discuss how cheap our accommodation had been and the price of various guest houses he had been in. He also gave us a detailed guide to cycle route in Germany – useful for us on our way to Australia. He was irritating but armless, and no doubt he thought we were bonkers too!

There had been a distinct lack of tea/coffee houses and shortly after Trivandrum we were able to perch under a tree by the sea and brew up our first decent cup of coffee since we arrived. It was next to an enormous church. These churches, like huge ornate wedding cakes, were dotted all along the way. Christianity/Catholicism is the predominant religion in Kerala so I am sure they are all full. Like all large, ornate religious buildings they seem incongruous when cheek by jowl with poor shacks; but all religions seem to have the need to build these symbols of power and prosperity wherever we have been in the world. Maybe they are a symbol to followers that they too will have prosperity by adopting a religion with affluent symbols.

We then met 5 English people on a tour on mountain bikes going the other way, with their Indian guide. He was not in the least phased when we shyly admitted we had plans to cycle to Delhi. “I have cycled from Kashmir” he explained, with clients. His advice was invaluable about how to plan our days in the Western Ghats to ensure we had accommodation. His group were 2 parents from Stafford and their 3 adult children who all lived in London. The father looked as if he was doing this as a family bonding exercise but was feeling the heat a bit much. We chatted for a few minutes and then wished them well. All their gear followed in a TukTuk – that seems a pretty good model!

We next took a route of small roads hugging the coast through small villages and towns. Sometimes the road disintegrating in small patches we became expert at weaving a path through bumpy pot holes but mostly even the small roads were pretty good. It gradually became hotter but there was lots of shade from palm trees so it was reasonably bearable and we knew we would acclimatise over time. At one point we were encouraged by locals to follow a road that appeared to be a dead-end at an estuary, but the presence of buses let us to suspect it was not. Sure enough, a new bridge appeared. However much money had been spent on the bridge, nothing was spent on the road either side which was pretty degraded.

The road ran for miles between the sea and an inland lake, and was pretty built up. We looked for miles for somewhere to stop for lunch and eventually found a church. We ended up in the shade of the porch where there were convenient chairs and shade.

By 3pm we had reached Varkala and found ‘Rita’s Homestay’. A comfortable room, even hot water for the shower (a first this trip!) and a few minutes walk to the beach. Varkala is described in the guidebook as ‘one of the 10 best beaches in the world’. A crescent of white sand is enclosed by red cliffs dotted with palm trees. It is also described as a ‘backpackers’ resort with a ‘cool vibe’ (just right for us then!) and along the cliff top was a series of cafes and restaurants catering for all taste in the world.

Earlier in the day I was commenting that I was already feeling like a ‘tourist snob’ congratulating ourselves on finding small roads and villages that the usual tourist would never see. However, I almost literally ate my words as I tucked into a delicious omelette and wonderful cappuccino. I’m quite happy to indulge in the tourist benefits when it suits! We then strolled along the beach and back as the sun began to set (a theme so far of each evening of the holiday) feeling relaxed and more awake than the previous day. In part, I suspect because we were getting over the jet lag (or maybe we kid ourselves and are just not fit enough yet but are getting used to the heat and building up the fitness). 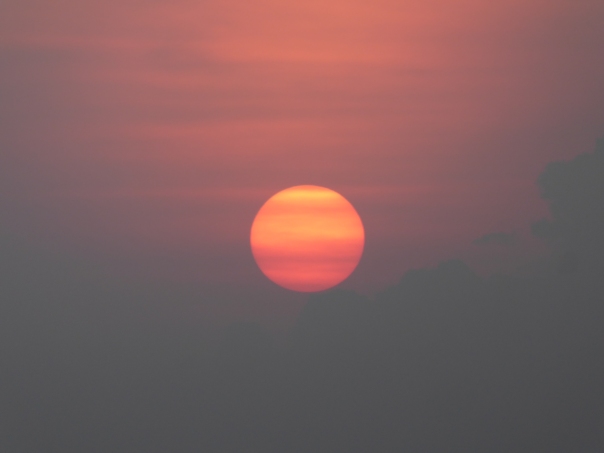 Later after dark we strolled out again for cake from a German Bakery and Mint tea to take in a few more tourist treats while we had the opportunity and to mull over another fantastic day. So far everything exceeding expectations and rapidly falling in love with this part of India.