Today was a welcome day off the bikes. It began with a bit of legal work for me (but not too much) and some future route planning for Bernie. We were then off to catch the bus to Periyar Wildlife Park for a nature walk. We were joined by Sophie, whose boyfriend had gone on an all day walk which, tragically, we found we fully booked so we had to console ourselves with just a 3 hour trek (I am not sure irony works well on a blog). However we soon realised we had opted for a better choice.

Our guide was Ram Khrisnan, a hugely knowledgeable local young man, who spoke excellent English, was a mine of information about the park and pointed out things that we would never have seen. Over the next 3 hours we saw hornbill, egrits, herons, elephants, a red mongoose, tree squirrels, monkeys and an owl. We saw a tiger’s paw mark, but no tiger! I will let the photos speak from themselves to express the sheer beauty of this place.

It was peaceful and, in the shade, not too hot. The park was at 900m height, and constructed around a reservoir which was build by a Mr Peabody in the 1880s. That created a 26 square km lake, which was a haven for all types of animals. It is good to know that the British did some good in India, even if it was by accident. 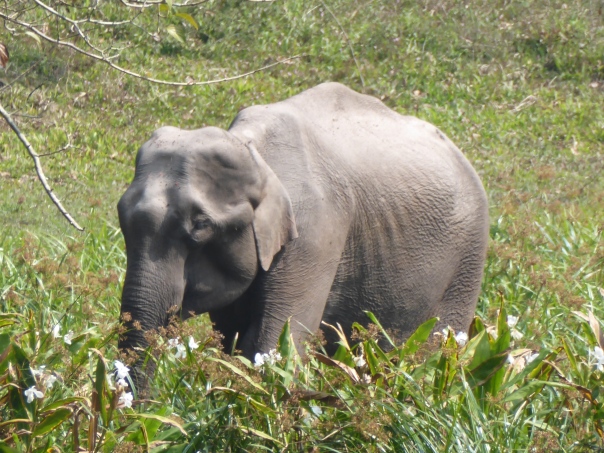 In the bus on the way back we met a family from Rhode Island and a couple from Delhi, chatting on friendly terms to all. Bernie even had a nice gentleman give up his seat for her – but I thought she looked far too healthy for that!

An afternoon of reading and relaxation followed, only punctuated by an attempt to go out to buy Duck Tape, as we ran out on the last set of repairs. My grasp of Indian languages and etiquette is pretty limited, and so trying to explain what we meant by “Duck Tape” to a series of shopkeepers produced hilarity all round. No – it was not parcel tape but a bit like that but stronger. A larger roll of parcel tape was great but not quite what we needed. Electrical tape was getting there, but not quite right … but it may be the best we could secure.   All this was done with huge apologies on all sides (especially ours) as we tried to explain what we needed.

In the evening we had booked seats at 2 cultural events, one after another. The first was a Kalaripayattu demonstration. This was an ancient form of marshall arts dating back 3000 years, from which many of the other more common marshall arts developed. It involved some pretty impressive acrobatics, terrifying sword and stick fighting where one false move could end up with an urgent need for Bernie’s medical skills (at best) or an undertaker at worst, and eventually jumping and tumbling through burning hoops. Pretty impressive all in all, even if the performers may not have great longevity. 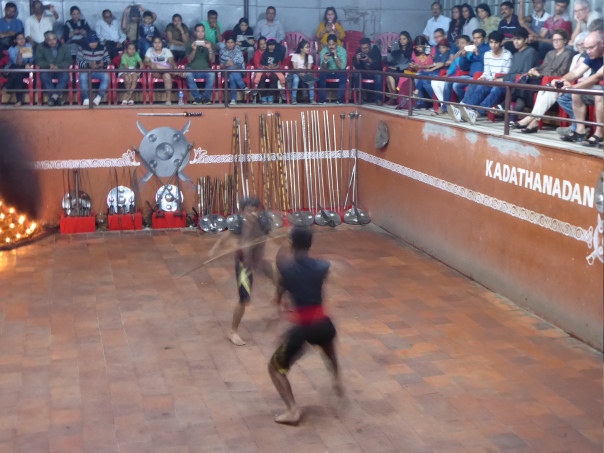 We then walked next door to the Kathakali Centre for a classical Indian dance show, with stories acted out in mime and drum, traditional singing (of the “wailing” variety) music, with emphasis on hand and face movements. It was an experience to be there, and was well done.

Both performances were put on for visitors, but 19 out of 20 million visitors to Kerala are from within India. That was reflected in the audiences for both these events, which were very predominantly people who knew far more about what they were watching than we did. Thus watching the audience was almost as fascinating as watching the performances.

To bed early, knowing we are back on our bikes and have another big climbing day tomorrow.