Having taken on board all the warnings about not cycling in the Game Reserve we had arranged with Jenith that he would take us by jeep to the entry point. So at 6am we were trying to fit 2 bikes and all out kit into a small jeep in the pitch dark with the help of a couple of torches. With everything tied in we set off.  For anyone interested, by the end of today we had cycled 8,170km from Bewdley on this trip!

I tried not to be too disturbed that the windscreen was totally misted up and Jenith was driving with his head hanging out of the side of the jeep to see where he was going, telling myself that he had driven this stretch of road hundreds of times. Luckily it soon started to get light and as it did the windscreen cleared. The road was full of lorries and Jenith explained that the road is closed between 10pm and 6am so the lorries had been waiting at the check point to start driving through. We saw a mother elephant and baby as we drove through and a few deer.

Mudumalai Tiger reserve merges with Bandipur Tiger reserve at the Tamil Nadu-Karnataka border so we had to drive through both to safe cycling country. At the checkpoint at the border there was a huge queue coming the other way as the border guards closely checked each car. We asked what they were looking for and were told it was searching for illegal alcohol. It can be brought cheaply in Karnataka and smuggled into Tamil Nadu and Kerala where alcohol is illegal (yes, we have been ‘dry’ since we left the UK and not missed it at all so far). The delay getting through on our side proved to be due 2 lorries inching across a narrow bridge without jamming themselves completely. An inch by inch process with much gesticulating on all sides.   Once that was cleared, we had an uninterrupted drive through to the edge of the wildlife park.

After about an hour Jenith dropped us at the Bandipur entry point, just as the sun was shining through. The jeep ride put us in easy striking distance of Mysore.

We packed up the bikes and were off. Shortly after David got a puncture (number 2). As he mended it he was soon circled by a group of boys watching intently – all were quiet and polite, whispering to each other occasionally and pointing and giving us cheery waves as we set off again. 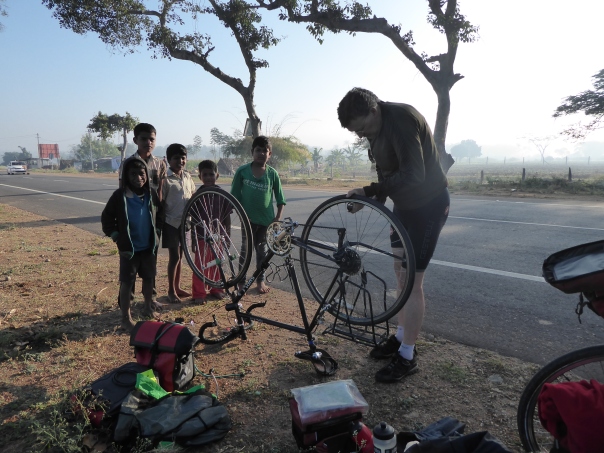 The road was wide with a good surface and quiet on Sunday morning. Gently undulating with slightly more down than up so we ate up the kilometres quickly. We first stopped for breakfast at a restaurant that advertised omelettes, only to be told ‘no eggs’. David still could not face curry for breakfast so pressed on and soon stopped at a Coffee chain that we had seen before that mimicked Starbucks at relatively exorbitant prices. However it provided good sandwiches and passable coffee. 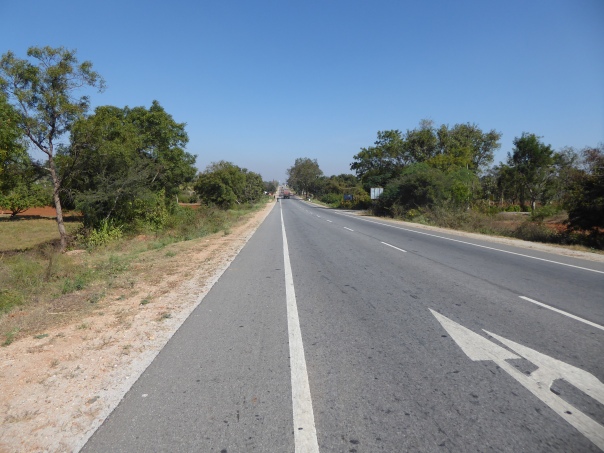 At Nanjangud, 20km south of Mysore, traffic picked up and David navigated us onto a parallel side road. As we have found before, 100m away from the main road was like a different country. Small very quiet roads through pleasant rural villages where the fields were ploughed with oxen and farmers dried their hay by spreading it out on the road (a small track either side for bikes and motorbikes but other vehicles just seemed to drive over it).  As we came into the City we saw several cows painted yellow ( we later discovered it was to do with a festival tomorrow) 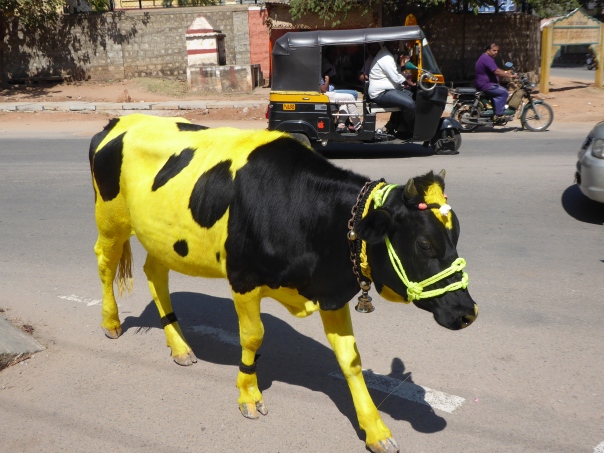 The approach into Mysore was much less congested than expected and we were soon phoning Suresh, our ‘warmshowers’ host for the night, who came and met us to direct us the short distance to his home. For those new to the blog ‘warmshowers’ is a hosting website for touring cyclists (www.warnshowers.org) that works a bit like couchsurfing. Cyclists offer their homes for hospitality and when touring can prevail on other hosts for a bed.

Suresh and his wife were utterly charming and showed us into a large room with it’s own shower. We were soon cleaned up and chatting over tea. Suresh (who is in his 60s) is a keen trekker and cyclist and trekked to Everest Base Camp a few years ago.

We cut short our initial conversation as we were keen to make the best of the afternoon by seeing Mysore Palace. We walked the kilometre or so to this extraordinary building. Most of the palace in fact only dates from 1912, the previous palace having burned down in a huge fire. The Maharani at the time commissioned a British architect to design and build the new palace with no expense spared (at least to make it fire proof). The resulting building is a huge, ornate fusion between the Colonial Brits and the Maharaja. It felt rather Disney-esque, knowing it was all quite modern but non-the-less was impressive. 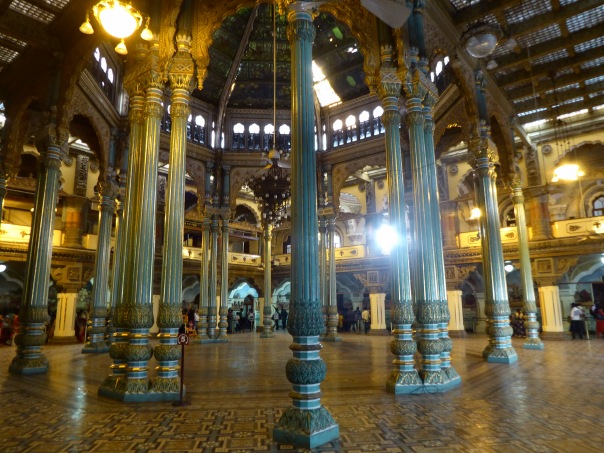 That however was not the major impression of the day as we were looking around on a Sunday afternoon the day before a holiday – and the place was absolutely packed. First, we had to leave our shoes at the shoe leaving desk (4 rupees but loose your ticket at your peril). We were then swept into a mass of humanity round the state rooms. Think of the tube at rush hour and then double it, add in children and women in bright saris and everyone taking photos (mostly selfies) and walking round with officials blowing whistles and moving you on. At one point we met a French couple who just said “It’s crazy, crazy, crazy”, which of course it was. There was no choice but to move and at the pinch points through doors and up stairs it felt very crushed. But everyone was chatting and animated and we just went with the flow and absorbed the unforgettable experience. 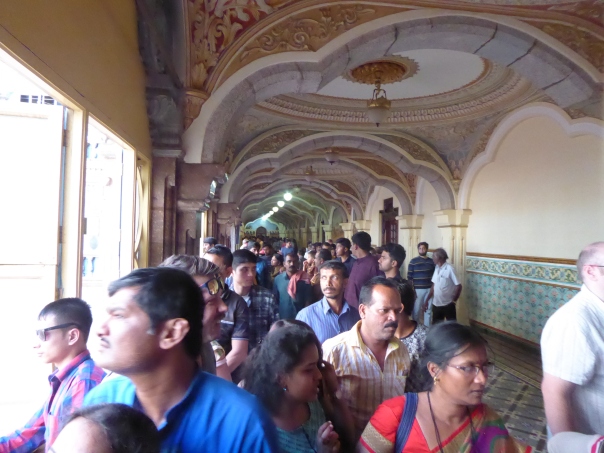 We also took a side trip round the museum and residential quarters with a moderately interesting audio guide which gave a bit of the history. We did this first and as there were few people in that section and so were totally unprepared for what lay ahead!

Finally we tumbled back out into the open, found the magic footlocker ticket and retrieved our shoes and were able to breath again. The heat of the sun was diminishing as we looked round the outside but were feeling pretty exhausted.

Back at Suresh’s home we were fed a fantastic home cooked meal. I suddenly realised I was famished and we wolfed down biryani, another type of rice dish and home made onion cookies and cakes. All vegetarian and delicious. We chatted some more with Suresh but soon my full stomach and tiredness overcame me. Another memorable day – unforgettable experiences, wonderful hospitality from our hosts and more promised for tomorrow.