This may have been our last day with any significant climbing. Most of Rajasthan is fairly flat and so this sojurn amongst the hills may have provided us with the last acquaintance with our bottom chain rings. 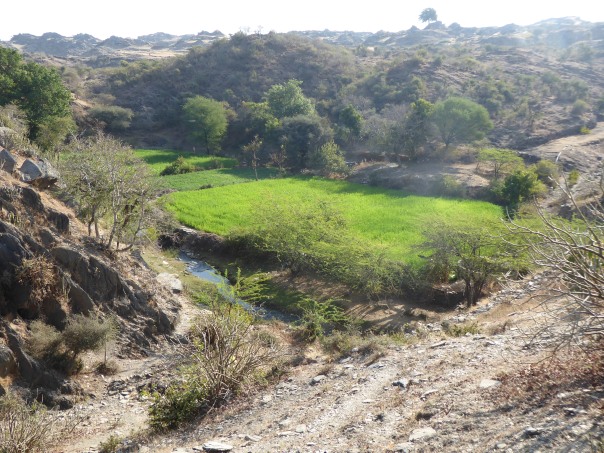 Waking at 6am was a bit of a shock after 4 days of lie ins. We both feel that Jacinta made a serious effort to feed us so much during our stay in Mumbai that we ended up replacing much of the weight we had shed in the first month. Now we were back on the bikes and had to see if we had the energy and drive to make part 2 enjoyable. The answer was easily – yes – within a short time. After 4 days off, we cycled north out of Udaipur on the reasonably flat roads at great pace – as if to prove to ourselves that we could still do it. 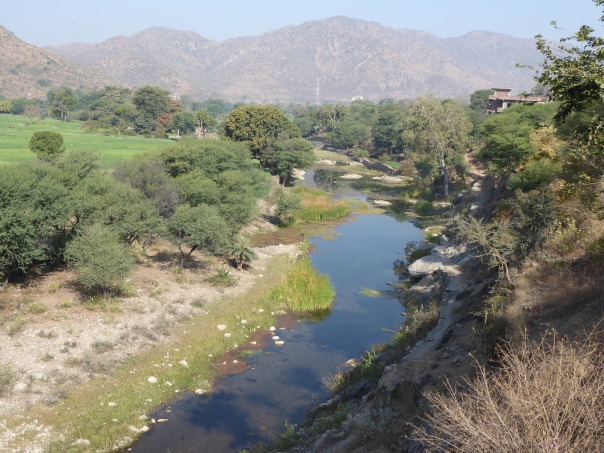 The scenery was so different to southern India. Rajasthan is desert scrubland (not rolling sand dunes) and so is reminiscent of Southern California. The scrubland, cacti and sandy yellow hills were so reminiscent of the hills around Los Angeles.   The road was in good shape and we made solid progress through the morning, including doing a series of fairly large climbs. 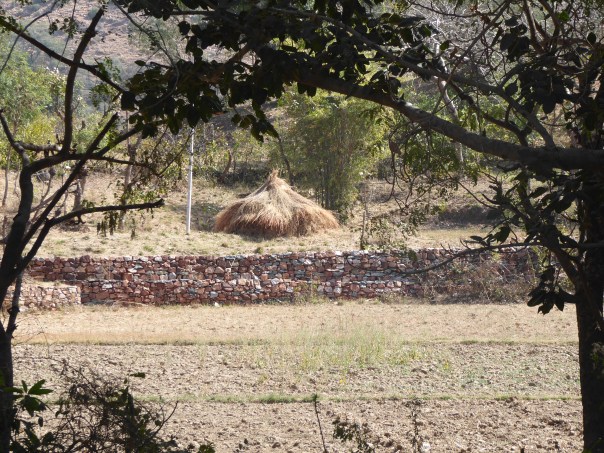 However this is not an arid land. There were rivers with water in them (i.e. not just flowing in the monsoon period). Irrigation made the fields next to the rivers productive even if the wider hillsides were uncultivated. Irrigation is the key to success here. We saw a bullock being driven round and round in circles to power a pump to lift water into a field. This method of irrigating crops has probably been unchanged for millennia (but most pumps were electric now).

One change from the south is the confidence of the women. Rajasthani women wear spectacular nose rings and have no problem in shouting encouragement to us, particularly to Bernie, as we go past. I cannot pretend to understand the words they use but it is all very encouraging and I would guess most translate something like “all power to your elbow” or “keep trucking”. They may of course be saying “stupid foreigners – don’t they realise that it is easier on a motorbike” but that is not what seems to be written on their faces as they cheer us on. 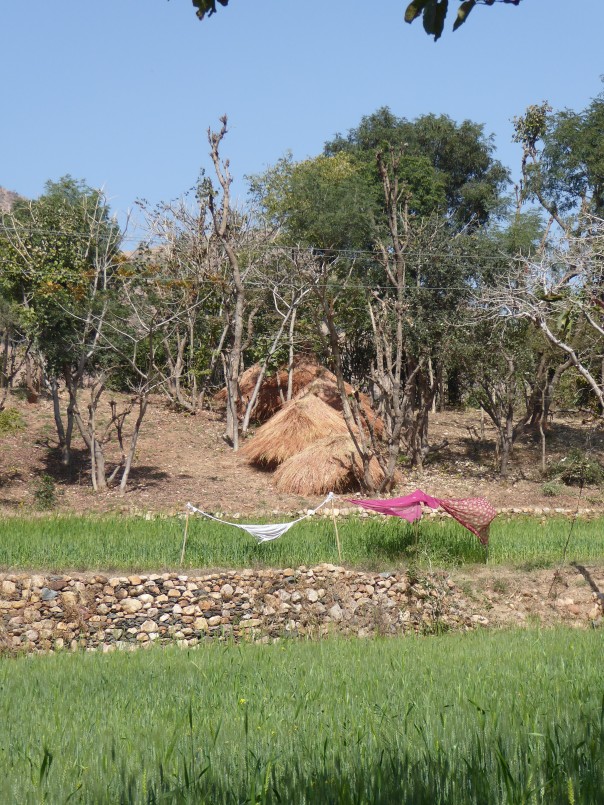 Children call out all the time – usually from the fields (so why are they not in school?) where they are working or from a brickmaking plot at the side of the road. They call, cheer and occasionally try to out run us if we are going slowly uphill (and sometimes succeed). It is not quite the Tour de France but you get the idea.

After 75km and at about 1.30pm we arrived in the town of Kumbalgarh, and found our hotel. No internet so this will be posted in a few days time.

Then we changed, ate lunch and headed off for the Kumbalgarh Fort, 8km out of town (and another 150m up). This was billed as the second most important fort after Chittaurgarh. There was, however, nothing second rate about it. It was the best “fort” I have ever visited by a country mile and makes any fort in the UK look like a pile of bricks. 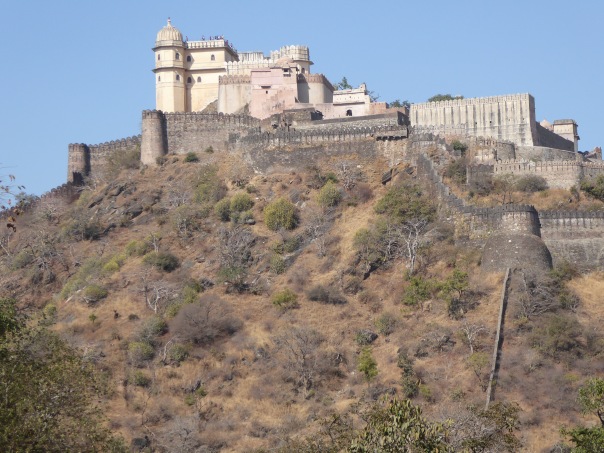 The walls for the fort are about 50m high in places, with a series of huge towers connected by massive walls. These walls are so wide that 8 horses can side along the ramparts. The walls are 36km long – that is right – 36km of walls! 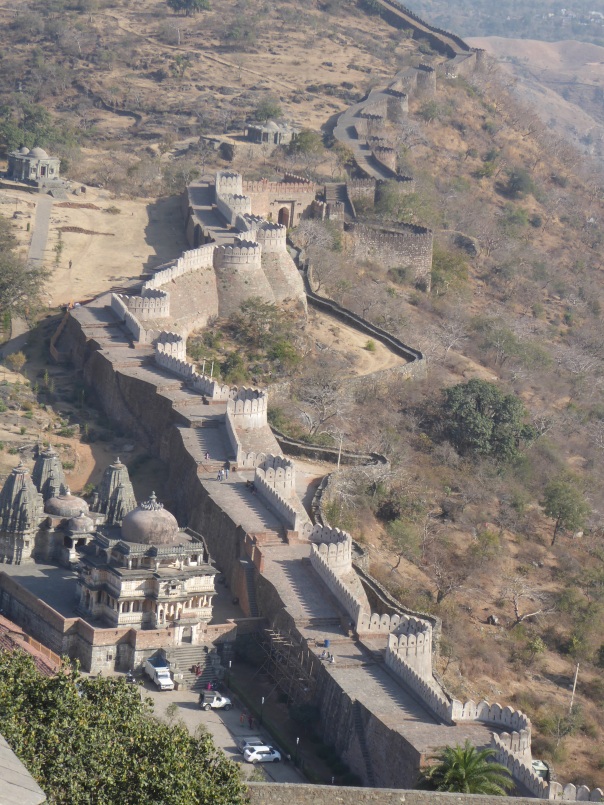 Inside there are a whole series of fortress buildings on a high mountain that made the edifice virtually impregnable. It was attacked many times over the centuries and thousands of men must have died attempting to take the fort. Control was only lost once by the local leaders, and then only for 2 days! Not a bad record of defence, and one can fully see why when standing on top of the highest tower. 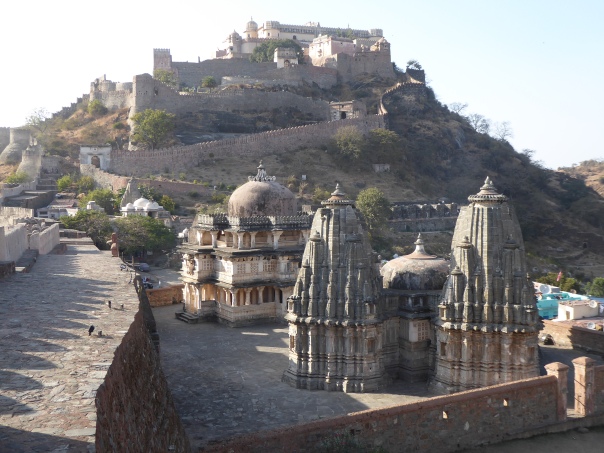 95% of the visitors to this enormously impressive Indian fortress were Indians. There were few westerners (not only because we were charged 200 rupees compared to 30 rupees for Indian nationals) but mainly because this is slightly (i.e. 80km) off the standard tourist trail. But it is well worth it for the sheer grandeur and scale of the fort.

The back to the hotel and relaxing tea and a bit of work on the book proofs – reality is beginning to re-emerge after the idyll of the last month. 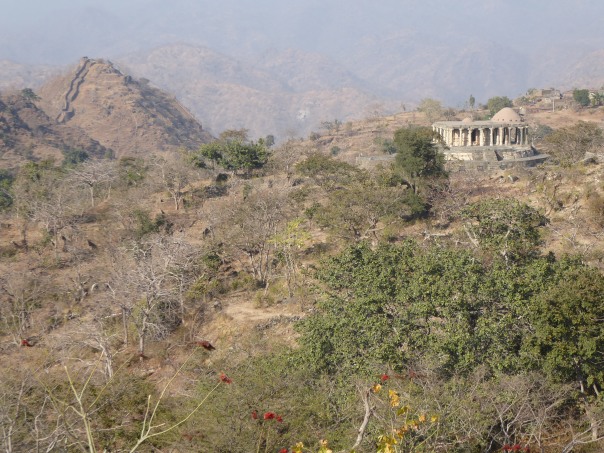 One incident demonstrates so much about India. As we came back to the hotel from the fort, we were asked by the hotel under-manager to store our bikes at the entrance. The hotel is arranged in a series of bungalows and there was room outside our bungalow for the bikes – so we said we would prefer to store them next to our room. We are, to be fair, a bit paranoid about this. He insisted that we park the bikes by the entrance as if there was an implacable rule that this was the only place bikes could be parked. We insisted we would park them by the room. At the start of our trip we might have just accepted the instruction, but we already knew we could park the bikes by our room and so stood our ground. In any event, we had control of the bikes and so just defied the instruction and wheeled them to our room. What does this show? Apart from showing how stroppy we have become, it illustrates something about the Indian concepts of “rules”. The under-manager had made up a rule that the bikes had to be parked by the entrance (possibly because that was where motorbikes were parked) and once the rule was made it became a matter of honour that his rule should be obeyed. We probably acted wrongly by defying his authority by insisting on parking our bikes by the room and, I suspect, upset him by not abiding by his rules. The fact that there was no logical basis for the “rule” and that we did not cause any problems for anyone else by keeping our bikes in a more secure place was not the point. It was not for us to make the rules! It was a cameo that told us more than a little about the way society works – both here and in other places (including the UK).

However, security is important for us and once we just insisted on taking our own course, that was that. As I write this, the bikes are locked up just outside our room!

Bernie: While David was reading his book proofs I stood on out terrace for an hour watching fantastic bird life. We had splashed out a little more than our usual guest house and took a ‘special offer’ on booking.com. The hotel was very smart and we were upgraded into a ‘premium room’ (a reflection of masses on hotels on the run up to the fort and a quiet time of year.) We had a lovely room with a terrace overlooking the lake. I must have seen at least 15 types of birds within a few meters of the terrace (all unidentified apart from little parroty types) and watched a troop of monkeys on the other side of the lake gambling about in the sunshine. I was again very glad to have packed our little pair of binoculars. All in all a fantastic day. 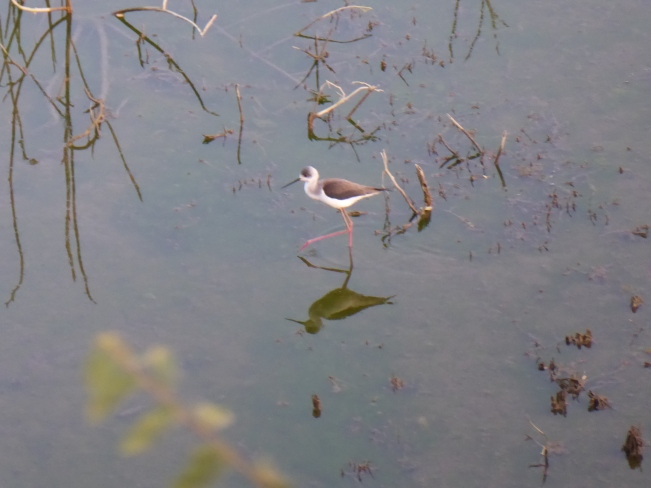 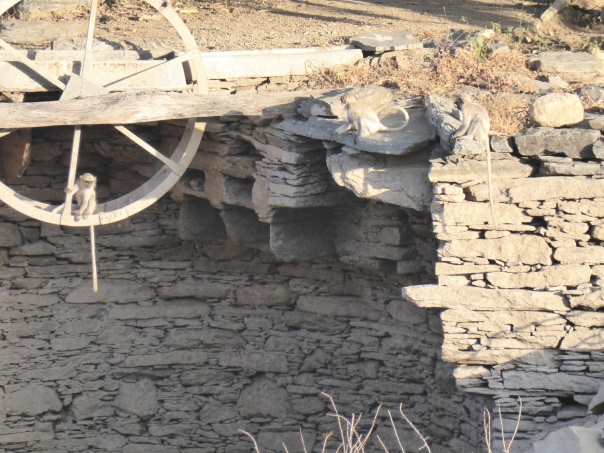 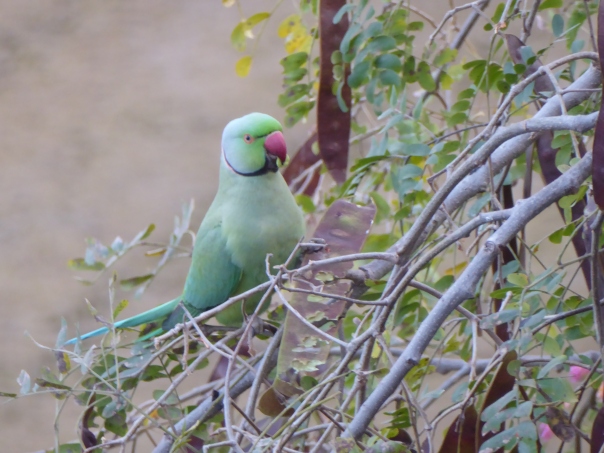