Today was the ultimate A to B day – so, in the absence of exciting things to describe, its time for some stats. To date, we have done 2,824km in India. If we had left Kanyakumari and driven directly to Delhi on the shortest route, we would have arrived in Delhi today (as the distance is 2,810km, which is slightly less than we have cycled so far in India).

The distance by air from Bewdley, England to Hobart, Australia (our projected final destination) is 17,652km. Since we left home in 2014, we have covered 10,138km. That means that, in 4 years – 40% of our “decade” – we have covered about 57.4% of our goal, which is to cycle the distance (as the crow flies) between our home and my brother’s home in Hobart. Mind you, it would be one hell of a crow! But it does mean we are on target to achieve our goal and may even end up covering a few extra km along the way.

All those numbers make up for the fact that today was about 100km on a virtually straight road, slightly downhill in places, with scenery that was virtually unchanged all day.

Ajmer was a great city but the air pollution – as with all of India’s cities – is a major issue for cyclists (and for everyone else of course).   Factories, fires burning in the countryside, lorries, tuktuks and motorbikes give off huge quantities of noxious fumes which are slow to clear. It is a major challenge. India has a low per capita emissions of greenhouse gases but, with a large population, the country as a whole is the third largest emitter of greenhouse gases after China and the United States. A 2013 study on non-smokers has found that Indians have 30% lower lung function compared to Europeans.

We gradually cleared the city and the air improved slowly. Then it was head down and 23km an hour steadily over the plain, but with a good road surface. This was cultivated countryside, with big fields and occasional tractors. These are often fitted with 2 large speakers (on each side of the tractor driver), blasting out Indian pop music to keep the workers happy. We cannot tell the difference between the songs (yet), but bounce along to the music.

After about 80km we got to Kekri, and bought some fruit (which I then left on the stall). Clearly my brain is deteriorating with the fumes! We pressed on with the main road going off to the south. We should have stuck to the main road and done the extra 10km. Instead we followed the straight road which had a much worse surface. We bounced from one pothole to another, and in places the road had no tarmac at all. 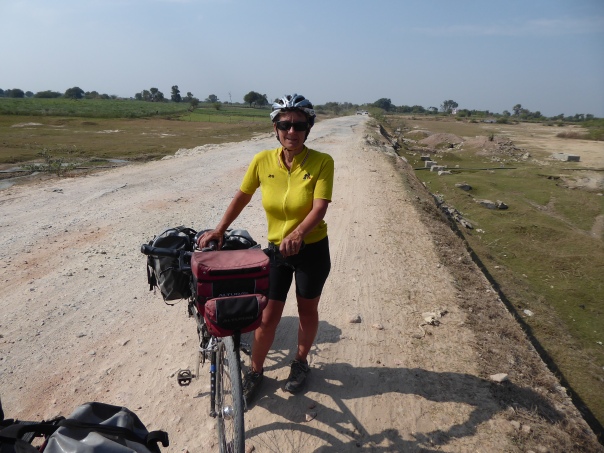 We crossed the vast Bharatpur Reservoir, which provides irrigation water for a vast area, and eventually reached the little town of Deoli where we had booked a hotel.

A little “contra-ton” followed as we insisted the bikes should be locked inside and the hotel staff could not understand why we could not lock them up outside. The staff were astonished we stood our ground (and we would never have done so a month ago), and then they compromised and found a place for the bikes inside. It is really hard to explain that our bikes are not only worth thousands of pounds, but that all the parts are nearly irreplaceable in India and so any small theft of a saddle or wheel may bring our tour to an end. However I think they finally understood and accepted that these really strange westerners have to be accommodated with their unusual requests.

We ambled around this lovely small town, confident in the knowledge that we were the only Europeans here (and getting strange looks from those who had the courage to stare). But we also had an excellent vegetarian meal and so felt pretty good about the whole place. Only 60km to Bundi tomorrow.