After 24 hours after we arrived in Jaipur it was clear that my muscles needed a few days to recover from the bruising of the fall, and so we decided to end the cycling here. We only planned a further 3 days on the bikes to reach Agra, but that can wait until the next trip. So we are holed up, reading and recovering at the wonderful Ashok Club and will head off by car to our friends in Delhi tomorrow. 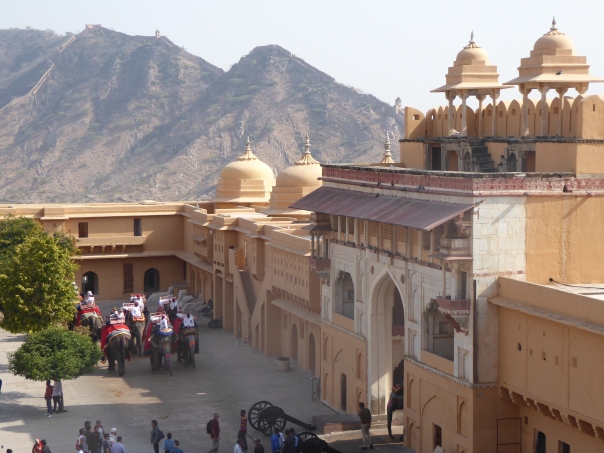 This morning we visited the amazingly beautiful Amber Palace, just under 30 years after we visited together in 1988 (when we also stayed at the Ashok Club). It was still stunning and impressive, but also reminded us just how much opulence one person (or perhaps more accurately a series of individual rulers) can create with limitless wealth and no social conscience about making the poor pay for the follies of the rich. The place was a honey pot, full of tourists from every developed country in the world and has been described in numerous guides, blogs and advertorials. So there seems little point in adding our superficial views to those of others who are far more informed. It seems better to use this last blog to reflect on what we have experienced, learned and endured over the last 2 months.

First, we have had a really enjoyable time. My injury over the last few days do not, in any way, affect our overwhelmingly positive view of India and Indians. But we have realised that the idea of “India” is comparatively modern. It is arguable that the idea that there was a country called India was a creation of the British Raj because before the domination of the British, there was no “India” as such. There were a series of local fiefdoms, ruled over by maharajahs and their families, exercising power over areas that shifted depending on the outcome of a battle with a neighbouring fiefdom or, more occasionally, an external intruder like the Mohguls. When the Europeans came in the 18th Century, various local war lords saw their chance to get one up on their rivals by aligning themselves with the Dutch, the French or the British, often coming to rue the day they ever got into bed with the Europeans. For a long time, it was unclear which European nation was best placed to exploit the opportunity of these vast lands. However the East India Company gradually came out on top and then, in the mid-C19th, the British government effectively took over from a private company which had maintained its own private army to keep the local rulers under control and hence protect its commercial interests.

The maharajahs continued to hold and exercise real administrative power (jointly with the British) until 1947 when there was the botched “Freedom at Midnight”, which led to the creation of Pakistan and ultimately to the terrible loss of life in sectarian conflicts as Muslims moved to Pakistan and Hindus and Sikhs went the other way.

A single India only came into being after 1947 when skilled and ruthless Indian government ministers strong-armed the local rulers to give up their power and surrender to the single India. Goa remained a Portuguese colony until 1961 and the status of Kashmir remains fluid.

So perhaps we have come to realise that, despite different religions, wide-ranging communal histories and multiple languages, India functioning as a single, democratic country is a significant achievement for Indians. There were few amongst the British who left India in 1947 that would have predicted that this vast country would build itself as a successful state and remain as a single country. The credit for that goes to countless Indian politicians, government officials and those who hold or have held office in this amazing country.

Secondly, we should celebrate that one half of everyone on the planet who lives in a democracy lives in India, where democracy seems to be woven into the way people think and live. No democracy is perfect of course and India is no different in that respect, but that does not stop this being a country where the will of the people can and does change the government.

Thirdly, India is fantastically diverse. Cornwall is different from London, which is, in turn, different from the Highlands of Scotland. But the UK is (mostly) bound together by a common language. India has 26 official languages and thousands of dialects. The shape of people’s faces, the colour of their skin and the outlook on life moulded by a religion tradition differs markedly from one part of the country to another. The jungles of the south differ from the deserts of Rajasthan or the mountains of the Himalaya, with different climates, food and outlooks.

Although there is some commonality, in that about 80% of India is Hindu, that is like saying that all Europe is Christian without considering the different strands within each religion. There are different practices within different forms of Hinduism, and the demise of the divisions caused by the caste system is proving far more intractable to eradicate than Nehru hoped. And the 15% “minority” Muslim population is still more than 3 times the size of the whole UK population.

We have greatly enjoyed the diversity as it means nowhere is the same as the previous place. Temples vary greatly, art is different in different regions and the landscape influences everything.

Thirdly, the common thread we have experienced is kindness. India is a place overflowing with kind and generous people. We have had nothing stolen and never been the subject of a scam. Only 1 small hotel tried to overcharge us, and quickly backed down. The odd incident of hostility towards us from passing youths (usually trying to impress their mates, as they are wont to do the world over) stands out as so different from the invariable reaction of welcoming strangers. People here are proud of their country and want visitors to think well of India and the Indians – and we do.

Fourthly, this is still a young country with many, many children. In 1988, when we last visited, it had a population of 800M. The population is now over 50% higher at 1,345M. It continues to grow at about 1.17% per year with a 2.41 fertility rate. Millions of children could mean a great future, but it also heralds serious climatic and environmental challenges. 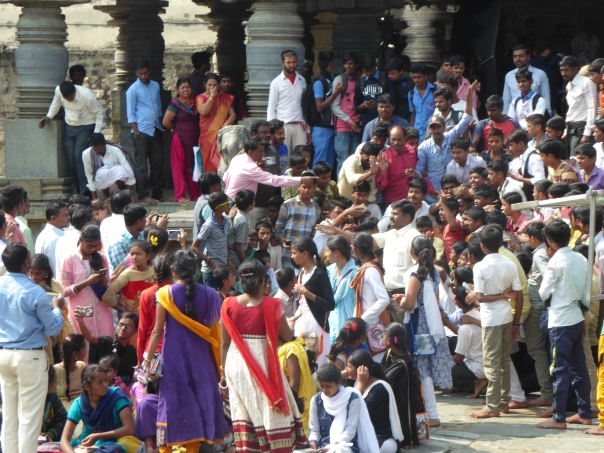 Lastly, it is a country with vast economic and environmental challenges, with the latter perhaps worrying us most during our stay. There is far less obvious and abject poverty, even along railway tracks, than when we were last here, but it is a country of vast inequality – but then that is the same the world over. But economic progress has come at a heavy cost to the environment. To give just one example, air pollution is a very serious challenge ,as well as eliminating waste, especially plastics. There are signs that the government is focused on these issues but there is a huge environmental mountain to climb.

Bernie: David has really summed up some of our thoughts about India. My lasting impressions of India will be the kindness, vibrancy, colour, noise and richness of wildlife and culture. So we end the first part of our cycling trip in India with great memories. We hope you have enjoyed this blog.   Many thanks to those who have donated to our chosen charity Walk for Life. If you have note yet donated but have enjoyed reading the blog then please consider doing so -there is a “Donate” button on the task bar.

Signing off now for the 2018 tour – hope to resume next year (or possibly earlier).