(Bernie) Our level on the cycling madness scale probably escalated today with our decision to cycle out of Bangkok. We had considered other options, like getting a train to the outskirts, but we have always found that loading the bikes and panniers on to trains or buses is even more anxiety provoking than braving the traffic, so we opted for an early start. Armed with a street map of Bangkok we just decided to go for it.
So we found ourselves breakfasting in the dark at 6 and setting off at first light, at around 6.30. Our bike boxes were safely stowed at the hotel with a booking to return before our flight at the end of February. A young doorman seemed to take personal responsibility for looking after them for us and gave us a cheery farewell.

The doomsayers who predicted death and destruction to anyone who cycled in Bangkok had probably never been on a bicycle. True there was a fair amount of traffic even at that time of the morning, but we found the Thai drivers to be incredibly courteous. Even as the traffic built up and we were often in narrow lanes, the cars and vans hung back until they could overtake us safely. We got cheery thumbs up from traffic policeman and just about struggled with the pollution. There was no hooting or tooting as that would be seen as far too disrespectful for the average Thai person….such a contrast to India. 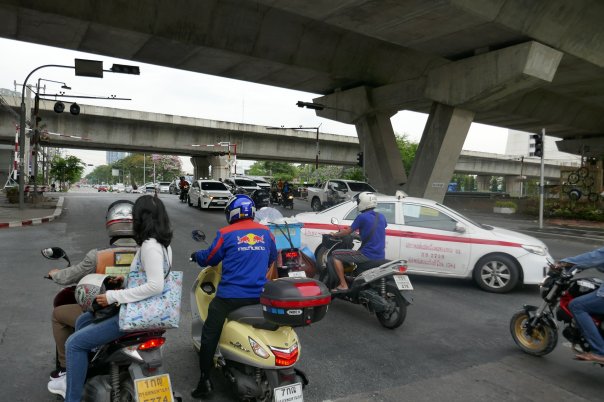 Altogether it was probably easier than cycling in London and compared to Istanbul or Mumbai it was a walk in the park!! Having said that – it was city cycling so the pollution was pretty horrible and our concentration was super-charged, especially for David as he was navigating as well (I just pedalled along behind!). About 20km in, as we got to the edge of the Greater Bangkok map, we stopped for a cup of coffee feeling mighty relieved.

Soon after got going again we reached one of those navigating conundrums where the left turn we wanted to take turned out to be an elevated expressway high above us! As we paused to consider our options (or seemingly lack of options) a friendly man on a motor cycle came up and asked where we wanted to go. ‘Follow me – short cut’ he said as he turned back the way he had come to direct us. Along a track by the railway, down a back alley and over a footbridge of a large canal and we were exactly where we wanted to be! It reminded me why I so love our cycling trips as so often we meet small acts of kindness that renew one’s faith that most people in the world are good people. 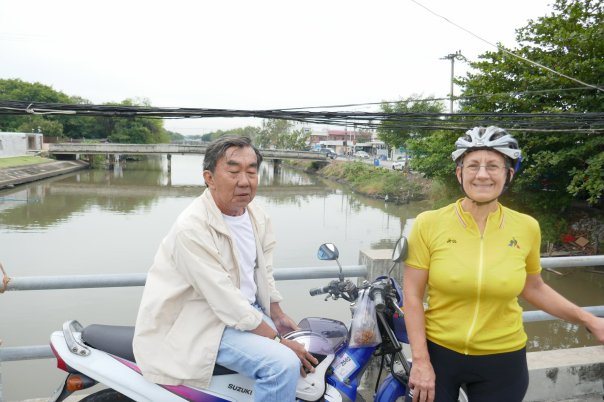 The next section was a long straight road along a canal. We were definitely out in the countryside now with banana trees and paddy fields. Small canal side shacks were interspersed with the occasional amazingly ornate Buddhist temple. Flat was good for getting our legs going for our first cycling day. Inevitably not as fit as we would have liked after uninviting December weather and a busy Christmas. Unfortunately the bain of flat lands is wind and inevitably it was against us!

t 11.30am we were tiring….but then realised we had been cycling for 5 hours (getting out of Bangkok was certainly slow). We stopped at a roadside eatery that was full of people and had delicious fried chicken wings in a sesame batter, rice and 2 bowls of a steaming veg soup each. We of course we clueless how it all work as people piled up their plates but an older woman who seemed to be supervising the cooking took us under her wing and in spite of not a single common word between us other than ‘fried chicken’ she made herself understood! We must try and brush up our Thai! The meal cost us about $2.50, so was more than worth it.

Renewed we had 25km to go. Our legs were beginning to suffer but knew we had to go through these first few days of physical endurance to build up some fitness. We were relieved to roll into Ayuttaya, the old capital of Thailand, around 2pm. Even though we found we were not booked into the guest house we thought we were (that sinking feeling when they said they did not have our reservation) it turned out we had booked into the sister guesthouse down the road and we were soon in our simple but spacious room glorying in a hot shower.

lthough we were feeling pretty exhausted, we forced ourselves out to do some sightseeing. After all we had cycled all the way here to see the temples that had been the glory of the old Thai capital until it was ransacked by the Burmese in about the 1750s. Seeing the Grand Palace in Bangkok the previous day gave us a good clue at how the place must have looked in its heyday. The core of the old city was in a big loop of a series of rivers and so was, in effect, an island. The river island had been home to no less than 6 temple complexes.

We weren’t up to looking at all 6 but strolled round 2 of them. Although now ruins, the place was peaceful and evocative with leaning stupa’s and crumbling Prangs (Pagodas) with occasional glimpses of the carvings than must had adorned the whole place and one or two fully preserved Buddha’s with their enigmatic faces. We walked off the aching in our legs and really enjoyed it.

A day that started feeling anxious turned out to be a great start to the trip.