Today we crossed into Cambodia, met a lovely Dutch couple who were also travelling by bike and managed to fuse a hotel’s electricity system – all in 24 hours. 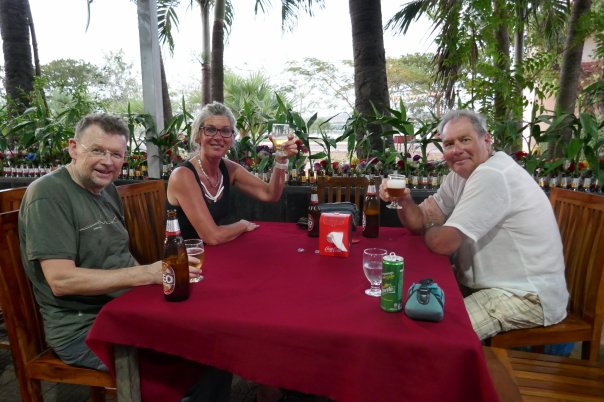 We started early and were on road by 7.15am. I have now found the temperature setting on the Garmin so know it was 21C when we started (and climbed to be well into the 40s by the early afternoon). We plodded along for 30km, had some coffee and then braced ourselves for crossing the border. We had read all manner of horror stories – mostly involving the need to pay copious bribes – but actually it was efficient, we were charged $35 for the visa (which is either the right amount or only $5 over) and then crossed into Cambodia.
Cambodia is poorer than Thailand but the people are more engaging with visitors, especially those on bikes. 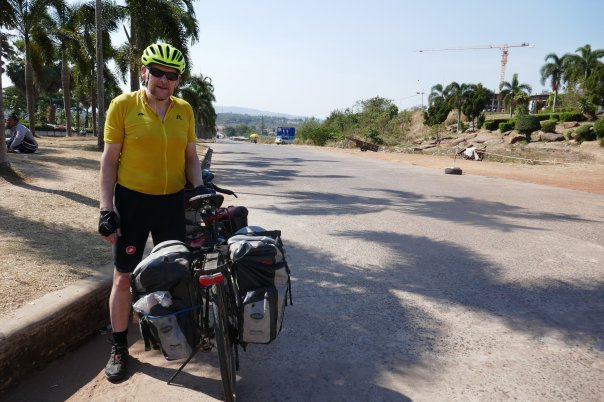 We got numerous waves, smiles and “hellos” from children (who we think are partially taught in English). The road surfaces was good and we dropped 100m over the first 7km – so it was a fast start to a new country. First impressions are that this is young country, with loads of children. It is dusty, developing at a great pace and has an enthusiasm that is perhaps missing in Thailand.

However 20km from the border we were feeing very hot, and needed a rest. So we stopped at a bus shelter and drank water and ate doughnuts – bought from “Tescos” or 7-11” in Thailand the day before. We carried on through this agricultural but arid scenery and stopped to take some photos. 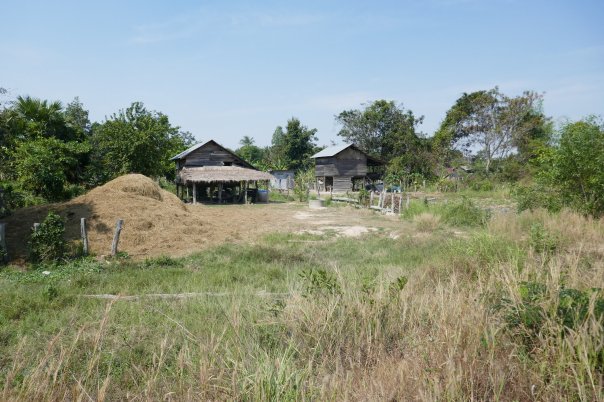 Then, to our utter astonishment, we saw 2 other cyclists coming towards us. Wilma and Will are a Dutch couple of about our age who are on a 5 week cycling tour of Thailand, Cambodia and Laos. They stormed up to us and were as amazed by meeting us as we were meeting them! We were both going the same way so we teamed up and chatted as we rode. The flat countryside whizzed by and we soon reached Samroung, the town where we all had marked as the end of the day’s cycle. 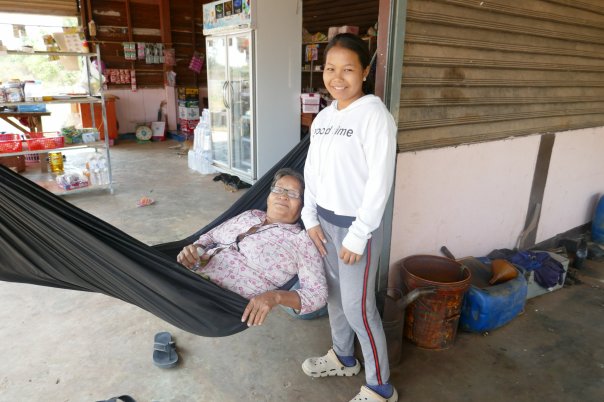 It was astonishing to hear them putting forward exactly the same reasons as us for embarking on this madcap adventure. They spoke of the peace, the quiet, meeting people and seeing a country at a slow pace – all things we have tried to explain in our own words. So we are either both mad or we are onto something.

We found a hotel by the lake and then showered. A new country means a new Sim card – but at $1 it was not going to break the bank. I then spent several hours reading up on Cambodia’s past, including the Khymer Rouge period when millions died. It was more complex than I had recalled (as is always the case) but there are very few people our age since our generation lived (and died) in the terror,
We then had a pleasant meal out with Wilma and Will and learned that they tried to cycle every day in Holland, despite the winds. They were certainly faster than us and this may explain it. As we walked back music was booming across the lake and we were treated to a firework display that reflected in the lake waters – not to welcome us to Cambodia we think but probably a wedding celebration.

Then back to the hotel with its amusing signs. However the act of turning on the bedroom light fused the hotel’s system, resulted in young boys spending a long time fiddling with live electricity wires. I could not bear to watch but, having failed to mend them, we were moved to a room with functioning lights!