Today was a holiday day – a day (almost) off the bikes and trying to be proper tourists in a tourist city. We started by trying to visit the Royal Palace when it opened at 7.30am but spent 15 minutes walking around a collection of impressive buildings wondering why there was no ticket office, no other tourists and lots of monks around. The reason was that we had wandered into Wat Ounalom, the centre of Cambodian Buddhism, not the Royal Palace. Feeling like total chumps we ambled along the waterfront to a set of buildings that any idiot could see were much more likely to be a Royal Palace. 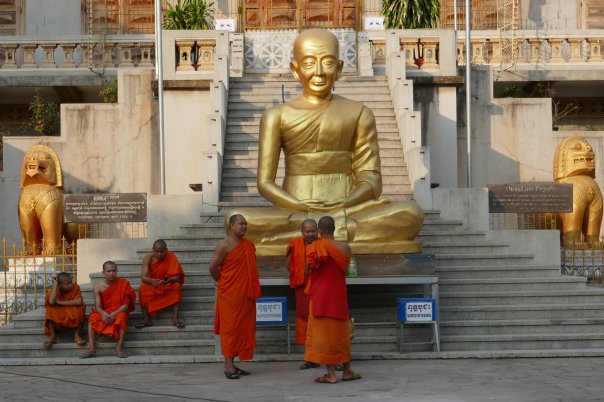 The pictures tell the story of the buildings, but the history of the monarchy is more interesting. The monarchy was dissolved under the Khmer Rouge but restored in 1993 following the collapse of the Soviet Union and hence the reduction in Vietnamese influence in the country, leading to an agreement in Paris. The previous king was reinstated and reigned as a constitutional monarch (but with real political influence) until abdicating due to ill-health in 2012. The present king, his son, lives mainly in France (at least according to Wikipedia).

Cambodia has a semi-functioning democracy is listed as one of the most corrupt countries in the world on Transparency International’s List – coming in at no 154 out of 187 – equal with the DRC and below Zimbabwe. There are political posters everywhere in the country which are still up from the August 2018 elections, but that election saw the incumbent Cambodian People’s Party win 125 out of 125 seats in the National Assembly. That result was assisted by the arrest of the main opposition party leader on treason charges and the dissolution of the main opposition party by the courts. Hence this is a country with major governance challenges that is not, in reality, following a multi-party democratic model despite the constitution.

All that seemed fairly remote to our minds as we ambled around the Royal Palace (having finally found it) slightly ahead of the major tour groups.

After that we spent the day planning, I did a little work and we then set out to find out if Vietnam would be kind enough to grant us visas. Yes – we got visas! It was all very efficient. We then set out to explore the “Russian Market” which is an astonishing complex of stalls in a building where you could buy nearly everything. We parked out bike at the “motor parts” entrance and passed numerous stalls selling an astonishing array of motor bike bits. The equation between time and money here means that nothing goes to waste. Bikes that die a death get broken up into minute parts and get recycled, sold and reused.

Eventually we found the shopping parts that we came for. No clues because some reading this might just be beneficiaries. Then we braced the traffic to cycle to the bus depot to get tickets for the Saigon bus. Traffic in Phnom Penh has its own set of bizarre rules but it all sort of works. Hold your nerve, cycle with the traffic flow and it will all be fine!

Getting bus tickets for us and the bikes was remarkably easy, and so we felt we had achieved our goals. Back to the hotel to relax, read and then amble out for a meal. Walking around teh centrre of the city, it becomes obvious that there is a rather unpleasant and visible sex tourism presence in Phnom Penh – with a significant number of western middle aged men (or older) coupled with younger Cambodian women (some very young). The economic drivers for this trade are obvious and it is pretty open. But these appear to be a minority of tourists. There are many “gap year” young travellers and large numbers of middle aged and older culture tourists (who I suppose we are part of). But the sex trade is a loud and visible part of the economy here, just as it was in Bangkok.

Earlier in the day we spent an hour at a cafe which was run by a charity that rescued women who had been trafficked, often from Vietnam and retrained them to work in a less exploitative part of the hospitality industry – namely in the cafe. This is a side of Cambodia that sadly thrives in an environment of corruption and poor governance. The government does appear to be committed to improving the situation but building the culture to prevent this has been a major challenge in the West (and one where frankly we still have a long way to go). Doing the same effectively in a country like Cambodia must be even more of a challenge.