This was a day of getting over jetlag, acclimatising to the heat and humidity and getting the last few bits to prepare for the start of the cycling ahead.

First, acclimatisation. It is mid 30s degrees C here – well into the 90s for those still working in old money. That is a tad warmer than England, and there is less driving rain and storms (at least as yet). And it is quite humid. So it takes a bit of getting used to, to say the least. When we were in our late 20s we cycled across the Baha desert in temperatures of well over 40 – but that was over 30 years ago and I qualify for a seniors rail card in a few months! So getting used to the conditions will take some time. We started today and sweated a bit (or a bit more than a bit) as we cycled across parts of the city. But we will have to start slowly (or early – or both) tomorrow.

Then preparation. There was a few things to buy here – like food. With the bikes, we were right up against the 60kg weight limit on the plane so a few kgs of porridge, etc would have taken us over. There is a chain of 7-11s and Tescos in Thailand, so we could stock up a bit. Mostly we will eat street food as we go along – trying to remember to follow Ant’s sage words that we should eat and drink every hour or so (but normally forgetting of course).

But before we did anything sensible, we were tourists for a morning, looking around the wonderful Wat Arun Ratchawararam Ratchawaramahawihan, commonly known as the Wat Arun. It is also known as the “Temple of Dawn”. We were there early at this Buddhist temple, but not quite at dawn.

It is on the Thonburi west bank of the Chao Phraya River. The temple derives its name from the Hindu god Aruna, often personified as the radiations of the rising sun which is a delightful mixing of religions. Even when we went, well after dawn, the light reflects off the surface of the temple with pearly iridescence. Although the temple had existed since at least the seventeenth century, its distinctive prang (spires) were built in the early nineteenth century during the reign of King Rama II. There is an extensive complex of temples with monks in attendance adjacent to the formal temple, and we sat and watched as a devout couple made offerings and then received chanted blessings and sprays of holy water in exchange. Every religion has its rituals, and they usually involve the devoted giving money to the professionals. It was both charming and familiar as an exchange.

We have noticed a real absence of tourists in Bangkok so far. The Wat is a major tourist draw but there were relatively few other visitors. The restaurants are not full and we are the only guests in our hotel (as far as we can see). I am not sure if this is westerners not travelling due to the climate crisis, fears of Coronovirus (and there are no hoards of Chinese tourists like last year) or just the end of the season. No doubt we will find out as we go south. 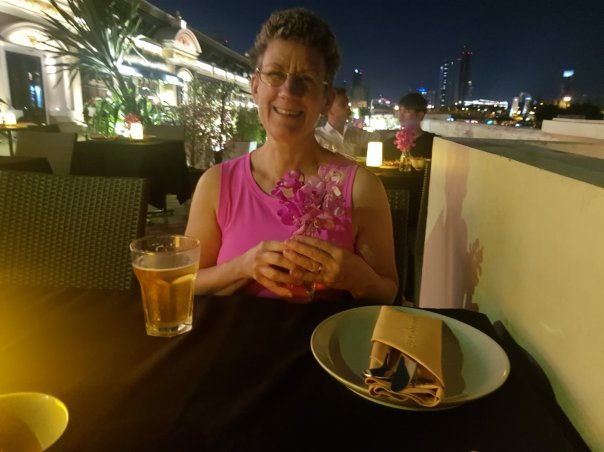 ater we also found a bike shop so we could pump the tyres up to full pressure of 70 psi – only really possible with a foot pump. I have only ever seen one person touring with a foot pump – the wonderful Wil and Wilma from Amsterdam, who are on the way to Vientiane in Laos as I type this. Their plan is to cycle Southwards along the Mekong in the direction of Pakxe – see a comment on the blog yesterday. We wish them well on their travels – complete with foot pump. 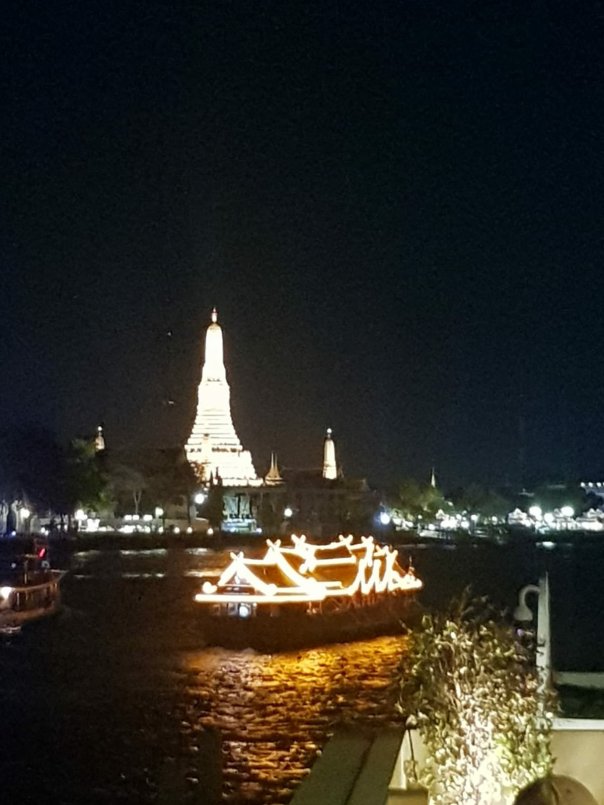 We also struggled across town to find a mobile phone shop, to get a Thai Sim card for our travels. It was in a shopping centre that was just like Bluewater or the new Bull ring. The only difference was that everyone at this centre appeared to be immaculately turned out (other than us of course).

After cycling back to the hotel and realising that my headset was loose, it was time for a bit of bike maintenance. I managed it without phoning Malcolm Garner or Mark Young so either (a) it was easy or (b) I did it wrong. Time will tell.

We finished the day with a lovely evening amble on the bikes into the tourist bit of town and a fantastic Thai meal on a rooftop restaurant overlooking the river. The tour boats ply their trade up and down the river – with cargos of passengers from the massive cruise liners that dock in the bay. So all that some of these passengers see of the wonderful old town is a view from a river boat – entertained by a band and someone singing out cover numbers. We get the smells, the chaos and the smiles on our bikes. It is a privilege to be on 2 wheels and self-propelled.

Let’s see what tomorrow has to offer.

2 thoughts on “Tuesday  3 March:  An acclimatising and preparing day in Bangkok.”