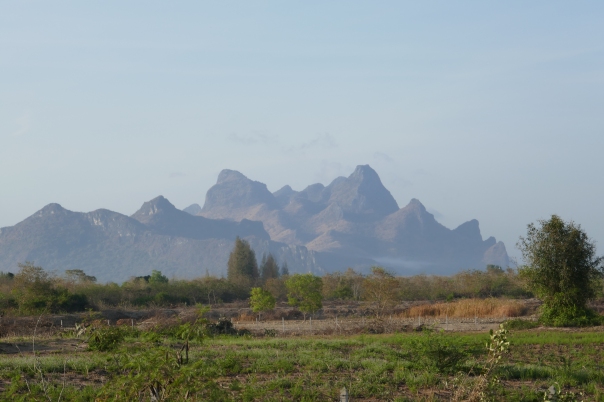 Today ended with a 2km moonlit walk, hand in hand, along a stunningly beautiful and totally deserted beach. It may get better – but it is hard to see how. We were walking back from the General Store where we had bought food for supper after an exhausting day’s cycling, walking and sightseeing. As I type this, Bernie is cooking outside our room in the otherwise deserted “Pink Power Beach” complex of tiny huts – we have no idea what normally goes on here because it is not on any website, and we are the only guests – but at £15 a night who could complain.

We started at 6am, just as the light was emerging. Alarm at 5.15am and then pack up, breakfast (porridge with bananas and oranges and coffee). The routine is coming back to us and we were on the road in under an hour. The cool of the morning is a lovely time to cycle – and when the government puts on a cycle lane it gets even better. It lasted about 10km off the side of the main A4 road and was well used by Thai cyclists. If you want to do a quick 30km for your health, 6am is the time to do it.

The scenery was (as we went south) flat scrubland leading down to the beach to the East and increasing outcrops of rocks to the West, rising up like dollops of ice cream on a flat pancake.

After 35km we got to the entrance to Khao Sam Roi Yot National Park, and then went down to a little cove known as Wat Bang Pu, which gives access to the Tham Phraya Nakhon caves. Memories of the fictional Marabar Caves in EM Forster’s Passage to India came to mind as we walked up the cliff walk. We were too mean to pay £10 each for the boat ride to avoid the cliff walk and, in any event, the views were spectacular. 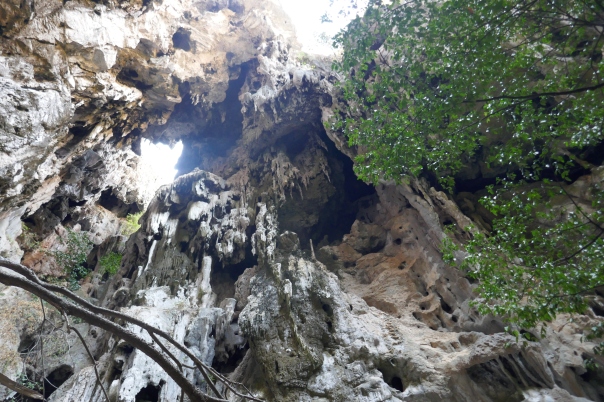 The climb up to the caves was steep – and took a good half an hour or more – even in the relative cool of 9.30am. Loads of seriously unfit people were struggling to walk up the shiny stone steps – rubbed clean by countless feet over the centuries. When we finally got there, the caves were well worth the effort – although they are not “caves” in the traditional sense but massive rock caverns with massive stalactites and stalagmites, but largely in the open air as part of the rock ceilings had collapsed in both caves.

There was a Buddhist shrine in the far-most cave – and we arrived just as the sun caught the roof. The pictures do not do credit to this magical place but we hope they convey some of the wonder.

We ambled back to the cove and debated what to do. By this time it was noon and very hot – maybe 37 degrees C – and the sharp southerly wind we battled against yesterday had returned. We had a potential warmshowers stop about 60km south but, after 45km and 3 hours walking, Bernie was unsure if we would make it. We had some food, and then read and set off about 2pm to see how far we got and, after a few hundred yards, met up with a lovely, young Aussie couple who were cycle touring from Singapore northwards, and aim to be in Europe in about 2 years time. They were well equipped – Brooks saddles and Ortlieb panniers – and we chatted about the routes we both had taken and hoped to take. If they are reading this – please give us your contact details and we’ll host you in England.

The heat was still intense and the wind was sapping. We managed 80km and stopped at a beachside village that does not merit any reference in the Guidebooks, Kui Buri. There are several major hotels here ($100 per night plus and some lots more), but we passed the Pink Power Beach complex (it was definitely very pink) and tried our luck – and our luck was in. We gesticulated in our best Thai, miming sleeping, and a room was opened up. Sort of AC, no problems brewing up and otherwise empty.

There was a wedding going on across the street with loud ‘muzac’ but it stopped when dusk fell – then the monks started amplified chanting – but that lasted less time and was a far more congenial and calming end to the day.