This is written by David.  With my back muscles still objecting to any form of exercise we took a day off in Hood River.  It turned out to be a US-style version of Bewdley and hence an excellent place to while away a little time.  There is a river (the Columbia) which is a bit bigger than the Severn.  Well massively bigger in fact.  Water sports – here windsurfing and sailing on the river – and we have rowing at home.  Forests – the town is surrounded by forests just as in Bewdley.  Hills – well we have then in Bewdey but not as big as the mountains that surround Hood River, and in particular the wonderful Mount Hood.  And it had cool restaurants – maybe not as cool as the Vhujon but Hood River cannot have everything after all.
The sun came out, in contrast to the last few days and so we ambled into town and had coffee at the Doppio Coffee Shop (almost as good as Piccolos but with a tad more sunshine).  We still had the problem as to how to transfer photos to the iPad but none of the local shops appeared to be able to assist.  Windy River Computers came closest but their solution did not work.  But he did upload the photos to a server and so we could download them to the blogsite, so some progress.

We ambled down to the waterfront where a windsurfing competition was all set up.  The kit these days is far more sophisticated than when I did this sport, and there was large amounts of testosterone on show as the competitors waited to start the races.  Serious hours in the gym were on display – and that was not just the men!  I asked when the races would start and got the answer “when the wind blows”.  Feeling about 3 years old and asking obvious questions (but allowed to because of being foreign) they said “well if it is going to happen it will be in the next few hours”.  In the end the wind did not “blow” that day.
This was the same wind that had driven us along the valley the day before and thus reduced our time on the horrid interstate but this was Saturday and the wind was having a day off.  We never knew what happend but it loooked as if everyone had to pack up and come back the following day in the hope of better weather.  Memories of sitting on the hill “para-waiting” came to mind as paragliders waited for the right wind to fly, chewing the cud and putting the world to rights. 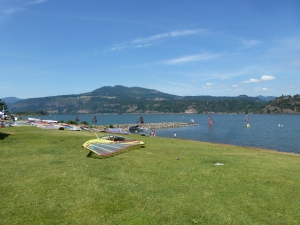 We cycled back to the hotel, rested up (R & R for the back) and then ambled out in the early evening.  Hood River is the centre of the wine trade in this region, so we went to the “Naked Winery” for a tasting.  This consisted of 8 samples of their wines all with erotic names.  Unfortunately the marketing was better than the product, and despite all the promotion, the wines were largely disappointing.  We were offered a taste of a “members’ bottle” which was a distinct improvement but then it ought to have been at $80 a bottle.  So we paid our $8 each, declined the chance to become a member (which I assume is why the tasting is just $8) and moved on.
The Oregonians are also serious about their beer, with a number of local breweries.  These run pubs which also serve pizza and loud music.  The weather was good enough to sit outside and we sampled the beer – very good indeed – the pizza – equally good but too large to finish (not problem becasue we took the rest away for lunch tomorrow) and talked to a charming and fascinating woman who had just moved down from Alaska to be a school principal in Portland.  Her tales of life in Alaska were eye-opening.   All life and more seems to exist there, and they certainly make the most of their short but hot summers.  It was another encounter which was hugely enjoyable (and I hope you are reading this – sorry did not catch your name).
When meeting people on a bike tour we tend to find ourselves having much of the same conversations, over and over again “where are you going, where have you come from, why not cycle on the coast where there are less hills…”.  This is inevitable but we have become adept at moving the conversation quickly on to the other person, and then are able to bathe in the joy of discovery.  The United States is not short of “characters” in the good sense of that word, and we have many of them on this trip.
Full of wine, beer and pizza we cycled back to the motel to pack and get ready to hit the road again in the morning.