Bernie: We woke to a fresh bright morning and had a fairly leisurely pack up. We were continuing to cycle the route but Tom and Carolyn were going to go straight up to Crater Lake and we hoped to meet at the camp ground the next day. We had considered the ‘Windego Pass Alternate’ which is a 30 mile route over the mountain on a dirt road but 3 things mitigated against this 1) I didn’t like the small section of dirt road near Sisters, 2) the 3 web postings I looked at all said it was awful and don’t do it 3) the forecast was bad with likely rain and thunderstorms. Sense prevailed and we took the ‘main’ route, which we knew would be a fairly tedious day ‘dog-legging’ down to the main highway 97, 15 miles along then climb back into the mountains.
The first section was ok but boring. The section on the 97 predictably busy and took us to our least favorite place to date – Chemult. This dusty drive through town of a couple of gas stations, cafes and motels was dreary but the only town on route. Breakfast was equally dreary with the owner warning us against going up to Diamond Lake because of the forecast of storms and snow, although he looked as if he had never been to Diamond Lake in his life.

There was a small motel at the turn off the 97 and I spent the 10 miles wondering whether we should be sensible and stay there.  Not helped by a puncture 2 miles from the turn off that we had to repair by the dusty main road. The motel at the junction looked equally dusty and dismal and we could not face staying there so decided to press on.
The next section of road was dead straight for 15 miles and climbed 1500ft. It was odd to be able to see so far ahead but we climbed well and reached the junction to turn to crater lake or diamond lake. It was 3pm and the weather definitely clouding up so decided to stick to plan A and turn down to Diamond Lake, even though it was 5 miles down hill off our route (and therefore up hill tomorrow). 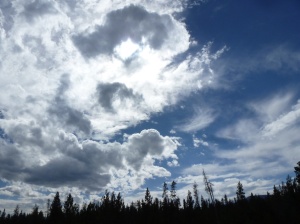 We were still worried about the weather reports and how our little tent would stand up to storms and snow at 5500ft, so although the campground next to the lake looked lovely we pressed on another couple of miles to the Diamond Lake Lodge. We had rung in the morning and were told they were fully booked up but thought we would check to see if there were any cancellations. We walked into reception where there was a huge log fire burning. It was going to be hard to turn back to the campground as it had just started raining.

The first response was ‘no rooms’ but on checking, the gods were with us and the receptionist did find one room free. It was a basic motel type room with thin wooden walls but it was large and warm with boiling bhot showers and the setting was glorious The lake, even in the cloudy evening, was beautiful and the Lodge restaurant had fantastice picture windows looking out onto the lake. We had a pleasant meal chatting to a chap next to us who had recenlty moved from Portland to Bend (cannot remember his name) and although the threatened storms and snow did not materialise, it did rain and we were very pleased to be in our cosy room.