72 miles; 2700 feet of climbing.  David: We woke in a bed – such a delight – and gradually got going. The first 20 miles or so was up and down through a lovely forest, and then a long downhill towards Chester (3 miles off the route but worth it). This town of Chester is on the shore of lake Alamanor, which is a huge man made lake which we could see from the climb up to Mount Lassen. We found a happy coffee shop and had muffins, and then Bodfish Cycles which was run by someone who knew all about touring and was happy to chat for ages. No other customers appeared but he was great to talk to. He sold Bernie a padded seat cover which seemed to do the trick and hence may be (we hope) the last reference in this blog to her hurting posterior! 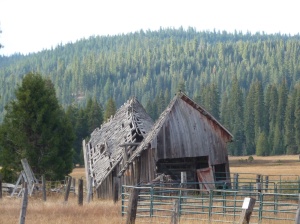 Our route took us around the west side of the lake, first on the road and then for about 12 miles along a meandering bike path that was almost obscured by millions of pine needles. The path wandered around the lake shore, inland for a bit and then back to the lake. It was great to be off the road. The sun was out and at one point we were able to look up to see Mount Lassen, where we had cycled yesterday. 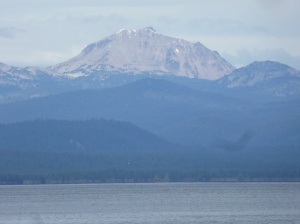 After the end of the lake we were back on highway 89 and dropped down to Greenville for lunch. I had a flat tyre and changed it for one I mended earlier (in true Blue Peter fashion). It seemed to hold up and then we cycled down the delightful Indian Creek. This was an expected joy – a narrow gorge going downhill for about 12 miles with steep sides and a tumbling river. The road was quiet (as it was a Saturday) and the rain threatened but held off. 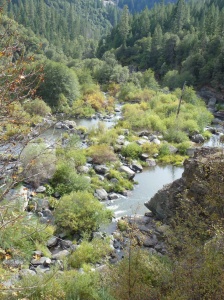 Cyclists know that they have to “pay” for every descent. There is no such thing as a free lunch or a decent with climbing before or afterwards. In this case it was afterwards. By the bottom we had cycled 60+ miles but knew that we had to do some serious climbing to finish the day. The route followed the Spanish Gorge (down an Indian and up a Spaniard seemed to sum up the day) and was tough climbing in the afternoon heat. We dropped to 3000 feet and so the sum was warm, flies were around for the first time in days and the road was steep. Up we plodded and then, as if to spite us, the road dropped off again meaning we had lost almost all of the gained height. It did that twice but, just before we got really frustrated, we met Gary as he cycled beside us. 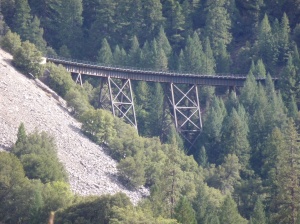 The usual “where are you from/going to/ending up conversation quickly turned to “where are you going to stay?”. Gary was hugely hospitable and offered us the chance to camp in his garden (yard). He then cooked us chicken for supper and, astonishingly, then decided to leave for the evening to drive with his 14 year old son for a bike race in Reno tomorrow. So we have the run of his house and just have to look after the cats.
The level of hospitality has left us stunned. We have so much to learn about trusting people and being open. So I suspect we will sleep on his floor (it might be freezing tonight and then head off to Truckee tomorrow (long day ahead but another warmshowers host awaits us.