David: Day 3 of the shutdown of the US government saw us wake after a good night’s sleep in the motel in little town of Walker (at about 5400 feet and so not too cold). We did not rush to leave because we knew we had a reasonably gentle day ahead (or at least gentle compared to what we normally put our bodies through in the name of fun and adventure). 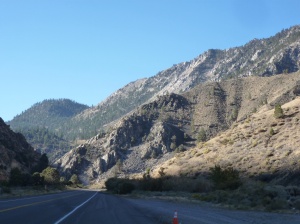 The first part of the ride was up our old friend, route 395. The road climbed, following the gorge created over millennia by the West Walker River. It was easy climbing, the road was not too steep and we had a tailwind. We reached Sonora Junction and then the road turned so we did a stretch into the wind – ouch! It was tough to climb and oppose the wind, but the scenery was delightful – arid, rocky and with a real feeling of remoteness. 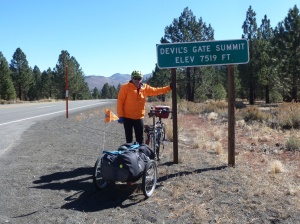 The road turned again and we had the wind at our backs as we reached the Devil’s Gate Pass (7519 feet) after an hour, meaning we had climbed 2000 feet from Walker. Then a lovely downhill for about half a mile and yet, as the road turned into the valley, the wind changed direction and hit us in the face. It was OK going down but then we hit the floor of the valley and the road turned directly into a roaring gale. Head down, low gear and pushing for 3 miles saw us cross the valley floor to reach Bridgeport (4 miles).
This is a lovely little town sitting in a wide valley at 5400 feet. It gets serious snow in the winter but, at this point with a howling gale running through the clapboard buildings, had a “Wild West” feel. It also had the fine Bridgeport Hotel, which dates from 1870, which is not long after the settlers reached these parts. Inside the hotel was smart, bordering on the gentile, and proud (and rightly proud) of its heritage. It also did an A1 grade chilli which hit the spot.

The waitress naturally inquired about what we were doing and why. The what was easier to explain than the why because it was clear she thought, in the nicest possible way, that we were out of our tiny minds. Wild horses would not persuade her to get on a bicycle in this wind to cycle up the next hill to Conway Summit. Still she was amused by our exploits and said it gave us “bragging rights” which was some consolation for our loss of sanity I suppose. 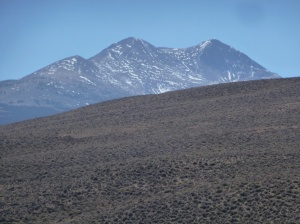 Despite the local predictions, the road up to Conway Summit (8143 ft) was a delightful 13 mile ride up a valley road. The panorama changed as we climbed. We picked a time to travel this road when the autumn colours on the trees were at their very best, glinting yellows and gold colors in the afternoon sun and topped off by a peak that was showing the first dusting of snow for the season. 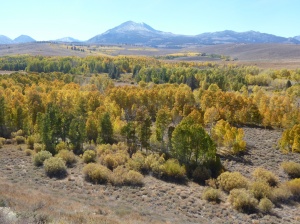 Something a little bit different happened after the road started to descend. There was a new surface but one lane of the road was closed off to traffic. It was closed for resurfacing but the resurfacing had finished and there were just miles of cones confining vehicles to a single lane. John Major would be rubbing his hands with glee becasue his “Cones Hotline” would finally have been justified. I suspected that all that was left on this job was for the workman to do was to remove the cones, and to be fair we saw them doing that on the other side.
But for us it was brilliant: we had our very own coned off lane to descend at whatever speed we liked and all the traffic (not that there was that much) was in the other lane. So we zoomed down on fresh tarmac at high speed. We only stopped to take pictures of Mono Lake in the same spot that we took pictures 22 years previously. But there was a change – because the lake was now a lake. 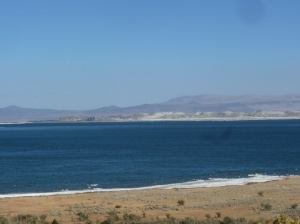 In 1991 the demands made by Los Angeles for water had drained the lake to a small puddle in the middle and there was a major fight between the industrialists and the conservationists as to whether the lake could be restored or not. Well this was one battle the conservationists won and the lake is back to almost full capacity. There was a visitor centre which,no doubt, explained how this considerable environmental feat was achieved but it was a federal building and so was regrettably closed.
After a short climb from Mono Lake we reached Lee Vining. we had booked a motel here because we have a mega early start for a mega day tomorrow (over Tioga Pass at just shy of 10,000 feet and then right the way through Yosemite which is totally closed due to the government shutdown).