David: Today was an epic and one of the highlights of the whole trip, despite the efforts of a group of Tea Party Congressmen and Congresswomen to spoil it. We reached the highest point of the whole route (9945 feet) and cycled our longest day yet. The scenery was spectacular throughout the day and, as I type this, I can genuinely say we felt we had pushed the limits.

The alarm went at 6 and we were on the road in the half light before 7. We said our goodbyes to Mono Lake just as dawn broke, and headed off highway 395 and onto Tioga Road. We started at 6800 feet and had to climb to just shy of 10,000 to reach Tioga Pass, a climb of 3200 feet (since it was all up and there were none of the annoying up and down sections where we loose the height we have sweated to gain).

It was a tad cold to begin with. My Garmin is now set to show temperature so I can confirm it was 22 degrees F – that is about -4C in real money. It explained why our feet felt like blocks of ice and the spouts to our water bottles froze. As we climbed the road went in and out of the shade, and there seemed to be a massive temperature difference between the two.

It was steep in parts and yet was not too bad because the steep sections were not oppressively steep (unlike Monitor Pass). The climb brought back so many memories of 22 years before, and the mountains gradually changed shape as we ascended.

At about 10am we reached Tioga Pass, and felt really good about it (even if still a tad chilly). The Federal Government remains closed and so Yosemite Park remains “closed”. There were rangers at the entrance (at the pass) who helpfully explained we did not need to pay $10 each but were strictly told not to leave the road. In fact cars were told not to stop at all – somewhat unrealistic given that this was amongst the most photogenic roads on the planet. Bernie pointed out that asking us to cycle 60 miles without stopping was not sensible – and the ranger scratched her head and admitted they had no special rules for cyclists. The sanction for anyone who broke these rules was entirely unclear, but it seemed to be that the Rangers would not “be responsible” for anyone who strayed off the road and so – in the absence of a responsibility that we did not ask for in the first place – we were banned from leaving the road.

We wrapped up warmly for the descent and duly promised to stick to the rules. The way down was fairly steep to begin with, and we saw astonishingly large rock formations on the way. This is a climber’s paradise with huge granite cliff faces around nearly every corner.

The road was busier than we expected but most traffic was taking it slowly and passed us with a good margin. A few cars encouraged us into the non-existent shoulder but most were OK. After about 10 miles we reached the delightful Tuolumne Meadows, where cars stopped to take photos and we did likewise. All the buildings were closed, the car parks closed off and so cars stopped on the road side causing well meaning chaos.

We carried on to Tenaya Lake and – rebels that we were – broke the rules by walking off the road to a picnic table about 200 yards around the lakeshore. I started to brew up (discretely) and Bernie got our sandwich lunch ready. Then near disaster – we were spotted and a Ranger (with a gun – this is America) came over. I quickly extinguished the stove and we had a conversation along the lines of “you are not going any further are you”; “No officer of course not”; “Have you left your vehicle somewhere because there is no vehicle in the parking lot”; “No, we are on bicycles”. “Well the rules do not really apply to bicycles so I suppose you are OK”; “Thanks, can we finish our lunch and carry on – on the road of course”; “Yes, fine, sorry the park is closed”; “Don’t worry its not your fault, its down the nutters in Washington”; ” Yes I suppose it is”. And so he strolled off not mentioning the smell of petrol or the evidence of the brew (which we had a hunch may not have been quite permitted). We brewed up after he left (not out of rebellion but out of a need for coffee) and walked our bikes back to the road.
The next 20 miles were a series of ups and downs. At the end of the day the Garmin informed us we had climbed 5500 feet, but only 3200 of that was getting over the pass initially. All of the rest, namely 2,300 feet of climbing, was ups and downs (well ups really) after the pass. There were a series of climbs, descents and then new climbs, all with brilliant scenery as a backdrop.

However eventually we got the point where down meant down, and then followed the road downhill for about 35 miles. It went through forests that showed signs of the recent fires , precipitous valleys where the road clung to the edge with a thousand foot drop off to the side, through tunnels and with an ever changing landscape. 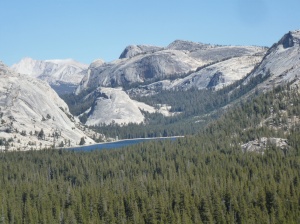 At one stage we stopped to take pictures and a group of young people (maybe aged around 25) stopped to chat. They were from Eugene, Oregon and were on a cycling holiday. They told us they tried to cycle 100 miles each day, but only achieved this on a couple of days. They had a van and took all their gear in the van. When they learned what we had done it was plain they were dead impressed. The actual words were “that is seriously legit” which we took as a compliment. They were really friendly and bemoaned the closure of the park, because they were heading the other way (over Tioga Pass) to try to find an open campground.

Bernie caught a glimpse of Half Dome on the way down – a 4000 feet wall of rock that climbers call Mecca. We also had great views of El Capitain and all the other famous climbing walls around the Yosemite Valley.
We pressed on and, at the junction of highway 41 and 140, we left the Sierra Cascades route. That is right – after weeks of slavishly following the route we abandoned it to find a campsite. This was at about 4,300 feet (so you can see we had already lost a vast amount of height down from 10,000). All we knew was that the campground was about 10 miles along the river valley and, as we guessed it flowed away from Yosemite, guessed it was downhill. We were right but far too right. The first campsite outside the park (and hence which was open) was 12 miles downhill at a height of 1600 feet. We sailed down the road with the thought “Oh no, we will have to reverse this tomorrow!!”
By the time we got to the campsite we had cycled 82 miles – a record for Bernie. We were 5500 feet lower than when we started and knew that tomorrow’s route took us back up to 6000 feet. All a good excuse to get a cabin rather than sleep in the tent.
Bernie:  This really was THE day.  We were both a bit nervous beforehand because we knew we had to get through the park in one go but once we had got up and over Tioga Pass in good time we were determined to enjoy the ride.  I am sure that we had the best deal of anyone in the park as our trip legitimately took hours – unlike the car journeys that may have taken hurried stops to take photos until the rangers moved them on.  There is a reason Yosemite is one of the most famous National Parks, because it is increadible. It may have been the mix of sunshine (another blue sky day all day) and lack of oxygen but I felt elated nearly all the way.