David:This could have been a day like any other, but of course each day is so different that there seems to be an infinite nnumber of “other days” to which this day could be the same.  But we got up, brewed coffee, took down the tent, had porridge and looked around for someone to pay for the campsite.  No takers and so we had no choice but to leave without paying.  If the campsite owner is reading this please contact us and we will mail the required $15  of course!!!
The hunters had woken about 4 in the morning and driven off in search of deer to shoot, and vaguely woke us when they did. Funny business this hunting business but the deer seem to thrive (until they are shot of course) and and so who are we to say that men and women should not spend their free time crawling through the woods as a leisuretime activity. They are certainly very friendly people when we meet them, and the deer get eaten so it seems to work for me.
We were straight into the climb because Camp Nelson was half way up the climb to the sequoia groves.  By the way, 2 facts about sequoias.  As well as being amazing and beautiful trees which grow to amazing  heights, their roots are only 6 feet deep and the word Sequoia is the ony word that has all the 5 vowels (feels that it cannot be true but cannot think of another word at the moment) . That must be a pub quiz question – one to file for future reference (but will still loose for dire knowlegde of soaps).

The uphill began outside the campsite and carried on for 2500 feet.  But it was cool in the morning air, the gradient was not that steep and the views developed as we climbed – so all was good. We reached the top but there was no sign to swing off in a silly photo, so we just pressed on to a promised cafe where we hoped to get breakfast. And it existed, and delivered. Great eggs and ham.
It was then mostly downhill with the occasional climb (in fact more than the occasional one) because these roads cannot make their minds up whether to go up or down. I (David) descend faster than Bernie because of the weight (body and load) and so tend not to pedal or I get even further away from Bernie. This leaves a chance for lactic acid to build up in my legs and means it is painful when I start pedalling again. Or at least that is my excuse and I am sticking to it. 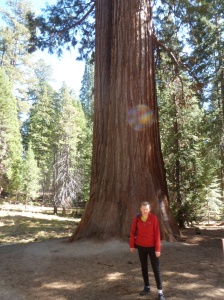 We got to the “Trail of 100 giants” which was a guided tour around a fantastic grove of massive sequoias. Stunning stuff which is best shown in the photos. But one tree is worth a mention. It had fallen over in about 1850 and was still virtually intact. The wood is so hard that it takes hundreds of years to decay. That means that it had been lying there in the forest for virtually the whole time that California had been settled. The Indians had been there for thousands of years of course but the tree toppled over at about the time that recent history began in this state, and was virtually unchanged. Astonishing.

After the sequoias we carried on going down and then reached the Kern River Canyon. Superb scenery but, at this point, we felt we had started to hit the arid lands. The sides of the hills were bare with only a few scrubby trees and very little vegetation. This was a land of little rain, at least at this time of year.
The canyon road had brilliant scenery at every turn and was gently downhill so we were soon in the delightful town of Kernville. There was a weekend parade of classic cars and lots of them were being driven up the road – mainly so we could coo at them of course. 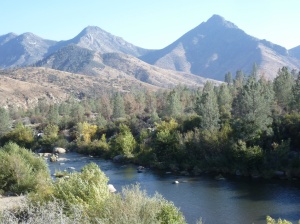 Bernie went shopping and I minded the bikes. A man and his on came up to chat – as they do. He was a cyclist and we had a “what’s it like to pull the trailer” conversation. For cyclists who spend serious dough to reduce their bike weight to a minimum I can see that pulling a trailer with a 40lb bag on the back is a slightly novel concept.
However we soon got on to what they had been doing (far more interesting to me of course) and they had been hunting. Yes, they had success – and had shot a big buck. I then got shown the buck in hte back of the truck, with the head duly severed for mounting. I made suitable congratulatory noises. He then said he had been hunting for many years and never shot one before. Makes me think the odds are with the deer on these trips!
We then ambled to a campsite by the river and set up camp. We were about to start cooking when the man in the next door camper said “I’m cooking ribs – got plenty so do you want to join us for supper”. That was virtually the first words we had said to him and were bowled over by his kindness. Of course we accepted. Bruce and Lisa were from Orange County and came up for the weekend to fish and see the classic cars. It was great to meet them and we had a fascinating hour as we swapped experiences. They thought it was perfectly normal to invite total strangers to share their meal – which of course it was. We were lucky to meet them and hope they will stay in touch.
Then to sleep – with the sounds of the tumbling Kern River in the background and the occasional party still going on (but we do go to bed early). A good day.