David: This was a day of 2 halves. The first part of the day was tackling the Yokohl Valley and the second half was climbing up to Camp Nelson. 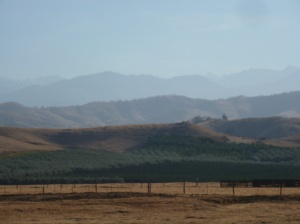 We began by cycling through more orange groves and then turned off the irrigated section onto a side road that took us up the Yokohl Valley (pronounced “Yokel”) which was not irrigated and was mainly cattle raising. It was remote country as soon as we left the main road and I half expected to see John Wayne on a horse and a big hat coming over the hill, followed by some unfriendly indians, but it was all peaceful. The road was hot and, at times, steep, and there was the inevitable tough climb at the end of the valley. All valleys have an end – almost always with a half circle of hills, and the road picks its way over the top. 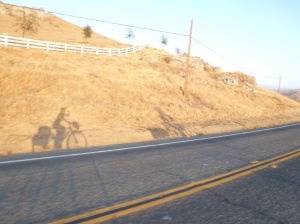 Bernie: Over the top and we were cruising down to Springville – although the road surface wasn’t too good. In the town there was actually a visitor information centre that was open in the Chamber of Commerce. The helpful lady there confirmed the Forest Service campgrounds in the Sequoia National Forest were closed, but the road was open and the private campground at Camp Nelson, our destination for the night, would be open. She even called it for us and when she was met by an answerphone said “OK Tina, where are you. I konw you are there so pick up…”.  Tina did not pick up (or even get paid for our stay – see later) but it gave us confidence to try the climb. 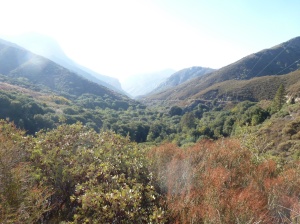 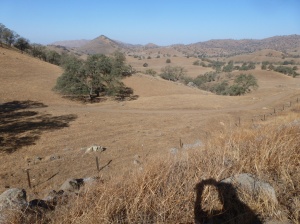 We knew we had a tough climb up to Camp Nelson so decided to have a decent lunch. We went to the “Cowgirl Kitchen” whose motto on the back of the staff T-shirts was “Cow girl cooking makes ya good lookin'”. It was great for us as we needed bulk but there was not a great deal of evidence to back up the slogan (and it was slightly undermined by the fact that the jolly waitress who sported this slogan looked rather like the “before” photo for a slimming ad). However we had a BIG lunch of burgers and fries (inevitably). I hadn’t quite appreciated how much we had descended to Springville and was rather daunted when we realised that in fact we had 4000ft to climb – our biggest climb in one go this trip – and it was 2pm and it was hot!  I suspect David knew perfectly well and kept quiet about it – he knows me too well. There was nothing for it but to set off. 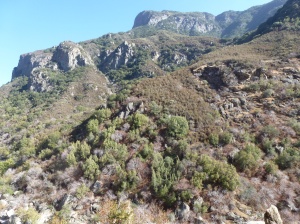 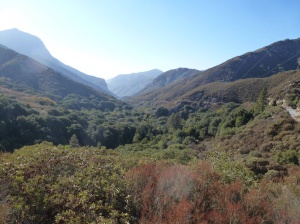 It was tough – probably our toughest climb to date. Not just the fact that the total climb was 4000ft but in parts it was very steep. But we are the fittest we have been on the trip and the valley we climbed was fantastic. Another of those days when there are not enough superlatives to go round. Running river, rocky outcrops, beautiful forest, autumn colours, blue sky etc etc.
We completed the climb in 3 and half hours and we very pleased with ourselves and felt very elated when we got there. Not the top – the rest up to 7,500ft was for tomorrow. At Camp Nelson we found the tiny private RV and campground. Not much more than a grassy field with a shower block with hot water, which suited us fine. No sign of the camp host but notices that he would be around later to collect fees ( which in fact never happended, he seemed to be away for the night and in spite of our best endeavours we could not find anywhere to pay!). 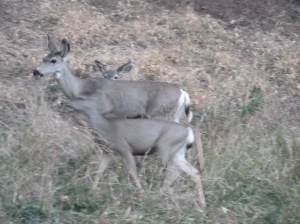 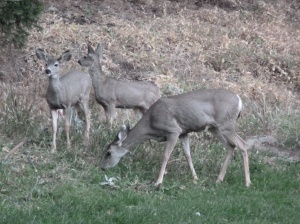 As we were cooking supper, 3 deer appeared and grazed on grass only a few feet from our tent. Clearly very tame and used to errant campers. After eating we strolled up to the Camp Nelson Tavern to find a thriving crowd.
Friday night in Camp Nelson was where to be! We sat at a table and shortly after struck up conversation with Anthony, who has a cabin there and was up for the weekend. Soon we were introduced to his wife Bonnie and to what seemed to be half the people in the tavern!  They have not been to England and we sought to persuade them that it was not entirely full of savages – but time will tell if anyone on our trip has been persuaded of this. 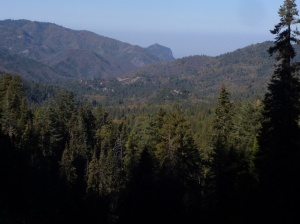 We had a fun hour chatting and exchanging stories before ambling back by moonlight to our tent. Our tent ‘neighbours’ were back and gathered round a campfire. They were a man and his 2 grown up sons who were there for the weekend to go hunting. Not had much luck that day but had possible seen the tracks of the alleged mountain lion that was said to roam the area – such are the stories of hunters! They were very pleasant and knew a lot about cycling and we talked Tour de France before finally retiring to our sleeping bags.