Jolly music blared out across the tannoy at 5.30 our time (6.30 local) shattering our sleep, as it was designed to do so. Coffee and pastries while we packed up and we disembarked about 8, cycling onto Dutch soil. As always one of the most difficult parts of navigating is getting out of the port and we fiddled about a bit round Hoek Van Holland but soon we were on the right cycle path along the Nieuwe Waterweg towards Rotterdam 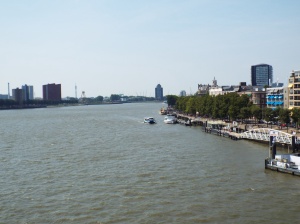 Flat is great when cycling, but only if there is no wind and unfortunately we had a stiff breeze against us. That combined with the early start and tired legs from our 80 miles yesterday made it feel as if we were cycling perpetually up hill. Towards Rotterdam the river curved away from the wind a bit and the route took us slightly away from the river bank so made the last bit easier – although replaced with the usual hassles of navigating through a large city. However, we safely made it into the centre of Rotterdam for late morning coffee overlooking the river again (now called the Nieuwe Maas) and the dramatic Erasmus Bridge.

A long leisurely stop in the sun with good Dutch coffee and we felt much better. It was good to feel there was no hurry and it did not matter where we got to that night – then the whole idea of lugging our camping stuff about is to give us that flexibility and we feel it is well worth it.

More cycling through Rotterdam suburbs – rather dreary but well marked bike paths the whole way to Ridderkerk to get a little passenger ferry across the river at the confluence of the Lek, the Nord and the Nieuwe Mass. Holland is certainly not short of water. While waiting we met a couple of retired English chaps (ex army , well retired and proud of it so definitely “chaps”) in their 70s who were on a weeks cycling trip round Holland. At last on the other side we were out of the city and into the countryside. 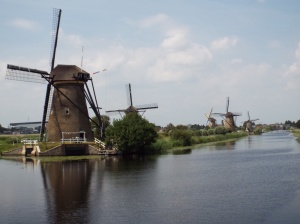 We were immediately in Kinderdjijk and one of Holland’s iconic sites. 19 windmills dating between 1738 and 1760 line the sides of 2 parallel canals. Built to pump water from the drained land between the Lek and the Nord, which like much of Holland lies below sea level. Some brick, some thatched and some stone, some restored to working order, they were a very picturesque site as we cycled the bike path between the 2 canals. The wind was now slightly behind and we scooted along at last eating up some kilometers. The bike path then led up to the dyke along the river Lek. We are on the Rhine route but as the Rhine reaches Holland it divides into several different channels to the sea. The Lek is the most direct extension and the one we will be following until we reach the Rhine proper.

A late sandwich lunch by the restored windmill at Streefkirk overlooking the Lek while the other side showed the low lying land – thus showing Holland’s challenge all in one place (apart from trying to win he World Cup of course and inevitably getting far further than England or Engeland as it is spelt here). We were awed at the skill of the Dutch over the centuries to claim and retain all this land that by rights should be under the sea.
Just after Streefkirk the bike path diverted briefly away from the dyke to the low pastureland and past the Eedendenkoi Nature reserve with unusual nesting baskets for the ducks suspended over the waterways. This took us a couple of kilometres of gravel track and several cattle grids. Of course the inevitable happened, and I got a puncture. Another inner tube bites the dust.

Back at the Lek for a final few kilometers to the ferry to the opposite bank and the pretty medieval town of Schoonhoven. A quick spin round the town and then getting competent directions in perfect English from a random passerby we soon found the campsite. Aah – the other reason we like camping. A lovely grassy meadow on the bank of the Lek with views you would pay a fortune for in a hotel. 12 euros plus 50c each for boiling hot showers and you even get the pleasure of an incredible bargain!! We quickly fell into our camping routine – David pitched the tent while I got a brew going. Our one pot meal tasting like cordon bleu after a days cycling and we are still sitting out as the sun goes down in T shirts in a balmy summer evening. The bells from the church on the opposite bank playing tunes (no change ringing here of course) wafting over the water, cold beers from the little campsite shop……..oh it’s good to be back on the road!

2 thoughts on “Hoek van Holland to Schoonhoven (via Rotterdam)”