Bernie: After an “average” Holiday Inn breakfast and a last glance over the Aardvark we were on the road at 8.30 with no delays. We cycled over the main bridge (which of course had a bike lane) and looked over at the bridge that was the cause of so much suffering in 1944. It was then an easy ride out of the city along the water meadows by the river. 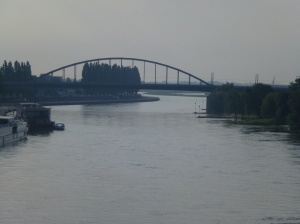 A short ferry crossing after about10km and then a very pleasant ride in sunshine to Milligan where the Rhine divides into the Neiderrhein (which we had been riding along) and the Waal. So this was our first sight of the full Rhine rive. After a few km we made another ferry crossing, this one on a tiny boat packed with cyclists – some touring like us and some out for a Saturday morning ride.

We found a bike shop in Milligan where I was able to get a flag for my trailer and a ‘souvenir’ bell with a picture of a windmill to ting at pedestrians (who share most of the bike paths) and a very occasional cyclist I overtake to warn them of our approach. One of the perennial complaints in England is that we cannot have routes which share bikes and pedestrians. Here almost all bike routes do that and there is little evidence of grannies being mown down by mad cyclists around every corner.

The bike shop was just in the Netherlands but very shortly afterwards we were in Germany, although there is no marking of the border. The cycle path then mostly took us along the top of the flood dyke on a cobbled surface. We also had a strong headwind and it was getting hot so it was hard going. We had a coffee stop at Wardhausen where we met a nice dutch couple who were cycling the Rhine route the other way from Basel to Arnhem. Made a mistake of not refuelling with food and the next section felt very tough. Headwind, 30 degree heat and not enough food and the legs felt like lead – this was flat cycling but still felt hard. We lunched overlooking the pink Emnmerich bridge – the longest suspension bridge in Germany and felt a bit better.

The next section was on country roads and I managed to properly slipstream behind David – as long as the tip of the flag on his trailer was touching my bar bag I got the benefit but if I slipped further away it disappeared. This means I have to be very alert to make sure I knew if David was breaking or slowing down. This must be what it feels like to cycle in the peleton, albeit they go a tad faster. It did make it easier for me while David headed the wind all day.

We passed the bizarre Wonderland Kalkar – a theme park built in a disused nuclear power station – now there’s a first! The plant cost $4 billion and was completed just as the Chernobyl disaster occurred and it never went into production. I suspect this was the time when the Greens were in coalition government in Germany. 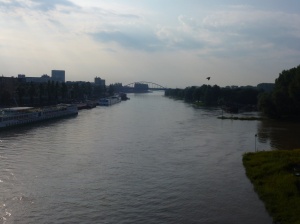 At mid afternoon we reached the very old town of Xanten (the only German town to begin with an X for those quiz lovers among you). There was a summer festival going on and the town was buzzing. 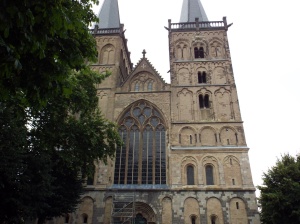 We had tea and yummy cakes in the pretty square but we couldn’t go into the old church as a wedding was going on. 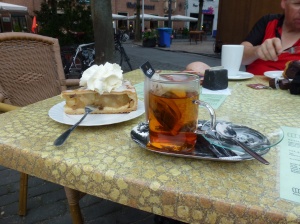 The sky had begun to cloud up and as we were setting off and as the bride and groom emerged from the church the wind started to swirl and first drops of rain felt and distant thunder heard.

We were still on quiet country lanes alongside the Rhine but were soon in rain gear. Thunder and lightning felt very near as we continued pedalling and I mused on the likelihood of being struck by lightning but thought it equally likely to be hit if we stopped and sheltered so carried on! The only blessing was that the wind had changed direction so we weren’t cycling into a headwind. After about an hour the storm had passed over and the sun was out again and we were drying off on the last section into Rheinburg. We found a small hotel with that musty smell of such residences but a nice room and ate Italian food at a close by restaurant with a Dutch couple who we cycled the very last bit with and checked into the same hotel – Harry and Tinika. They were on their way to Crete on bikes, so we were in good cycling company.

It was still warm enough to sit outside and relax and recoup ready for tomorrow where we head into the industrial heartland of northern Germany.