David: The hotel appeared to be a German version of Faulty Towers. At 9.45 the previous evening I was downstairs putting the blog on the internet when the reception lady (Who Harry said fitted a Dutch expression “she did not invent gunpowder”) told me that she was shutting up shop and “You must go to your room”. So I did!

Breakfast did not start til 8, and there was no possibility of an earlier start. So we were there at 8 in our cycling clothes but it was still nearly 9 before we were on the road. Getting going is so difficult! The legs are stiff, the brain is still drinking coffee and the route is never clear. After a few false starts we found the road and were on our way, with a bit of a tailwind as well. That was a welcome change. Although, as always, the tail wind was far less than the headwind. A physicist will tell me why but it is a point of constant irritation.

Our first aim was Duisberg, which is the German Sheffield (without the charm). It is the confluence of the Rhein and Ruhr rivers and half of all German steel is made here (another valuable quiz question answered – which town in Germany makes the most steel). We hit this town on a Sunday morning after what appeared to be a serious Saturday night of partying. Everyone was walking around with a face which said “please don’t speak too loud”. It must have been one hell of a party. I even got a fragment of glass (broken bottle I suspect) in my back wheel and got a puncture. Why is it always the back wheel? The front one must have missed it but sure as sure, the back one cops it. 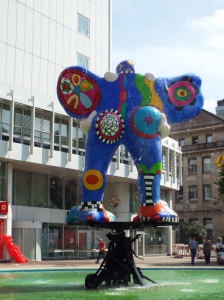 The most remarkable thing about Duisberg is the 20 metre high statute known as “The Lifesaver” created by French artist Niki de Saint Phalle and her swiss husband, Jean Tinguely. It has been voted one of the worst pieces of public art in the world, which is some achievement given all the competition. I took front and rear photos and you will have to judge which side is better.

After Duisberg the route alternated between roads and tracks, with navigation not altogether easy. At one stage we found ourselves on a motorway slip road which is as verboten for bikes in Germany as it is in England. Plenty of helpful people were quick to point out our errors.

Eventually we re-found the river track (not that we had lost it – there are just places it does not exist as there are inconveniences like massive industrial plants to go around. This the heart of German industry and is the only thing that keeps the Euro afloat so we should be pretty forgiving. Hid amongst the industrial sprawl were gems of towns like Kaiserswerth, which were old, pretty and full of happy people enjoying the Sunday sunshine. From here the river path took us south to Dusseldorf where we stopped for lunch (rolls filled with breakfast materials smuggled out from under John Clease’s nose when he was not looking as this was Sunday and so everywhere else was closed or at least that is our excuse).

Dusseldorf had a bad time in the war – another victim of Bomber Harris’ misguided attempt to change popular psychology. The new architecture was stunning as were the posh Dusseldorfers out for a sunday stroll, bike ride or pushing a new addition to the family. All very attractive. We ambled around and then got lost as almost everywhere we wanted to go was barricaded off for a women’s road race. We eventually found the way, conscious that we still had a long way to go.

Next stop after 30km was Zons which I doubt is the only German town beginning with Z (for the significance of that please see entry on Xantan yesterday). It was a town with a history. The bishop set up a poll booth and charged boats a fee which used the Rhine. The town grew rich and buildings sprung up to mark the prosperity. Then – just to spite the bishop – the river flooded (as it does) and when the waters subsided the river had a new course away from the town. The boat masters got off the toll and the town went into decline.

For us it was notable for 3 things. First, it was the centre of the German plastic bird sale business. I enclose a photo of some on sale. I suppose if tolls are gone the town must thrive another way! Second, great apple-cake and hot chocolate and third, but perhaps the most notable, the campest young waiter I have ever met. What he was doing in a tea-shop in Zons is a mystery as there must be bars in Berlin that would hand over significant numbers of euros for his services.

Anyway we left Zons on the bike path with that mystery unsolved and headed south to Koln. It was 5pm now and the rain threatened but did not fall on us, but it was clear it had rained heavily there earlier. We plodded on getting a tad tired but we knew we had a day off tomorrow and that we had a hotel booked.

We lost the bike path around the largest Ford Factory I have ever seen – Halewood eat your heart out – and then found it again. The twin towers of Koln cathedral were welcoming and welcomed. The sun came out and we rode into town, getting to the hotel by about 7.40. 122km is a longish day but we didn’t start early, there was lot of mucking around and route finding and it was time (after 8 days) to have a day out of the saddle.

1 thought on “Day 4: Rheinberg to Koln (or Cologne in old money)”