Bernie: It was great to wake up leisurely in our comfy bed. Trivago had come up with a great offer on this 4* hotel a few hundred meters from the cathedral square. Money is made from the extras of course so we coughed up for access to the internet but declined breakfast, opting for a stroll to the main market place for coffee and breakfast in a little cafe. 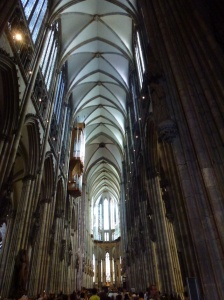 David needed some maps of Germany for the Garmin. Lack of organisation meant we were still trying to download them just before setting off from Bewdley and then we managed to lose the silly fiddly micro-sim thingumy.

The tourist office gave us directions to a couple of bike shops and we had a pleasant stroll through Cologne streets. They did not sell them but both directed us to a big outdoor shop. There we struck lucky with a very friendly shop assistant who rather than sell us a proper Garmin map for 160 euros said he could download us a european bike map for free if we had an 8G microsim. A 12 euro SIM card later and he downloaded the maps for us while we went and wrote some post cards over a cup of coffee! 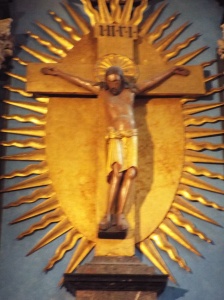 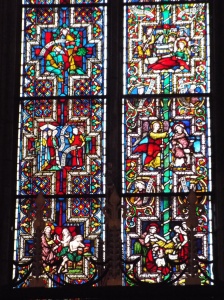 After that strenuous stroll we rested back at the hotel then off to the Dom (cathedral) from some serious culture. We arrived for the 2.30 english tour and had one of the best guided tours we’ve ever had. We all had headsets so we could hear the guide who had a small microphone and therefore wasn’t yelling above the throng. The history was fascinating – started in the 1240, building went on for a few hundred years but ran out of money in the mid 15 hundreds and it remained half built until 1840. Koln gained (looted?!) the relics of the Magi (the 3 kings) from Milan in the Middle Ages and set themselves up as a major pilgrimage site, but it did not generate enough to fund the new building. There was more money around with the industrial revolution when King somebody funded he rest of the building. The 3 skeletons plus 3 skeletons of other assorted obscure saints (names forgotten) are contained in a huge gold casket. 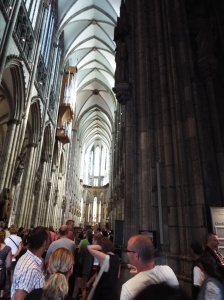 Recent examination of a shroud shows they do date from the 1st or 2nd century Syria but one of the skeletons appears to be of a 15 year old boy – well who cares, seems to have brought in the cash to complete an extraordinary building. In the Second World War the glass was removed from the stained glass windows. Some of the very old windows have survived and are incredibly beautiful but others did not. A new window has been in place since 2007 designed by a famous german painter Gerhard Richter. Designed in part with computer it is abstract but with subtle symmetries in 72 colours to reflect colours found in the older windows. Done pro bono (presumably a good loss leader and immortalises one’s name) the rest of the funding was raised through crowd funding from thousands of individual donors. We both really liked it. In contrast there was a beautiful 10th century crucifix – almost serene compared to the later rather more gory crucifixes still seen today. Lots of other art and stories. 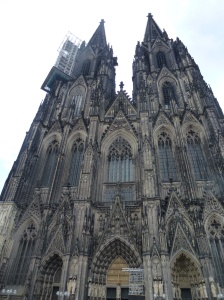 After that cultural extravaganza we felt too ‘full’ to take in any more museums – even the famous roman mosaics. They will have to wait for next time. Instead we opted for a swim and a sauna back at the hotel – good repairing medicine for sore legs. We finished the day by strolling down to the riverside to a lively area with lots of bars and had a famous Koln beer accompanied by some live music with a good saxofonist and our first ice cream of the holiday! A good day and ready to move on tomorrow