(David) This was a mixed day, with wet bits and dry bits but all’s well that ends well. 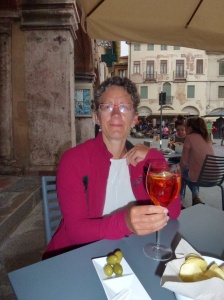 We woke and I failed to create enough of a fire for a brew so we set off without coffee or tea inside us. Fortunately it was downhill to start with.

BThe road followed the tumbling river down to Agordo where we made up for the caffeine deficit with excellent Cappuccinos. There must be bar/cafe’s like this throughout Italy but this one was so typical. The town’s population passed through the cafe on a daily basis, having coffee, chatting about the weather and gossiping and generally treating the place as a hub of social activity. Old men propped up the bar and the landlady (friendly, slightly overweight and knowing everyone) both served customers and presided over proceedings. The arrival of a couple of damp English cyclists was nothing peculiar. We sat at the edge of this social interaction and watched on as the town ambled through the cafe. 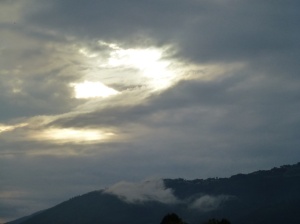 Back on the bikes, refreshed by good coffee, we cycled on in our rain coats as the day looked gloomy. The road continued to descend down towards the plains. We thought there might be a hill or 2 to climb but rivers tend to run downhill, even in Italy (where they might take their own course, of course), and so we had gravity with us all the way down. But the rain was set in. The surface was good but the road was quite busy, with cars splashing water on us from vast puddles. At one point as we were motoring along at about 30kmph a car slowed and the passenger opened the window and took photos of the drowned rats that the car was overtaking. However despite the rain it was not cold. So we were wet and warm which, as every cyclist knows, is miles better than being wet and cold.

There was one long tunnel between Agordo and La Mas which we managed to avoid by taking the old road. There were signs up to show that there had been major battles here but it was not clear which war it was referring to or which side the Italian forces had been supporting during the battle (since they changed sides in both first and second world wars if my recollection of history is right). 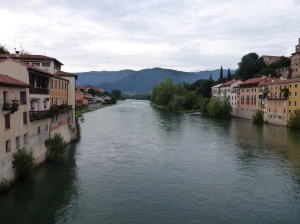 At this point it is worth noting something that we observed in both Germany and Italy, namely that the “history” in public buildings, street names, statutes and the like generally misses out the first half of the 20th century. On one level it could be seen as a collective amnesia or a conspiracy to airbrush this period out of German and Italian history. However I suspect it is more straightforward. There are loads of statutes of Garibaldi and roads named after the father of the Italian nation but not statutes of Mussolini or roads named after Il Duce (or Hitler in Germany). The explanation is probably that statutes were torn down on a local level (by invading armies or locals after the war) and streets were renamed on the basis that this was not something the locals wished to be seen to be continuing to support. The net effect of all these local decisions is an airbrushing of public recognition that this is part of the history. None of us likes to be reminded by failure and so it is all understandable, but nonetheless it is something that stands out by its absence.

Having 50km under our wheels we felt it was time for another stop, so we dripped our way into another cafe, this time in Santa Guistina. They did not seem remotely concerned that we had deposited large amounts of water on the floor as we drunk our coffees and dried out for a while.

The next section looked like a quieter – yellow – road on the map but was a yellow road that had been been “improved” and was hence a major thoroughfare for trucks. We survived (despite the rain) but by 2pm we were feeling peckish. We stopped at a roadside eatery, which served 3 courses, wine and coffee for 11 Euros. There are some benefits of being on a truck route. Superb value with pasta, meat and even a small beer for me. 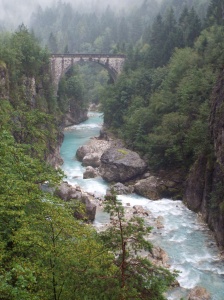 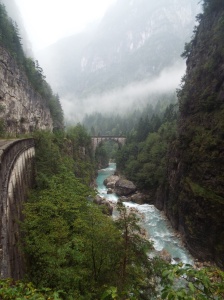 By the time we had finished we felt replete, and then had one of those “moments”. Bernie went out to load up the bikes and was confronted by an elegantly dressed woman in her 30s, cigarette in hand, who looked quizzically at the bikes. With the benefit of translation of her son she expressed some amazement that anyone would chose to cycle in her country with that amount of luggage, would chose to camp and would cycle in the rain. After all, it would mean that her make up would run and, judging by her expression, this was something that she could not understand. Her expression was a mixture of admiration and total lack of comprehension.

By the time we came out of the cafe the rain had finally stopped. We pressed on and cycled the last 30km to Bassano. At one point the road signs said 14km to go and then 10km and then 7km. Our map indicated that it was at least 10km more than this if not more. But the road signs were consistent. Then, after 7km the next sign said 15km, which seemed right. What is interesting is how a series of signs could be wrong, so close to a major town. Mystifying but it happens all over the world.

By this time the rain had eased but it was still overcast. The sun peeped through as we got to Bassano del Grappa. The “Grappa” is a mountain that overshadows the town but also gives its name to the liqueur which is made in this region. 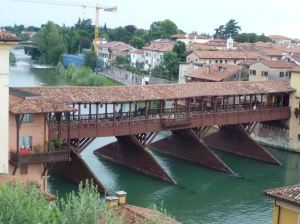 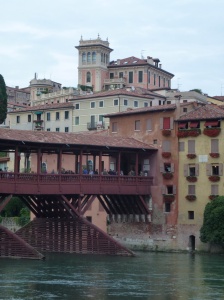 We booked into our hotel (cycling rule number 17 – don’t camp if it is raining) and then ambled into the centre. The town was charming, slightly faded, the buildings were diverse and stunning. In particular there was a covered bridge – the oldest in Italy although substantially rebuilt after the 2nd world war, that served as a place to congregate and drink an orange drink. We tried this and found it was a mixture of white wine, grappa, apple juice and goodness knows what else. It was fabulous to sip as we sat in the evening sunshine on a palazzo watching the world go by. What a brilliant day in spite of the weather.