We woke and had a surprisingly good breakfast at the “lack of character” hotel, and then packed up for the short cycle into the centre. Our first stop was the Cappella Delgi Scrovegni, a famous church with frescos painted by Giotti.

This was said to be the highlight of Padova (also known to us as Padua) and thus could have been a disappointment because our expectations were so high. However nothing could have been further from the truth. It was stunning and fascinating. A feeling of awe as we first stepped into the now carefully climate controlled chapel. 20 years had been spent restoring the 950 year old paintings that had marked a step change in renaissance art for the ‘real life’ look of the paintings that though simple managed to convey deep emotions rather than the blank look of former ages. No photos were allowed so for those interested in the frescos I suggest you look at their website:

After this overwhelming cultural experience we ambled around the museum contained a large number of Venetian paintings from various ages. They were both biblical scenes (with the Venetian patron mysteriously appearing in first century Palestine) and portraits of noblemen and women in various styles. This was good but not quite on a par with the Giotti. 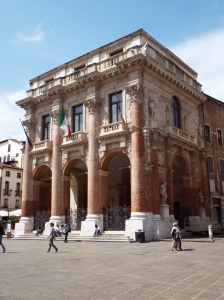 We then went into the main area of Padua and walked around for an hour, sipped coffee and looked at the fruit market (with magnificent buildings surrounding it).

A stop at the small but perfectly formed bapistry next to the main cathedral, also covered in stunning frescos. Last stop on this cultural tour was the cathedral of St Anthony of Padua, the patron saint of lost persons and things. He was a Franciscan monk who was one of the greatest preachers and orators of the early Middle Ages, dying in 1231 in Padua.

The cathedral was impressive but the most striking thing was that the majority of visitors were not tourists but were making devotional visits. Church attendance in Italy is still at about 23% (i.e. those who go regularly as opposed to every week) in contrast to France where only 5% of catholics attend mass regularly. We could see this in the way that St Anthony’s help was sought by lines of people all wanting to access divine assistance for lost things or people.

The official Catholic Church may be dwindling in importance in Italy but it is not as moribund as in other places and the popularity of the present pope is clearly a factor that is boosting congregations (or at least slowing the decline).

After this experience we left the city, navigating by instinct more than by maps and eventually found the bike path to Venice.

It followed a canalised river and was very pleasant, slight downhill and quiet. The sun was shining and we followed this all the way to the memorable place called “Malcontenta”.

At this point we had a choice. We could follow the bike path to the end of the peninsular at Fusina to catch a ferry to Venice, or cycle round the port and along the causeway. We chose the causeway!

Cycling around the port meant that the road was industrialised and full of container lorries. Not great but it had to be done. We saw several young(ish) women sunning themselves in deckchairs at the roadside beside ancient camper vans. The side of a main road outside a port seemed an inexplicable place to top up a sun tan until it dawned on us that perhaps the campervans were for a “business” purpose. It was a port after all.

Getting on to the road to the causeway was not difficult but it had the feeling of cycling along a motorway. However none of the traffic came close to us and by the time we were over the water it was fine. The causeway was built during Mussolini’s time, which means that all access to Venice was by boat before then. 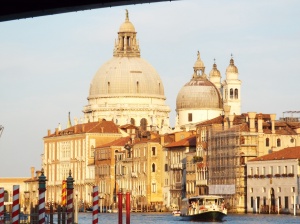 Cycling the last few kilometres felt strange. We were elated at finishing the first part of this trip but sad that it was coming to an end. Venice looked beautiful with a maze of buildings, and we knew we had reservations at a decent hotel to treat ourselves. It was 5pm and all we had to do was to negotiate ourselves and the bikes to the hotel and it would be completed. 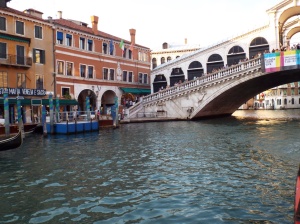 BUT – and it was a big but – we had underestimated the complications of bikes in Venice. Essentially Venice is the least bike friendly city in the world. We knew that there were no cars in Venice but had not appreciated that there were no bikes either. There are steps everywhere in this city. Managing a pushchair is hard enough but bikes would be impossible.

It took 2 hours of thrashing about before we finally found somewhere that would store the bikes for 2 days near the entrance area. There was a place for public bike storage but ominously the only bikes there appeared to be abandoned or to be in parts. It did not feel a safe place for our beloved machines. The car park charged 10 euros per bike per day seemed a bargain after all the hassle. They even did not charge extra for the trailers, but then there was no “rate” for bike trailers. 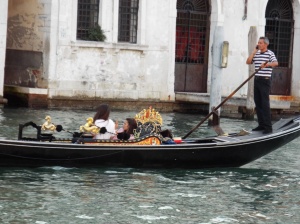 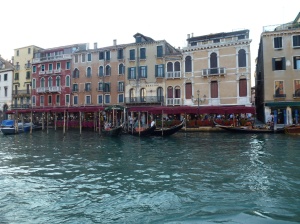 We then got the waterbus around the grand canal to get off at St Mark’s Piazza and the hassle of the last couple of hours began to fade as it really dawned on us that we had arrived and we began to see this incredible city in the late evening sun. We strolled across the main Piazza, arriving at the hotel just before 8pm. We had a lovely meal (albeit at tourist prices as we celebrated our arrival in this fantastic city).  A group of foreign tourists came into the restaurant and were very loud.  We amused ourselves by speculating how many facelifts one of the women had had.  I thought maybe 1 or 2 but Bernie, with extra medical knowledge, suggested that foreheads that small did not arise from one single op, and that 4 was a better estimate.  We still have the capacity to be catty!

One of the joys of the trip has been not being in tourist hot-spots but being able to choose where we wanted to go under our own steam. Venice changed all that as we felt herded amongst the thousands of visitors. However Venice is far more than visitors with 60,000 people living here on a full time basis. However the permanent population is falling (it was 170,000 in 1951) and there is clearly a worry about making the city viable as something other than a tourist destination.

We look forward to a day exploring the city and hope our promised bike bags arrive so we can transport our bikes back to the UK! However to close chapter in our blog, this has been a brilliant, contrasting, fascinating and mildly challenging (intellectually at least) journey so far. The next leg will, we know, be very different but at this point we are ready to come home but exciting about the prospect of returning to continue to inch our way across the globe towards our eventual goal of Australia.