As we thought, heat would be one of our major issues and hence the alarm went of at 5.30 to get an early start and beat the heat at least for a few hours. We packed up our impromtu camp by the car park (much nicer than it sounds), the only delay being the search for matches. because no matches meant no coffee! Having emptied every bag and abandoned the hope of a cuppa before setting off we found them in the most obvious place that neither of us had managed to look! However even if we had been deprived of our caffeine boost we would have quickly woken up. 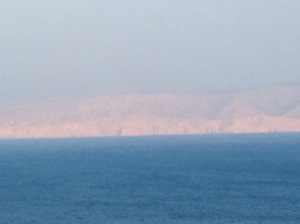 Having cycled out of the campsite and on to the main road by the sea we both gasped. The view across to the islands to our west was incredible – the early sun rays coming over the mountain behind us lit up the shape of the islands across the water. They almost looked fluorescent in a cobalt blue sea, every detail of the stark landscape picked out whereas the previous day they just sat in a heat haze. The temperature – at 7am – was like a warm summer day in England although there was a swirling wind.
We pedalled for a few Kms along the sea then the road went inland just slightly. As the mountains meet the sea fairly precipitously along this stretch of coast, leaving the line of the shore means one thing – climbing! So as the sun climbed, we climbed and the views got even more spectacular. It was a wild landscape with little vegetation. The wind got up as we got higher and we faced even more buffeting – sometimes a head wind (doubly difficult when also trying to go up hill) and sometimes behind as the road weaved in and out and around. Most scary was a side wind pushing us towards a cliff edge! They have little stone pillars here to mark the side of the road – that might stop a sports car going over the edge but a cyclist would just topple over the top! 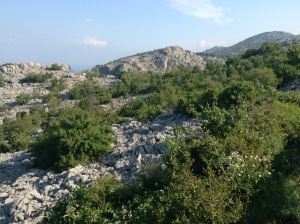 Eventually we topped out after about 1000ft of climbing (again) then undulated on the road high above the sea to our right and rugged mountains to the left. 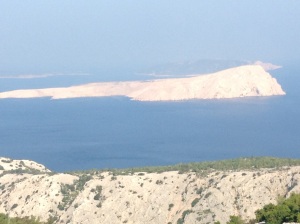 Just as we were craving a coffee stop a little cafe appeared in a tiny village. It was a perfect stop – second breakfast (my favorite meal) of omlettes and coffee and assorted locals jabbering away. At one point a Slovenian couple arrived on a smart motorbike – all leathers and baltic power dressing! He smoked and she ate omelette. The characture of the slav hard man is, of course, just that – a stereotype of the baltic fighting man. But there are plenty of men living this character, with a perpetual cigarette hanging out and a pretty girl on their arms. 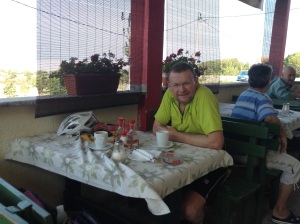 There seem to be plenty of men (and women for that matter) living up to the sterotype!
Replenished for a few more ups and downs then more down than up followed by a steep road down away from the main road (which had been reasonably quiet of traffic) to catch the ferry to Pag Island. We took some pleasure in zooming past the lines of cars queuing for the ferry (ignoble I know) to hit the front of the queue just as the ferry arrived. The 15 minute ferry ride was just long enough to cool down in the air conditioned cafe on the boat before turning out into the furnace! 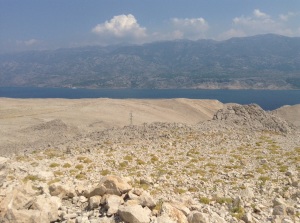 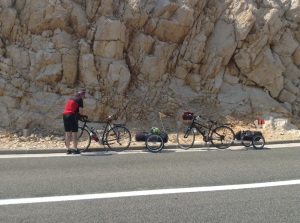 Almost midday now and this side of the island is described in the guidebook as a ‘moonscape’ and a very accurate description it was too. Of course there had to be a climb out of the ferry port (just a small shed) to the ridge of the island. Mad dogs and Englishmen…….say no more…but the heat was tempered somewhat by a breeze. Having reached the main road that runs north/south along the long length of the island we had a choice turn right to Novalia, described as the party beach of Croatia, and only a few kms away or turn left to Pag town. Again guided by the guide book that said depending on whether your age was under or over 35 you would love or hate Novalia so attracted though we were to clubbing all night (!) our early start turned our wheels towards Pag. We later learned that Ant had travelled all the way from Belgrade on an overnight train to party on the beach at Novalia – and said it was very good and he got home at 7.30am!
We were now cycling in near-lunatic mode. It was 41+ degrees and we should have been out of the sun but we just wanted to get to Pag Town so we could finish up the day. The map showed a little road along the coast that was half the distance than the main road and avoided some steep hills. It was – in OS terms – a “white road”. The reason it was only marked as a white road on the map, as it turned out, was because it was mainly a dirt track. Good for mountain bikes (and we saw some) but a tad tougher for road bikes with trailers.
We were getting significantly worried about heat stroke so we huddled into some deep shade of a tree and ate lots of salty crackers (brought for just that reason) and bananas. This meant we cooled down a bit. Then back to picking our way along the dirt track which went on and on and on (about km anyway). David was definitely suffering but with 5km to go the track changed to tarmac so the going was much easier and it wasn’t too long before we were rolling down into Pag Town. 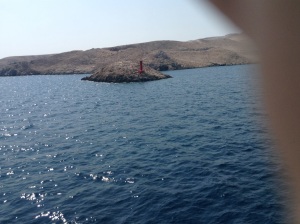 The Tourist Office was blissfully cool but told us there were only 2 hotels in Pag. They were full, …. the tourist agency that arranges rooms and apartments said nothing was available but pointed out 2 hotels who had not paid their tourist office dues (and so were ignored by the official agency). Beginning to think about a Plan B but brains too addled to think we spotted a Taverna opposite that advertised rooms. David went in and to my huge relief gave the thumbs up! We landed on our feet – they had an air conditioned apartment. Big enough for 5 but the only one available so we grabbed it and after a few days in our little tent, we enjoyed swinging a few cats around. 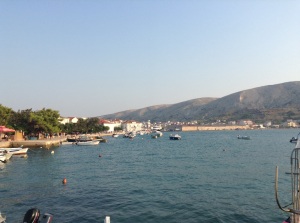 3pm and at last we could siesta through the rest of the hot afternoon. In the late afternoon we ventured out and strolled slowly round the pretty town eating icecreams. 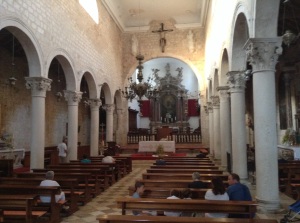 Streets of the same tat that is sold in every seaside town in every country. Back as the sun was setting, managed to skype Anthony and speak to Jeanette before David cooked a delicious meal of fish and salad.