So it’s official. We are in the middle of a heat wave in this part of Croatia. It’s not our imagination or even totally bad planning! Even the locals complain about the heat.

So 5.30 up and away before 6.30am. No sign of the mad landlady although she swore she would be cleaning from 4am. Slight panic when David could not get the key to the place where our bikes were to work, but brute from me sorted it.

This meant we were able to make a quick get away. Croatia seems to wake early so we were by no means first on the road. The temperatures were cool though (relatively that it is – a mere 24 degrees at 6,30) and the first section of road flat along the coast to our first stop in Biograd for coffee. Traffic was beginning to build though on the main road along the coast so we took a road that went slightly inland to get away from the traffic. It was blissfully quiet after the camper vans whistling by us (yes that will be us in a few decades time) and within a couple of km a world away from the beachside holiday resorts. We pedalled through dry scrub land passing occasional non descript villages and l holdings of a few vines and tomatoes. Each village would have a shady spot under which sat a group of men chatting No women to be seen.

It was great to get away from the main road but we also lost the sea breeze and it was getting hot. We were carrying 7L of water between us and were getting through it. I know I keep coming back to the weather but when we stopped at our highest point for a cold coke it was 39 degrees in the shade and the garmin measured 49.5 degree in the direct sun – so my obsession with the heat not unjustified I feel. The last 25km down to Sibenik were therefore somewhat of a trial – luckily mostly downhill but at one point a long straight road lined by scrubby landscape shimmered into the distance and seemed to take an age to get to the end. 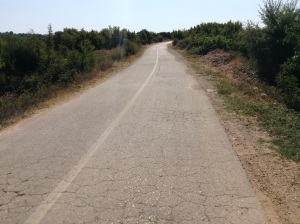 At last we hit the main road and soon a dramatic high bridge crossing a narrow inlet before the last few km to Sibenik. We had booked a hostel and found it easily. The last time I was in a hostel was probably before we were married but we had a simple room ( not in the dorms!) sand stayed inside and napped through the afternoon before venturing out at about 5pm.

The guidebook had given Sibenik a great write up and rightly so. Sandwiched between Zadar and Split it seemed to be often overlooked so although tourism is its main industry now (its aluminium works bombed in the war then too uneconomic to survive), the town was not heaving but is probably the prettiest place we have been so far. A small but interesting cathedral with a tiny exquisite baptistry, a maze of narrow cobbled streets climbing the hillside, again a small but exquisite medicinal garden attached to a monastery and to top it off (literally) a castle with breathtaking views out over the red rooftops and over the sea and myriad of tiny islands.

Any number of other churches that we did not attempt to see but wound our way back down the streets and found a lovely little restaurant for supper. The friendly waiter who was born and lived in Sibenik and now owned the restaurant was telling us a bit about the history before it got too busy and he was diverted elsewhere. We forget that the ‘homeland’ war is in the living memory of quite young people. 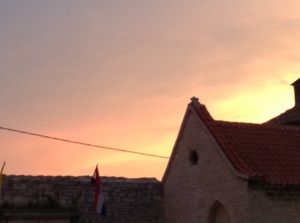 Many of the these areas were badly affected and bombed, although that is well hidden now. All in all, our best meal yet.