I am sitting in a cafe in a clean, attractive modern city which is plainly at ease with itself. There is a “beer festival” on at the moment (as it happens) and almost universally well dressed people are strolling around the pedestrianised parts of town in the early evening sunshine. If anyone had told me 3 weeks ago that this would our experience of Albania I would have seriously questioned their sanity. But Albania has been a complete revelation. We have, of course, only seen a small part of it but it has been almost universally impressive, full of welcoming friendly, people very reasonably priced and a land of outstanding beauty. So that is perhaps the main revelation to us from this trip so far – the unexpected wondrousness of Albania.

We started the day with coffee and the last of the powdered milk for our cereal. Then back on the bikes. The first section was continuing up the Shkumbinit river valley from just outside Librazhd towards Perrenjas. The valley was populated and verdant. In contrast to the area around Tirana, there was less obvious poverty and much less rubbish at the side of the road. The road wound up and down, but more up than down. There were frequent settlements and the views of this mountainous river valley were lovely in the early morning light.

We reached the town of Perrenjas and shopped for fruit, steeling ourselves for the climb to come. The road snaked 1000 feet from the town up to a pass at 3000+ feet, which was the ancient route to Lake Ohid. It was steep, beginning to get hot and tough going. We gots lots of friendly “toots” from cars and lorries going by and, bit by bit, we made it to the top. As we climbed the views back down the valley justified the effort. 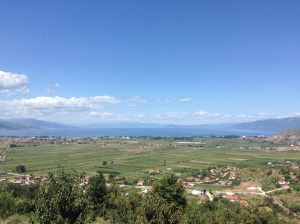 At the top we had biscuits which we shared with an old man at the side of the road. I was not quite sure what he was doing there but he was not in a great hurry but was not begging either. He seems astonished and grateful for one biscuit and amazed at a second. However his principal interest was the coupling to the trailer which he commented on in Albanian (but we were clueless) the gist of which was that he appeared to doubt would make the descent. I am pleased to report that, if this was his concern, it was misplaced.

The a glorious descent to Lake Ohrid, which is a freshwater lake about 15km by 30km at 700m, and is surrounded by mountains which descend to the shores. The lake is the border between Albania and Macedonia (not that we strayed into Macedonia but it looked stunning).

Having climbed for 32km (total 750m of climbing), descended for 5km and turned south along the lake for another 5km, we felt we deserved a coffee! We pulled into a hotel where – as always – men were doing the hard work of drinking coffee, smoking and putting the world to rights. As a man, it is a feature of this country which is enormously attractive. Our equivalent would be getting together in Bewdley of a morning to drink coffee, chat and exchange stories. On thinking about it that is how I have some of the best parts of Saturday morning for many years and so what’s the difference – except this was Tuesday.

Really good coffee but a slightly pushy hostess who (a) wanted to practice her English by telling us about her sister who is married to a Scottish man (about the 3rd Albanian woman we have heard of married to a Scot – what is it about Scotland?) and (b) persuade us to stay in her hotel that night. We declined but the coffee was good.

The we continued down the side of this beautiful lake – looking across to the Macedonian Mountains. We stopped for some refuelling by a “Pill Box”. This one faced Macedonia and they are all over Albania – relics of a paranoid communist regime. It was delightfully decayed – as of course is the threat of rebel forces crossing Lake Ohid! 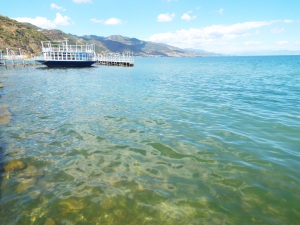 The town at the end of the lake was Pogradec, with hotels on the lake front and a standard town behind. We linked up with Pippa via WhatsApp and sorted out a few things, then started again. The climb out of Pogradec was – well vicious. It was about 1pm now and the heat of the afternoon set in. It was not Croatian heat standards but was bad enough – and was steep and hot. But we got to the top, descended and started another climb. Time for lunch – sitting on chairs outside a petrol station as this offered the only shade. The owners seemed very relaxed at weird western cyclists descending on them and eating their sandwiches.

I looked at the map and speculated that it may be fairly flat for the last 25km to Korec,mainly because there appeared to be irrigation systems along the entire route. Bernie poured copious amounts of cold water on this suggestion because, as she later admitted, she was really tired after the tough climbing and did not want to get her hopes up. But for once (the last time was in about 1993 I think) I was right. And we had a following wind.

So we cracked across this fertile plain (at 800m high) at about 25km an hour – and got to the lovely town of Korce (which I describe above) in no time at all. 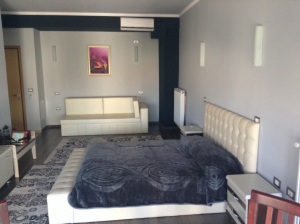 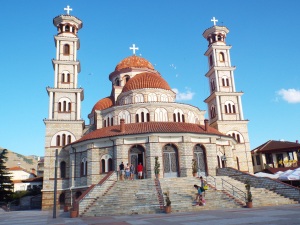 When Bernie left work her colleagues clubbed together to buy her a night in a hotel (generously for 2 people but it was obviously her choice who to bring). Our attempts to get a decent hotel in England proved unsuccessful so we booked ourselves into a really nice hotel here – so thanks to Frances and co (and thanks from me as Bernie has little choice of alternatives here – as far as I know).

Once we had sorted ourselves we went to a museum of medieval to modern religious art which was really interesting. The art survived the atheistic period of the 1960s and has now been collected in one museum. It was great to see styles evolving through the centuries but so much commonality between C14th and C19th orthodox art. It was really moving and provided pictures to educate and inspire the illiterate faithful over many centuries.

So overall an action packed, brilliant day. If we had not come up with this totally crazy idea of cycling to Australia I can guarantee that none of the things we did today would have ever occurred to us – but sitting here in the open air with a beer it seems that it was a decision which delivered both pain and pleasure – but far, far more pleasure than pain (at least to date).