Today was a good day, in fact a really good day. The rain storms of the last couple of days seem to have ushered in some cooler air and we both slept well with the relatively cooler temperatures, not even needing the AC, Too early for breakfast we brewed up our own coffee before setting off at about 7. Round the enormous Skanderberg Square (a famous 15thC warrior) and along the wide boulevards. Even though Monday morning the traffic did not live up to the write ups, although keeping eyes peeled for potholes and cars veering in unexpected directions was still required. 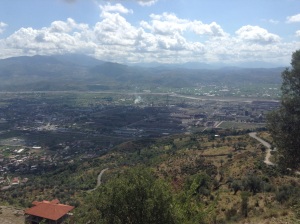 We were then on the old road to Elbasan – a new motorway having been built that blasted its way through the mountains in enormous tunnels. I had over-psyched myself for the day. I knew we had an 800m climb and although I was not so worried about the amount of climbing, we had managed that plenty of times before, I had been worried about the steepness, as I had found some of our previous steep climbs quite a strain, and forecast thunderstorms. Sometimes it is right to be worried but on this occasion my worries were unfounded. 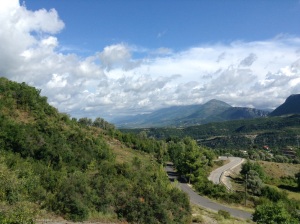 The day was bright, occasional threatening black clouds passed over without dumping on us, the air was fresh, the gradient challenging but manageable and I was feeling fitter and stronger after a good rest and more pleasurable day than expected in Tirana. Most of all the the scenery was spectacular and that always helps the climb. Not only that – when the the road split to take traffic to the motorway tunnels (the only time we have seen signs that bikes were not allowed along with horsedrawn carts and tractors) we virtually had the road to ourselves with only a handful of cars passing over the next 30km.

We did share the road with a young Polish couple, Anya and Peter, who were also cycling and we leapfrogged past each other several times during the day. The road climbed steadily through green treelined slopes with views of the mountains and valleys opening up and then along a fantastic ridge. We stopped for a coffee at a little cafe near the top and even had to put jumpers on for the first time since Gatwick!

A final contour round the hill then a marvellous descent down to Elbasan with fantastic views down into a new valley and Elbasan far below. We also had a birds eye view of an enormous metallurgical complex that was called the Steel of the Party. Built in 1974 with chinese money it had employed over 8000 people and was now lying redundant, a rusting scar. Terrible for unemployent but probably much better for the air quality of the valley. 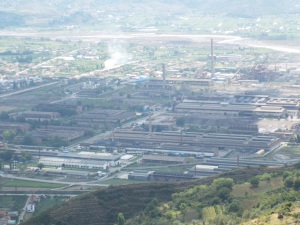 We trundled into Elbasan. There were some old roman walls, a very old mosque (being used for prayer as we passed so unable to see it) and old cobbled streets – one of them called the Via Ignacia, an old roman road that connected the Adriatic with Thessalonika and Byzantium so it felt very appropriate. We stopped at a shady cafe and had delicious fresh orange juice then pedalled out of town a few km to have our picnic.

We now turned almost due east. Like many mountain areas there was only one road but the traffic was not too bad and the occasional lorries gave us a wide berth (as we have experienced everywhere to now). For the first time we also had a strong tail wind blowing us along. The road followed a river through dramatic scenery, often narrowing right down to almost a gorge. A steady slow climb but with the inevitable ups and downs, none of them too bad. Threatening black clouds cleared to sunshine again but I was tiring as we reached the town of Librazhd. No sign of a hotel in town so we pressed on a bit further.

As we were leaving the town we had the usual clutch of small boys waving and shouting – although this time one of them decided to try and leap onto David’s trailer for a ride. This brought David to an abrupt halt and he narrowly avoided a nasty fall. I heard shouting and turned to see David shouting and pursuing the boys for a few meters while they sprinted off down the hill (I also saw a police car turn round which had them sprinting even faster!) Luckily David was not hurt, although a bit shaken and the trailer was not damaged.

We pedalled a few km out of town and was just thinking of finding a place by the river to wild camp when a small hotel appeared. At only 20 euros thoughts of wild camping quickly disappeared in return for a hot shower, wifi and a bed! Behind the hotel was a small picnic area – and there were Anya and Peter cooking up their dinner. After unloading our bags we took out stove down next to them and brewed up cups of tea and had a pleasant hour chatting to them. They were a great couple and I hope their dreams of having their small farm on some family land back in Poland come to fruition. As they set off to find a camping place David cooked our dinner on our balcony. A good day and looking forward to tomorrow.