The night was not brilliant because, following the storm,it was too hot and humid with the door to the balcony closed and we had the noise of main road and mosquitoes if the door was open. I thought that mosquitoes were not active during rain storms, but they looked for shelter and a bit of blood to suck, just like every other … (various smilies came to mind but none are printable so you will have to fill in the gaps for yourself). The air conditioning that had worked when we arrived continued to be dormant due to a total lack of electricity.

We woke at 6ish, breakfasted on the balcony of the large hotel – where we were the only guests – and then packed up and got on our way about 7.15. It was strange being the only guests in a nearly closed hotel, without electricity, and with the most mega storm for most of the night. It could have been the beginning of a horror movie but in fact worked out OK.

The roads were reasonably quiet but it was Sunday morning. However the absence of constant traffic meant that there was plenty of scope for drivers to show precisely why Albania has the worst road safety record in Europe (by some distance). Cars overtook in crazy ways and nearly forced us off the road. Makes Italy look moderate and sensible.

It was just 30km to Tirana, and the last 5 were on the motorway (which is great as we have the hard shoulder to ourselves – well some of the time when it is not used as an undertaking lane – in all senses of the word “undertaker”). The outskirts were just as you would imagine a city to be in the richer part of developing world. Loads of small factories, car workshops, car washes (what is it with car washing here – it seems a national pass time) and metal bashing yards of nondescript status, so it all felt a bit like Tipton. 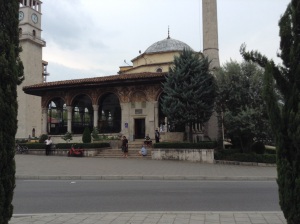 The centre of the city was planned by the Italians during the fascist era and so had wide boulevards, vast squares and impressive Italianate public buildings. It might have been a hateful ideology (it was) but it produced some decent architecture.

We found Freddys Hostel (no apostrophe) and were welcomed to check in even though it was only 10am. After a few admin things we went for a walk to the highly impressive National Museum. The most interesting parts were the sections on hellenic pottery which showed was a complex and developed civilisation the Greeks brought to this part of the world between C5BC and C3BC, and the reflections on the communist era which did not attempt to offer any excuses for the excesses, the terror and the purges. What is really interesting is how well Albania has developed since then, without reverting to another dictatorship after so many examples of that in the past.

There is a wierd pyramid that was a mauseleum to the communist dictator, Emver Hoxha.  This is semi-derelict now but tourists clambered to the top – we avoided doing so due to onset of sensibleness (or senility). 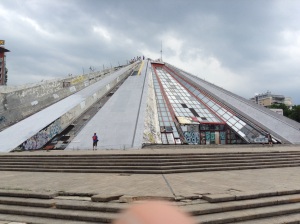 In 2009 Albania submitted an application to join the EU. It is a candidate country and the latest report suggests that it is making progress tackling organised crime and corruption but that these are long standing and deep rooted problems for the country. The “rule of law” was also identified as an area of concern, which supports Bernie’s concerns that Freedom From Torture still see clients from Albania, but overall the reports are positive and things are clearly moving in the right direction.

There is not a great deal else to see in the centre of Tirana except 2 impressive new churches – Orthodox and Catholic Cathedrals. Both impressive and, of course, new. A massive new mosque (no doubt built with Saudi money) is being constructed.

Dinner was pleasant and not a pizza. Traditional Albanian food which felt similar to Moroccan food in some ways. Then I managed to download new maps to guide us to Istanbul as that is our new target.