I am writing this looking out on a dramatic thunderstorm – pouring rain, forked lightening and booming thunder. Luckily we are under cover…..but I am jumping ahead. This morning was the beginning of our first full day in Albania and first day that felt an adventure in somewhere that was very different to Western Europe, with all the ups and downs that brings.

We had a pleasant breakfast at the hostel then strolled out into the city of Shkoder. First impressions of Albania is that there is a lot of concrete, lots of building and that the traffic is crazy. Cars make unexpected manoeuvres, cyclists and motorbikes routinely use the wrong side of the road and most junctions have no traffic lights. There is a limited sense of “priority” but the drivers are courteous (for the most). Traffic seems like a free for all when we first experienced it but gradually it started to make sense. Cycling can be done on any side of the road in any direction if one has nerves of steel!

We managed to get a data SIM card for the ipad mini as we were not sure how reliable wifi will be, then had a look round the town. In the centre is a massive new mosque built in 1990 and funded by Saudi money. It was built on the site of an apparently beautiful old mosque that was destroyed in the 1960s when Albania, under the influence of China, declared itself an atheist state. Many religious buildings (and religious leaders) were eliminated. The net result seems to have been a temporary suppression of religious observance, but it was not wiped out. China then ‘dumped’ Albania and stopped any funding, Albania became a democracy (and a real one with changing governments) in the early 1990s and there are new churches and mosques in nearly every village. 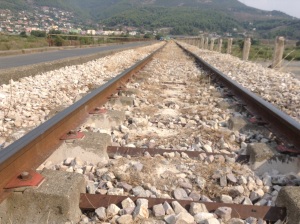 There were a few Ottoman buildings left in the centre of Shkoder on a cafe lined street. This was full of local Albanians and the first place we had really been that was not dominated by tourism. We went to a wonderful photographic exhibition of prints from one of the first Albanian photographers who started a dynasty that took thousands of photographs from the late 19th and early 20th century. There were scenes from Albanian life and historic events but it was the portraits and family groups that stood out. So full of character and artistry.

Time then to be back on the bikes. But not before going to pay the cobbler who had mended David’s sandal the evening before but rejected payment in Euros. Now that we had some local currency we visited him again. He wanted to charge 50 lek (about 25p) but we rounded it up to 100 lek. I think he was very surprised to see David again. It was good to surprise someone in that way.

We took a back road that hugged the base of the hills at the edge of the wide valley down towards Tirana. The road was quiet, often bumpy and pot holed and took us through rural towns and villages. There was lots of waving from kids and men trying to ‘help’ if we stopped to look at the map. Having left late in the morning it was hot and humid – although the temperature was a bit lower than it had been. To try and make some headway we cut back to the main road for about 10km. This was perhaps a mistake as there was lots of traffic and a ferocious head wind. David took the wind as i was tired from the day before.

There was, of course, rubbish (and in particular plastic) everywhere and we passed several rivers or ponds that assaulted our sense of smell.  This is a perenial feature outside the developed world and it is not for us to judge  – just to observe.  But it could hardly be missed and was a massive change to Montegegro and Croatia.

After stopping for a Coke we felt a bit renewed and found a lovely side road again. This time the route was flatter and through greener country and, as the afternoon temperatures began to fade, I felt much better and managed to pick up speed and make more progress. The guidebook suggested that the tap water although treated was not probably up to European standards so we used our new gravity filled ‘platypus’ water filter fir the first time.

As we paused to take some photos we were passed by 2 young German cyclists who were cycling from Germany to Corfu. We were making very good progress on a well paved road when the road surface deteriorated rapidly about 10km from our destination. We decided to cut back to the main road again – and again this was a mistake (with knobs on). Having been directed down a road that turned into a gravel track we hit the bottom end of the motorway before it became the main road again. Now motorways are not quite as we think of them so a gravel track joining directly onto the motorway did not seem unusual and we had already established that you could cycle on the motorway. Unfortunately though we were on the other side to the direction we wanted to go and there was an enormous high barrier preventing us getting to the other carriageway (which is of course what you would expect on a motorway!) Confident that we were near a junction we cycled a couple of km in the wrong direction and in fact reached a hotel. By now the afternoon was drifting away and I was very tired so we checked if there was a room and decided to take it. 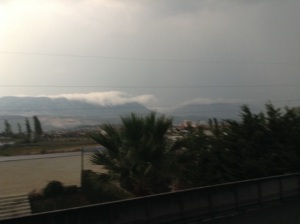 It was only when David asked about breakfast we were told that the restaurant was closed and there was no food – no good for starving cyclists so back on the bikes and over a bridge but then we could not find how to get back on the motorway in the right direction. We managed to make ourselves understood through gesticulations to a passing moped rider who directed us to follow him. We had missed a tiny gravel track twisting back on itself as we came off the bridge but were rescued by a passing motorcyclist. He showed us the dirt track that gave access to the motorway. Crazy!

On our way again but in a couple of km we hit a huge traffic jam as the motorway ended and became a single lane main road then10km of hellish riding as traffic streamed past. As we were nearing the town we passed a nice looking building advertised on the hoarding as a hotel and restaurant but in fact it was not a hotel, just a large function room. Once again, hearts sinking.

The next hotel sign and we cautiously stopped again. There was a for sale sign (Shitet) but decided to ask. Hoorey, this was a hotel, a large simple but clean room and she could do us a room and pizzas. We did not hesitate! Just as we showered, a huge thunderstorm broke – this is where you came in – boy were we glad we weren’t still on the bikes!

David commented that all we need was for the electricity to go and 30 seconds later, hey presto, a power cut! Thankfully our pizzas were still produced which we ate by candlelight looking out at the dramatic lightening, summer rain falling like a heavy shower and loud thunder. And this was only our first day in Albania!