Today started last night – at about 12.30am when we were awaken by very loud “house” music thumping out just below our room. After about 10 minutes I decided to investigate and found, to my astonishment, that the DJ had set up on the hotel balcony, just below our room and was booming sound out to the square.

There were a few people about and I may have suggested in somewhat basic English that booming music was incompatible with the basic terms of a hotel contract and that the music should stop – and stop now! First the response was that they had to do this because “there was a problem with the police” but I stood firm and eventually they turned it off and – as a passing remark – a man said to me that we would not have to pay for the hotel room!

I returned to report some success and eventually got to sleep. In the morning the receptionist was clearly highly embarrassed by this incident and started offering us 10% off the room. She explained that we had stumbled into the “reload festival” and that there were thousands of young people in the town but the police had closed down the venue and they were afraid there would be trouble if the party did not happen! Hence the balcony of the hotel was used to keep the party going.

We said we were sorry but no one explained to us that the town was due to become an all night party venue! We explained that we had been offered more than just 10% and expected to negotiate but she called her manager who called his manager … and it turned out he was the person who offered the waiver, and so that is what we got. We then, to our embarrassment, had a lovely breakfast which we also got for nothing as they refused payment for this too. 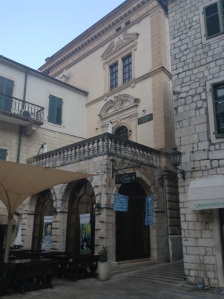 So we left this strange place, slightly later then usual amidst huge numbers of young people who were milling around having partied all night. We hoped none fingered us as the reason the music from the hotel balcony had stopped!

There was a climb out of the town and then a 1.5km tunnel – lights on and push through as quickly as possible – and hope not too many massive trucks backing up behind us. It was OK but these tunnels are a challenge!

On the other side we did 30km of Montenegro’s “Benidorm coast” – a concrete jungle by the sea in what appeared to be totally unplanned development. But it was busy and the only highlight was finding a bike shop in a place called “Bar” (with no lack of bars of course) where a man had the right tool to fix my brake. 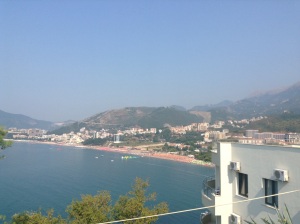 Then we left the main road and climbed a really tough 200m climb to cut off a large section of loop on the main road.

At the top we stopped for lunch and met 3 men from Germany who were native Kosovans. They had lived in Germany since birth or 1972 but still regarded Kosovo has home. One spoke English and described being a “guest worker” in Germany in pretty good terms, but plainly his heart was still in Kosovo. They gave us “Kosovo grapes” which were – in his view – far better than any other grapes in the universe. They were small and very tasty but I am not enough of a grape connoisseur to be sure.

Next was a glorious 20km – with the wind and a gradual descent at 2% or so the whole way. Life is so easy when it is all downhill! We reached the Montenegro/Albanian border which was sensibly a single unit. There was the usual line of cars that we waltzed past to the front – cheeky as ever – and then held everyone up as the machines failed to read my passport properly – probably because it went through the wash a few years ago. But eventually it was OK.

A single border post meant we passed our passports to the Montenegrin official who scanned them in to check us out of the country, handed them to the Albanian guy in the next office and he scanned them in to welcome us to Albania! How brilliantly sensible – but given that Croatia and Montenegro were at war just a generation ago it might be some time before that border develops such a level of co-operation. 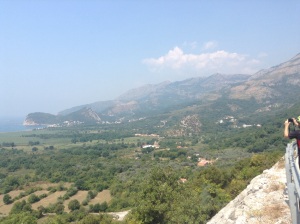 And into Albania – which is poorer, the road surfaces were instantly worse and the people were instantly friendlier. Waves all around as we negotiated the pot holes. After 15km we reached Shkoder which is a bustling modern city and found a lovely hostel where we booked the sole single room. There must be some compromises for being over 50! I found a man who mended the strap of my sandal with an ancient sewing machine and Bernie cooked a delicious egg curry dinner. We really felt we had arrived in somewhere that was distinctly outside Western Europe now – with all the challenges that this will present.

The hostel was full of international visitors and we spent a long time talking in a mixture of English and French to some families from Nantes who were touring Albania for a holiday and clearly having a great time. But we had done 112km today – the most ever on this trip and bed beckoned before too long.

In January 2022 we start a new adventure, cycling from Florida across the Southern United States along the “Southern Tier Route”. There are numerous fascinating places on the way and we are looking forward to having the wind in our faces and the sun on our backs.