There had to be at least one dud day and this was it. David woke in the night with a stomach upset and emptied all contents repeatedly. We both slept little thereafter but David was very tired and weak in the morning. We were in a motel in nowhere in particular and so were keen to get to Thessaloniki.

David managed to pack up and get on the bike but was pedalling slower than I had ever known him on the flat. After 6km we passed the Pela archeological site but decided to give them a miss this time and keep plodding towards Thessaloniki. I couldn’t think of anything else to do but keep pedalling and know that David’s automatic pilot would keep him pedalling too, although he was clearly struggling.  At least it was reasonably flat,
As we got closer to Thessaloniki the roads got bigger and busier. A stretch of dual carriageway was hideous with traffic zooming by and seemed never ending. The worst of the traffic left onto the outer motorways ringing the city but there was still a long run into the centre. After all Thessaloniki is Greece’s second largest city so like cycling into Birmingham on the Aston expressway.

At last we reached the centre and I coaxed David the last km as we found our hotel by which time he was pretty out of it. It was still only 11am. The receptionist said our room would be ready in half an hour (which was good as check in was not formally until 2 ) but when I said David was not well she found a room for him to lie down in while we waited. He then caused confusion by collapsing in the wrong room!
David spent most of the day in the hotel room. Luckily the mechanics of the stomach upset had settled (details not required) but he was very washed out and slept a lot. I went out and successfully got some maps for the next sections of our trip. Our hotel was on the main street running through the city, The Via Ignata, which we had met back in Albania – the roman road from the adriatic to Istanbul – so we were still on target! The street was crazily busy so it was a delightful surprise to turn down towards the sea front on a main pedestrianised area lined with elegant colonnades. David managed a small stroll round in the afternoon before collapsing back to bed. 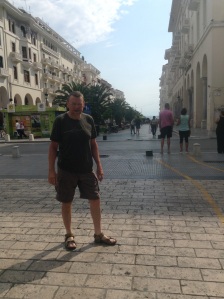 Later I went for another explore. Just one road back from the main road on the north side this time was also another world. Shady tree lined streets that reminded me of Barcelona. The partially excavated Roman Forum could be viewed but honestly did not take long. Agios Demetrios is the de facto cathedral – the largest basilica in Greece. I didn;t find it as awe inspiring as the guide book write up but then we have seen some pretty fantastic churches and cathedrals this trip. It was interesting though to see an orthodox cathedral with its icons and candles. The cathedral had been largely renovated after a massive fire in 1917 that had destroyed much of the city but there were a few lovely old mosaics that had been preserved.
So not sure now of plans for the next few days. David had eaten some supper without ill effect but we will have to see what the morning brings and whether further recuperation is required.

On the plus side, today we completed 4000km from home – but there is still a long way to go.