This is written by Bernie: Today was a sort of non eventful day but also a mega day. We completed 85miles – the longest I think I’ve cycled, certainly fully loaded. 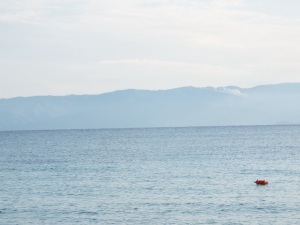 The day started with a lovely run along the coast. Getting up early always seems an effort but is always worth it. The first cycling in the morning is always lovely and was particularly so this morning with the sun sparkling on the water. The scenery was not as dramatic or beautiful as croatia but pleasant – and also did not involve 1000ft climbs!

A motorway has carved its way from Thessalonika to the Turkish border so we were on the old main road – wide, a good surface and hardly any traffic, particularly at 7.30 on a Sunday morning. We were actually able to cycle side by side until traffic built up towards Kavala.

Kavala is the second city of Macedonia. Mostly modern with sparkling white buildings on the hillsides. We trundled into the centre where a small castle sits on a mound above the port with the remaining parts of the old town below it but most dramatically an enormous aquaduct spans the main road. Modelled on roman aqueducts it was ‘only’ built in about 1530. It was still bringing water to the city until the early 20th century. Pretty restaurants lined the harbour area and we were empty and looking forward to lunch – unfortunately we had made good time and it was only 11.30 and none of the restaurants were open! So we snacked on fruit and crisps and stopped 10 miles later at Neo Kavala, a sleepy little village with a shady restaurant by the sea shore, and ate kebabs and Greek salad (of course). 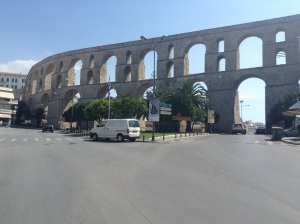 Fortified by food we then had to loop 30km inland where there is the only bridge across the Nestor river, the rest of the Nestor delta being a nature reserve. Having crossed the bridge we turned back south again, directly into a headwind. We had done 60 miles by then but had our sites on a campsite back at the coast. At least we were going across a flat plain. We stopped for an icecream to build ourselves up for the last section. The road turned due east so away from the headwind and dead straight for about 15km. We were cycling in the yellow glow of the early evening sun in lovely temperatures and finally turned down to the coast for the last 3km to the campsite. Exactly 85 miles as we rolled into the lovely campsite. A flat day, although we had climbed 500m over the day of gentle ups and downs and we were pretty exhausted but not quite at the incoherent stage.

We had not camped since Croatia and it felt good to put up the tent again and get a brew going. We had camped much less than we thought, mainly because while in Croatia, where there were many more campsites, it was just too hot so we opted more often for air conditioned accommodation out of the sun. In Montenegro and Albania we did not see a campsite. What we like about camping apart from the freedom is that it is much easier to meet people, especially when you turn up on a bike. We had just settled in when our camping neighbours came over with some nectarines for us. After a swim, shower and delicious supper cooked by David (OK, everything tastes delicious after a long days cycling but this one was particularly delicious) we joined our neighbours to chat. They were from Plovdiv in Bulgaria and holidaying with their daughter who is learning English and Korean and just about to start university. They plied us with tots of strong liquer (which I tried to sip politely but very slowly!). They were kayakers and enjoy the outdoors in summer.

Now plotting our route for tomorrow – we won’t aim to go quite so far! I think we will both sleep well tonight.