Day 4: Eskisehir to a camping spot by a lake near Kirka: 72km and 650m of climbing
Today started slowly – on purpose. We were in too nice a place and too comfortable a hotel to get off quickly. So we ambled around, had a leisurely breakfast and then went back to see the mosque in the morning light. It was stunning as before but also seemed to have different textures to the stone than the night before.

We wandered around the old quarter, got lost and then found our way back to the hotel.

We packed and got on the road by 11, which is seriously late to start the day (but then we only planned a shortish day). The sky was overcast and the road from the city climbed for the first 15km from 800m to about 1050m. It was high altitude plain but was intensively cultivated. Can you imagine cultivated fields at 3000 feet plus in England. A market garden on top of Hellvellyn for example. But we are a long way south, I suppose.

After 40km we dropped into the plain town of Seyitgazi – a town on the plain and a plain town. But the tea was excellent and 2 glasses each came to a total of 2TL – about 50p. Nearly had a total disaster when I knocked over Bernie’s bike by accident and she had left her bar bag open (by accident), and he mobile phone slipped out and down a drain. Luckily it was retrievable and caused much amusement for the locals as they worked out who had the longest, thinnest arm to get hold of it. Our welcoming hero – who spoke a little English (along with our little Turkish) was the hero of the hour. 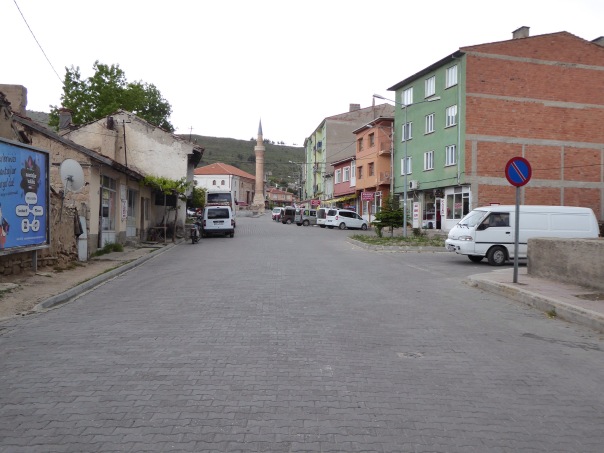 There was a spectacular mosque on a cliff, way above the town but the effort of getting there and its total absence from any guidebook persuaded us to give it a miss. We are, however, getting quite boorish on mosque architecture (just in case this is useful for pub quizzes in the future). Mosques and pubs in the same sentence is probably not wise – now I think about it.

As we left the plain town, spots of rain started – the first of this trip. Jackets, over trousers and overshoes all came out and were needed. The temperature plummeted as the thunder and lightening seemed a tad too close. Cycling on steel bikes we felt like mobile lightning conductors and so ducked into a bus shelter for cover. It was also occupied by 2 smoking motorcyclists – and their motorbikes – so was a bit of a squash. We got bored, wet and even colder as the storm raged. It is times like this when we doubt our sanity (appreciating that family and friends have reached an unfavourable but clear verdict on that long ago). Anyway the bikers finally left and so did we, tempted by better light in the direction we were headed. Eventually the rain eased, the sun tried in a pathetic way to come out and we carried on up the valley. It topped out at 1113m – our high point of the trip so far.

More rain was threatening so we pressed on down the hill towards another nondescript town, and then on a side road to a lake where we set up camp. The sky cleared, the sun came out and the spot was made for camping. I am writing this sitting in our (new) tent (where the poles have not snapped) after a lovely meal (could have eaten a horse between 2 bread vans of course) but feeling content.

Tomorrow promises Phrygian ruins and more – but that can wait to tomorrow.