(David) Not that we knew it at the time, but today we reached 7000km from when we started in Bewdley (our own “Le Petit Depart”) in July 2014. It seems a very long time ago and a long way to have travelled. However we have a great deal more to go if we are ever to reach Australia, let alone do it in a decade.
﻿
We got up early and met Madam’s son (we assume) who also left early for work. She slept on a couch in the sitting room, and was asleep when we breakfasted. However she got up to see us off – perhaps to statisfy herself that we really were as mad as we appeared to be. Even without a common language, it was clear that travelling by bike across her country was way out of her range of acceptable things to do. Lots of mystified shaking of heads but smiles as well as we departed.

The early morning air was cool and dry, and traffic was light. We sped along knowing we had a long day and that it would heat up. We had a few climbs but nothing of note but observed the Georgian countryside as we passed. There are lots of large houses here – vastly larger than in Turkey. There must have been a time when rural Georgia was thriving and everyone was building their own homestead, with large rooms and gardens. But the buildings were somewhere between unoccupied, derelict and ramshackle. There were abandoned factories and it was clear that the good times were long gone. I suspect, finished long before the collapse of the Soviet Union in 1989 but were a symptom of the decay which led to the collapse of communism rather than its cause.

Decaying wrought ironwork was everywhere and paint was not renewed. But there are also signs of thriving economic activity. Lots of cars were not Ladas but old (and sometimes new) Mercedes and BMWs. For some the new economy is delivering the goods

The average Georgian male appears overweight, bald and wears a black Tshirt with sunglasses. They look like archetypal gangsters but, of course, this is not true. There have been serious problems with organised crime in the past but whilst the image may not have changed, the reality has (so we are told). But whenever we have asked anyone looking like a gangster for directions or advice, they are friendly, helpful and want to welcome us to their country. So we need to put aside our prejudices and treat people as they are, not as we perceive them to be.

There are contradictions everywhere because this is not a country where feminism is overt, but it has had a series of high profile female politicians and had the highest proportion of women in parliament anywhere before 1989. Yet women appear to do most of the drudgery work, with chubby men sitting around smoking and talking on their mobiles.

There are few really obese people but the “average” person has a distinctly rotund appearance, tending towards the heavier end of the scales. In many societies, extra weight symbolised success in life and that culture appears to be heavily represented in Georgia. The only slim women I have seen are young women in the cities, who are clearly following lifestyle trends from Western Europe.

People are really kind here, and welcoming without the reserve we saw in Turkey. We have had lots of genuinely friendly waves from cars, horn toots and encouragement as we struggle up hills. The Georgians appreciate “sportive” greatly, even if it is from the perspective of a car seat at the moment.

All these thoughts occurred to us (well me at least) as the morning heated up. As the heat and humidity rose, so a headwind got up and it was more difficult to make progress. After 70km we made it to Vani for lunch. There are Roman ruins here that get a write up in the guidebook, but honestly we were too knackered by the humidity and the wind to make the 5km trip out of town to see them. We recovered in a cafe, drank copious quantities of water and braced ourselves for battling the wind again

The next 20km were pretty rough – slightly uphill and into a strong headwind. We made progress in an easterly direction at about 14kmph at best, and, in the heat of the day (around 40 degrees C) , resented every centimetre. But all bad things come to an end and we then followed the road north towards Kutairi. Out of the wind, with the afternoon clouding up and temperature falling and after drinking several litres of Fanta, life seemed a whole lot better. Fizzing and farting, I made my way towards to 100km mark for the day (Bernie – thank goodness I was leading at this stage and not behind!)

The clouds burst about 10km outside the city. We happened to pass an empty car wash and so dived into the covered area as the heavens opened. 10 minutes later the cloudburst seemed to have passed but the rain was merely steady. We followed the road through a wonderful old forest that goes right up to the edge of the city.

Then we got hopelessly lost in the rain soaked city streets, but eventually found the centre where – to our astonishment – posters boldly told us that Jose Careras was due to perform at the opera house this Saturday. We shall be long gone by then but the central square had a lovely fountain with wide open streets. This is a country of endless contradictions. 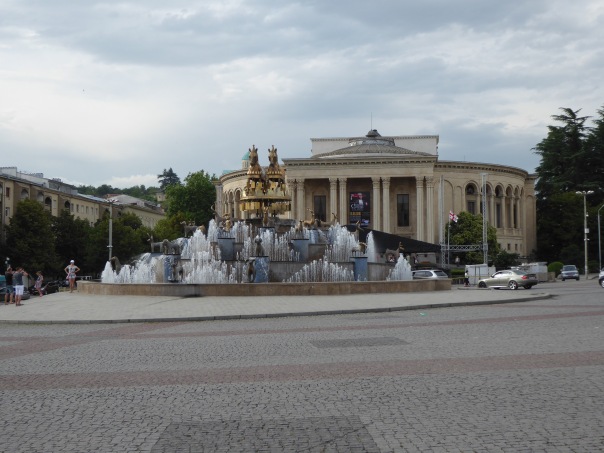 We planned to stay 2 nights so booked ourselves into a decent hotel but, once we found it after winding up the cobbled backstreets, there was no one at home. Had we booked into the Marie Celeste of the hotel world? Eventually we raised an overweight middle aged male (with cigarette) who summoned women to see to our our needs (a pattern we had observed before).

We were the only guests at that point but several tour groups turned up later and so we are not alone. A lovely meal in the centre (which cost next to nothing) and bed after 114km was all we could manage. But after a beer the tough part of the day faded from memory, the aches and pains in our legs receded and this did not seem such a stupid way to spend time after all.