(Bernie) Today was a rest day and an opportunity to see the sights of Kutaisi, Georgia’s second city, and it’s surrounding area. After a lazy start our first port of call was Bagrat cathedral. This 10th century cathedral was sacked several times over the centuries and was left a a ruin overlooking the city until recent years when it has been restored to its original architecture, as far as can be established. Using some reclaimed old materials and largely re-put together with new materials it also added clear modern aspects to the building so as not to pretend to be something it wasn’t. Maybe not to everyone’s taste (the guide book slates the new green roof – but it is based on the original colour from fragments found), I thought it was quite well done and it has an impressive position overlooking the city below.

We then decided to cycle out to Gelati Monastery (nothing to do with Italian ice cream). Described as being in the hills behind the city it did not quite describe how steep those hills were! In the 22km there and back we climbed 650m! However it is much much easier without any luggage and we cruised up the last very steep 2km as minibuses passed us and stared. The monastery has a central church with fantastic frescos dating from 10th-16th century. It is said to stand in one of the most beautiful spots in Georgia and on a clear day you can see the Black Sea Unfortunately it was cloudy and drizzly rain while we were there so I would not rate it quite so highly. We mingled with several school groups but at moments when they had left, the church was quite serene. 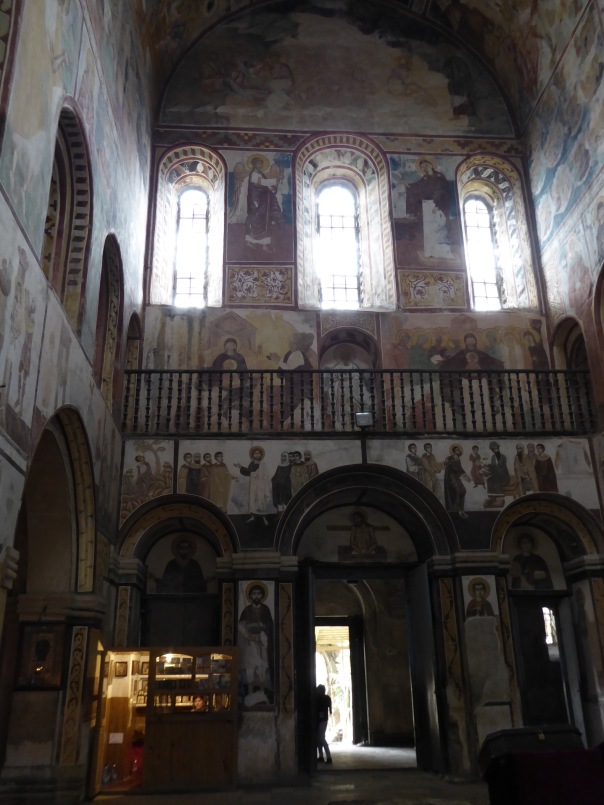 We pedalled back to base at the hotel to put our feet up and wait for a call from Pippa about her exam results. We felt quite tense as we tried to relax but the call came through and she had passed! We were really delighted for her and relieved. It was great news and means she can leave for her volunteers trip to South Africa on Saturday.   Next up England were playing Wales in the European cup. We had misread the times and missed the first half but watched the second half at the hotel and were pleased that England won (2:1). 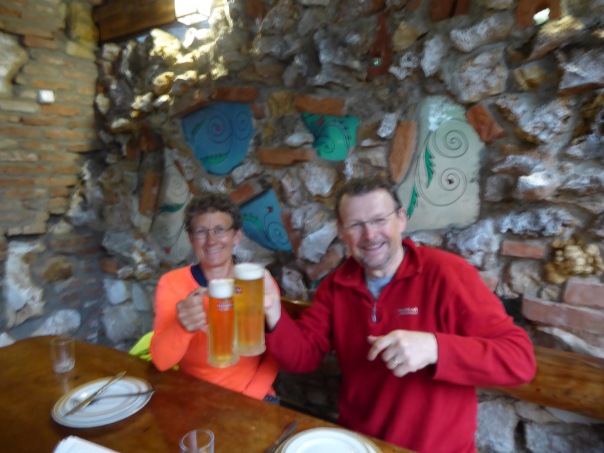 Time to stroll out for supper. The hotel was near a park that had a recommended restaurant. It was still raining so thought we would try it as it was near by. The top of the park was a little fun fair with Ferris wheel, roundabouts and dodgems. The restaurant was right by the dodgems and our meal was serenaded by the laughing and squeals of children as they bashed into each other!. Next to us was a group of men out for an evening and dishes and dishes and drinks and drinks were brought out to them. I think the waiter thought we were rather puny only ordering 2 main dishes and 2 salads but we had discovered that portions are very generous and the salads were enormous. I had ordered mushrooms with cheese , that came along and were delicious. David had ordered Garlic Chicken – eventually a huge dish arrived with all the bits of a chicken apart from the meaty chicken breasts smothered in a field of garlic. Unfortunately we did not find this so delicious and we tried to make it look as if we had made a good stab at eating it but the waiter again was rather mystified at out inability to eat properly or even accept taking the left overs in a doggy bag!
Meanwhile the table of men next to us had ordered us 2 glasses of wine that the waiter brought over as a ‘gift’. They were of course enormous glasses and perhaps not of the finest vintage as we toasted and thanked our neighbours. I managed to surreptitiously pour some into my beer glass so as to appear to have made a good stab at drinking it, otherwise I fear I may not have been able to stagger home. All in all it was one of out more unusual meals!
Back at the hotel we saw that Jo Cox MP had been shot and killed which ended a day that had been a day of good news with rather a pall. A terrible tragedy.