(Bernie) I began to think the Georgia leg of our trip was jinxed. Accident at the border, hot and humid the next day, ferocious headwind the next, raining on our day off and then total road wipe out yesterday. But today everything got back in to order and we got back on schedule.
We set the alarm early to try and beat traffic for at least a few hours on the main road that we now had to follow. Backtracking the 10km to the main road first thing was a bit dismal as we followed the road up and down – at least it was more down than up this time. So at 7am we were back at the place we had left at lunchtime the previous day.

The early start was worth it as the traffic was light (it was also Saturday) and we saw the early morning mist on the green hillsides. Riding on the excellent road surface was a treat and the river valley we followed up was beautiful. The first section was very gentle climbing so all in all it did not feel too bad that we had to change plan. 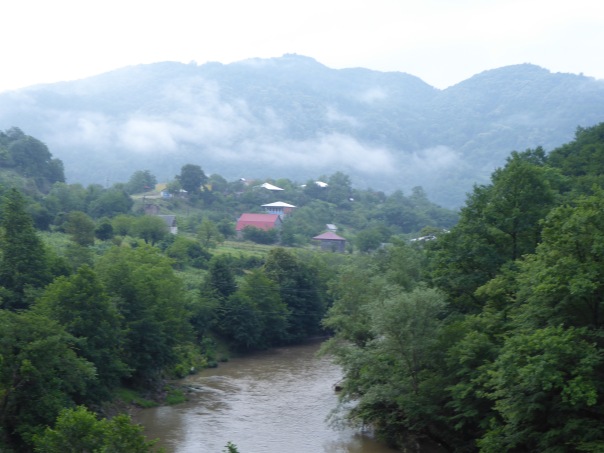 We had only managed to breakfast on jam tarts, cherries and coffee (all that Kharagouli shops could offer) so after a while we found the first restaurant that was open and stopped for coffee. We thought we had ordered some food but when nothing seemed to arrive it appeared that we had somehow misinterpreted the signs and only had coffee, so off we set again and continued the climb on sugar laden snacks instead.

Traffic built up but was not dreadful. Sometimes lorries passed a bit too close for comfort but more alarming was overtaking traffic the other way, coming directly towards us at speed! The gentle climb turned steeper and at that point the road widened to 2 lanes so traffic was able to give us a wider birth as we plodded on up. At 850m (we started at 200m) we reached the Rikoti tunnel that cut about 150m off the pass and had been described as ‘horrible’ on cycling blogs.

We paused just before the entrance to debate what to do – there was a steep bypass road or we could just belt through as fast as possible with all our lights on. As we were standing there a man with a pick up truck pulled up. He declared the the tunnel was far too dangerous for bicycles and he would take us through with his truck. Fantastic! We quickly loaded up and were soon through the 1.7km tunnel. As soon as we entered it I was so glad I wasn’t cycling as the lanes were narrow and it would have been terrifying. The driver tried to persuade us to let him take us on to the next town. It is difficult to explain to non-cyclists that we wouldn’t want to be cheated of the downhill bit after we had slogged up the difficult bit but he politely set us down. Such a typical example of Georgian wanting to offer help. 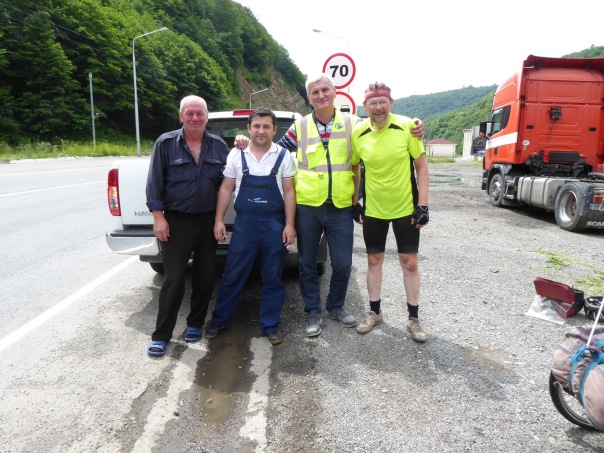 We duly freewheeled our way down hill and soon reached a nice looking cafe where this time we got decent coffee and yummy pizzas Not Georgian traditional food but just what we needed. They were wonderful. We gently continued to descend to the Mtkavari river, still at 700m. We would follow the river all the way to Tblisi and we’re delighted that we would be going downstream and not upstream!

We at last were able to turn off the main road and on to more minor roads that ran south of the river. The road gently undulated along the foothills. This was cherry picking season and there were hundreds of farmers by the road with buckets of cherries to sell. We also hit the farm rush hour – as all the packers came out of the fields. We ambled at a slowish pace knowing that we still had all afternoon, passing a couple of old churches and a castle. The road turned slightly more into the hills – it was gentle climbing really but our legs were tired but it was worth it as we got good views across the wide valley and hazy views of the snow capped Caucasus Mountains in the distance that creat a huge natural barrier with Russia.     In one village we were accompanied for several Kms by 3 lads on their bikes.

At last the road turned downhill – but with a final steep hill (as there always is) and we reached the industrial town of Gori. Gori’s only claim to fame is that is the birth place of Stalin and even when it became apparent that he was a psychopathic tyrant, the townsfolk were reluctant to let him go as a son of the city – if not a hero then at least a strong man who got things done. It was the last place in the former Soviet empire to still have a statue of Stalin in the main square. The statue was taken down quietly overnight in about 2006 with no further discussion with the people!
We duly cycled up Stalin Avenue and easily found the friendly guest house we had booked in a pretty side street and we could finally collapse. Back on schedule and one more day to Tiblisi.