Every cycling trip has a day which is “the big one”.  This was our big one – 72 miles and 1600m of climbing, topped off by the fiercest head wind I can ever recall cycling against for many years.  But it was also memorable in the best ways and for so many reasons.

We started by being provided with breakfast by Nick and Charlotte who continued to be fantastic hosts.  Charlotte was off to work and Nick was luxuriating in a day without 10 minute appointments to see patients in his role as a GP.  We had scrambled eggs from their own chickens and chatted over tea.  When we could not put it off any longer, we said our goodbyes and left.

The first few miles followed cycle route 7.  Even though the route followed the A9, we never needed to share space with the lorries.  It was a mixture of side-roads and bike-path along the main road, gently undulating.  After about 8 miles we got to the “Slochd summit” at 405m.  Given that we had started at 270m, it was not really fair to call it a summit but it might get prizes for being the most unpronounceable place we have passed so far!

We then descended to Cartbridge.  It did not feel that we had put in sufficient miles to justify a coffee stop so we carried along the valley to Grantown, aided by a strong South-Easterly wind.  We could see the larger hills of the Cairngorms out to the south of us, looming up in the morning light.

We reached Grantown after 23 miles, which is a tidy, chic, Victorian feeling place.  Stone buildings dominate with the slight feel of the type of Scottishness based on country sports for the English elite which was either re-discovered or invented by the Victorians (depending on your views).  But they built fine buildings and developed a sustainable tourist industry for this remote area to supplement crofting, so it was not all bad (even if they invented lots of traditions at the same time).  We stopped at an excellent coffee shop for coffee and cake, and looked at the map for the route ahead.

My route finding skills departed me as, first, we cycling down the main street and failed to spot the Co-Op (so disguised by heritage that we missed it) and then took the wrong road out of town.  So we ended up cycling up and down the same road 4 times, looking like complete idiots.  Eventually we found the right road and dropped down to the river Spey before starting the first major climb of the day, over a 430m pass to Tomintoul.  The landscape was big – grouse moors extending for miles either side – and the odd patch of snow clinging on from the winter.  It was steep but not too bad and we plodded up.  The wind helped at times and hindered at others.  It is hard to speak of the direction of a wind in the mountains because it all depends on the topography.  It whistles around the shapes of the mountains and there are times when one feel’s it should be against us but is in our favour and, regrettable far more common, occasions when it is against us and instinctively we feel it should be a side wind or in our favour.  But it is what it is, and we just had to deal with it. 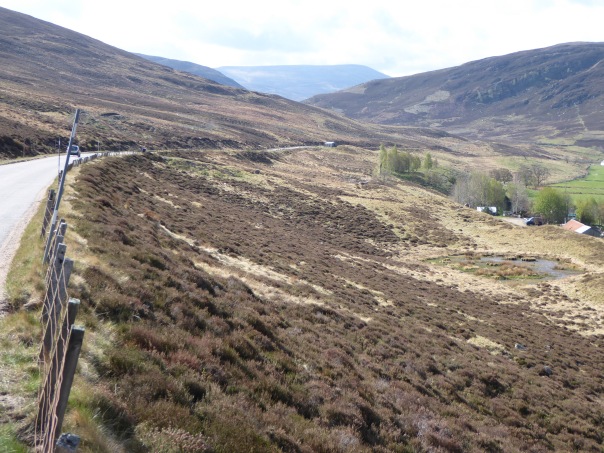 The descent from the pass was as difficult as the climb.  A 20 to 30 mph side wind threw the bikes around if we went too fast, so it was brakes on all the way down.  Then we came to the drop to Bridge of Brown, which warned of a 20% slope.  We managed it and then climbed at nearly the same gradient.  Eventually we reached Tomintoul.  This proclaimed itself to he the highest village in the UK at 345m, and also was influenced by the Sassenach pound, as it had a large hotel and a series of twee stone cottages.  We lunched in the main square and noted the wind seemed to be increasing in strength – if that was possible.  Then we re-joined the A939 to inch our way up the valley to make the climb to the Lecht ski resort.  The brown heather moorland stretched out on either side, the traffic was quiet and, although it was overcast, the rain stayed off.  The combination of the slope and the wind made it slow progress but eventually we turned a corner and saw the buildings of the ski-resort high above us.  There were a series of “arrows” on our map which indicated a steep slope.  As a rule of thumb we can manage a single arrow but have to admit defeat with a double arrow.  We had to stop and push at one point where the combination of a strong wind against us and the road, which felt nearly vertical (probably only 20%), defeated us.  But the top got nearer and nearer and eventually we made it.

There is something depressing about all ski resorts without snow.  The snow covers the ground and makes ugly buildings look less ugly, and the sight of happy skiers justifies the intrusion of large buildings on remote slopes.  But empty ski resorts and stationary ski lifts in the summer are a blot on the mountain landscape in the alps and are, even more so, in Scotland.  It was, of course, closed!  We could not even get a cup of tea to celebrate climbing to 2090ft (that is about 640m)!  Then, a few minutes later, we topped another rise, lost the sight of the resort and the Cairngorms spread themselves out before us looking fantastic.

The descent was hairy – strong side winds made it tricky but we managed it, as well as a steep descent down to the interestingly named, Cock Bridge.  The, joy or joys, we had the wind in our favour as we sped down a gentle hill towards Colnabaichin (properly spelt I assure you but equally improperly pronounced).  Before then a tea and cake stop emerged like a mirage.  “Two mugs of tea please” we said.  “You look like you need cake too came the response” from the young chap who in charge of the mirage.

Refreshed we tackled the next climb which was “only” another 150m, but did have an arrow which seemed to extend for a long section.  By now our legs were starting to answer back.  There was a famous Dutch Cyclist whose catch phrase was “shut up legs”, as he answered back as his legs complained. We knew a little of what he felt.  But the scenery was again stunning and we then had a lovely descent towards Ballater.  But the road to our destination, Braemar, turned off before reaching Ballater and so we climbed our final 150m climb of the day.  By this time we were directly into the  wind and it was unrelenting.  Sorry to go on about the blessed wind so much but a 25 mph headwind makes going on the flat feel like going seriously uphill.

Going up a 13% slope with a 25 mph headwind is a young person’s game.  It is not recommended for normally sedentary workers in their 50s and we felt the folly of our choices.  But the hostel was in Braemar and we had to get over the hill to get there.   The compensation was more remote grouse moor, lovely shaped hills and the feeling of remoteness.

The descent took us into trees and so the wind dropped, and it led us to Balmoral Castle.  This was a key part of the Victorian recreation of the myth of a romantic Scotland, and work started on the castle in 1852.  Having not had an invitation to drop in for tea (no doubt it got lost in the post) we did not drop in but turned East to battle up the Dee Valley for the last 9 miles to Braemar.  We made it – not without a few stops and probably did not appreciate the beauties of late afternoon sun in the valley.

We arrived at 6.30pm, having been on the bikes since 8.15am with a series of relatively short stops, having covered 72 miles and climbed 1640m.  We normally think 1000m shows a “big hill” day and aim to limit ourselves to about 60 miles.

It was an astonishing day even if it left us without a great deal of conversation for each other at dinner.  The body is an amazing machine.  We had started the trip out of condition due to injuries but had build up fitness through the previous week.  The only question was how we would feel facing another day on the bikes tomorrow!

In January 2022 we start a new adventure, cycling from Florida across the Southern United States along the “Southern Tier Route”. There are numerous fascinating places on the way and we are looking forward to having the wind in our faces and the sun on our backs.