We got an early start with glimmers of sun through the early morning mist. The road started at 1450m and wound through tea plantations, gradually climbing up through the Kannan Devan Hills. David’s Garmin inexplicably stopped working but there was only one road for the day so we needed little navigation. 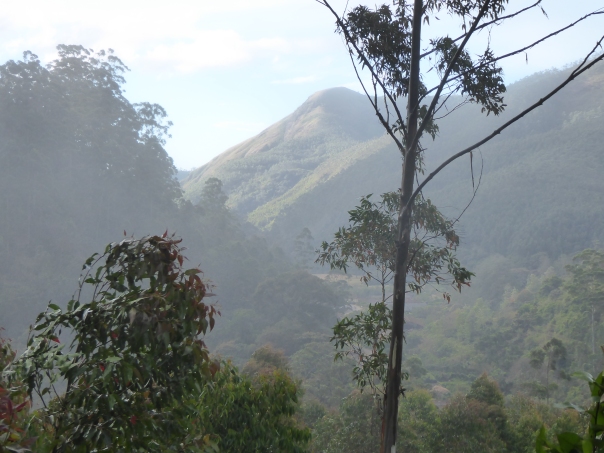 As we climbed the early morning mist thickened into a dense fog and soon we were seeing very little at all. Lights and fluorescent jackets were put on to make us more visible to the passing traffic – which was little. Our climbing legs were going well and the gradient not too steep but no reward of views as we finally peaked at 1850m.

We picked our way down the other side in the gloom. Any hope that crossing the pass would lead to better weather were dashed as the fog got even thicker and the drizzle turned into heavier rain. We were soon kitted out into our full wet weather kit, including over trousers and overshoes. At least we felt it had been worth carrying them!

It would have been a fantastic descent, the gradient not too steep and had a feeling of being surrounded by stupendous views but I could see virtually nothing apart from David’s flickering back light and bright yellow jacket. We paused to chat to a motor cycling group who were doing a trip round South India – the leaders said they had done this route 4 times but never seen weather like this. Hey Ho – sometimes the dice are in your favour and sometimes against. The dice then turned another screw and David hit a pot hole that reared out of the fog hard and got a puncture – the first of the trip. 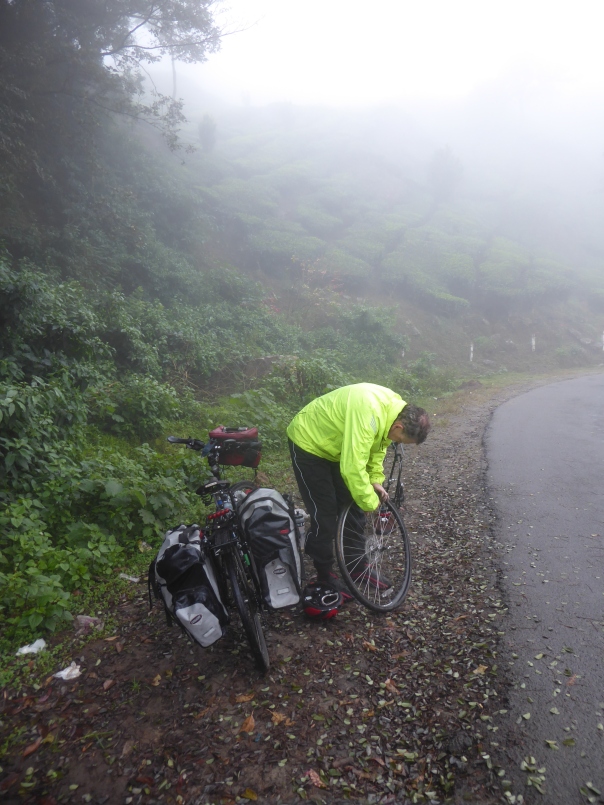 While David was mending the puncture in the drizzle and I was trying to get some feeling back in my hands, we were passed but 2 Dutch touring cyclists who were going up the hill. We chatted and swapped tips on places to stay then on our way in different directions. So, we are not the only ones who are devoid of any judgement! 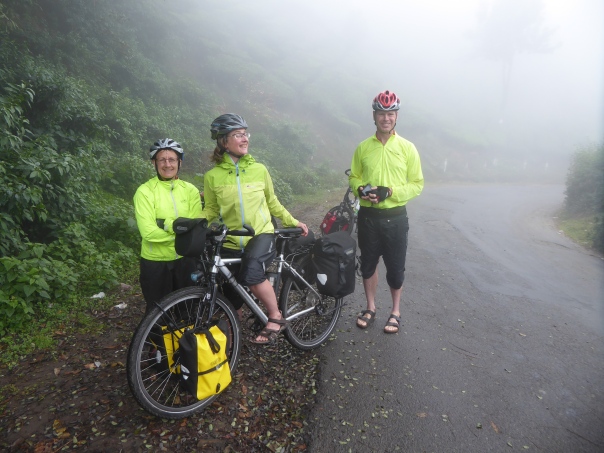 We continued down, down, down, still seeing nothing. Just before the town of Myapoor the fog lifted to a mist and we could see we were going down a beautiful valley and passed through a sandalwood forest. In Myapoor we stopped for a cup of tea. We hadn’t had breakfast and realised we had climbed about 500m and gone 45km on a banana! We tucked into some fresh samosas and black tea to revive ourselves. The town was at the edge of the Chinnar Wildlife Sanctuary.

Our original plan had been to stay there and arrange a trip into the sanctuary but there seemed little point in fog and rain so we decided to press on. The road ran through the sanctuary and at times the mist lifted enough to show fantastic scenery – a river far below and hillsides wreathed in mist. It was very atmospheric.

We spotted some long tailed monkeys on the road but they were gone before we had time to pause. The road still dropping all the way to the sanctuary entry point 16km from the town. We had descended from 1800m to 400m. We did pause to see if there seemed any point in going in to the sanctuary but the next trek did not start for another 2.5 hours and would still have taken place in the mist and drizzle. So we decided to press on; there were plenty of other wild life sanctuaries on our route.

At this point we passed from Kerala into Tamil Nadu and were on a road going through Annamalai Tiger Sanctuary. The terrain felt completely different – we could have been in Africa. Small stumpy trees and bush with lots of birdlife. We saw some elephant dung by the road but no sign of elephants of tigers as we cycled through! The sky was now just overcast with occasional drizzle. I suspect that is what put off the tigers making an appearance.

Once we passed the check point out of Annamalai we were suddenly back into habitation and cultivated land. It felt like flicking a switch and made us realise how the landscape would have been if it had remained untouched .

We finally had 25km of flat road to the town of Udumapetta. A typical busy, bustly town with lots of characters but no particular features of note. It felt like a normal indian town way off the tourist route. The road was dusty but considerable investment was going into the shops. There were mobile phone shops that would not have looked out of place on a UK High Street, clothes shops and jewellers. India is being transformed – and this place showed how a fusion of the old and the new was happening before our eyes.

We found a decent hotel – choosing the deluxe room with hot water! Later we strolled out and realised we were ravenous. We saw pizza advertised in a bakery and that seemed just the job. We had delicious pizzas and brought some donuts as a treat to have later in the room- with some in reserve for breakfast too!