Today was a flat amble across the plain which is north of Udumapetta towards the city of Mettupalayam. The main purpose of today was (a) to get 100km further north and (b) to get to a place where we could take a steam train up to Ooty. Not all of you will know our dear friend Malcolm Garner, but, for those who do not, he is a “little bit” keen on steam trains, and would not forgive us if we passed by the chance to take one of famous steam trains in the world – from Mettupalayam up to the hill station of Ooty – a climb of about 2,200m. We both share a part of his enthusiasm – even if we are not minded to invest in owning a train. 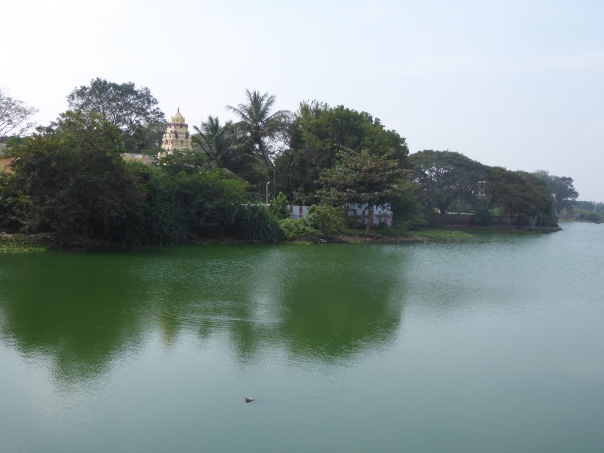 Anyway, back to today. We are getting to bed earlier and earlier and getting up likewise. So today we started at about 7am. It was quiet and misty.   At times it was more than misty and was like cycling through fog. However the fog gradually lifted as the sun rose. 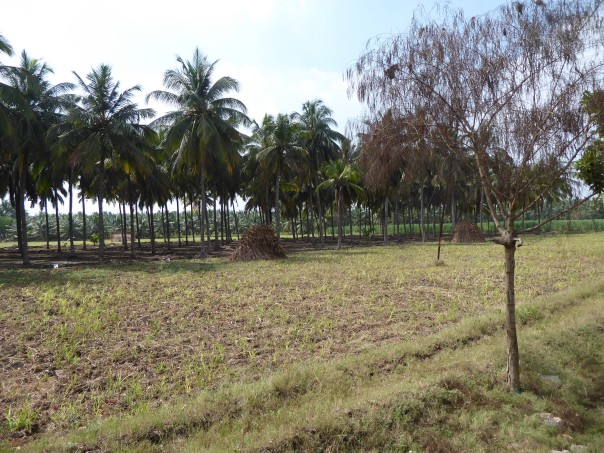 The road was reasonably flat and we made good progress. This is developed agricultural land, but coconuts are an important cash crop, and so we proceeded under the shade of coconut trees. Lots of maize is grown here, with other crops we could not identify. Herds of goats graze on the poorer land and there are, of course, cows at regular intervals (both with and without minders).

At one stage we were passed by a “bucket man” – who got more buckets tied to a moped than I would have thought physically possible. Probably off to market somewhere with all his stock carried on a single motorbike. 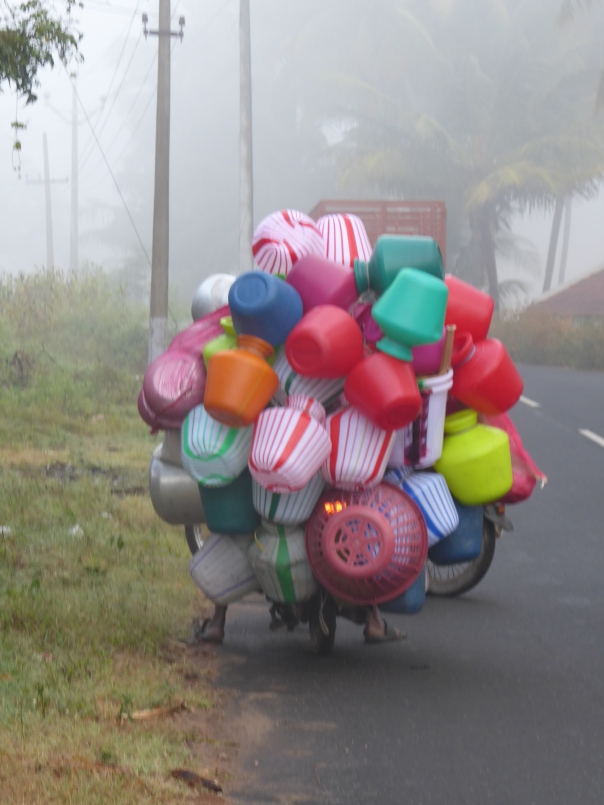 We stayed off the main roads, which had the delight of quiet narrow lanes to cycle down. Traffic was light all day on these roads but it had the disadvantage that some of the roads on googlemaps existed and some did not. If we had been in our first few days we might have got worried by this but we are so relaxed into the trip now that a few km diversion is something we take in our stride. But where the minor roads exist, the surfaces are fine and cycling along them through a string of colourful villages (which are all different) is a total joy. 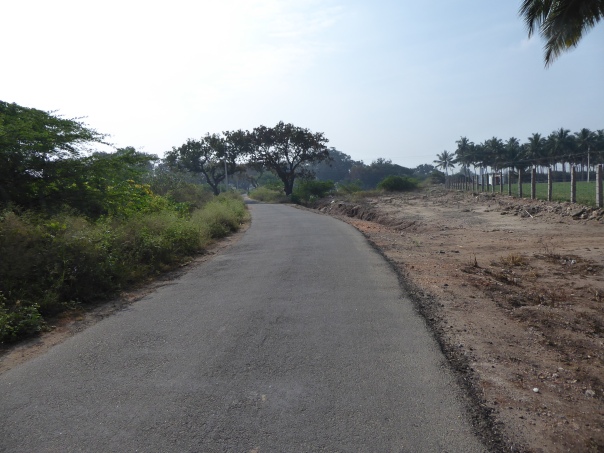 We stopped at lunchtime at a roadside café, and asked for “black tea – NO, please NO, sugar” which translates into black tea with less sugar than they would normally put in it. After all, no one has no sugar at all in their tea – and so we cannot have meant that! But we also had hot fried slivers of banana which were delicious. In general, if we can see food being cooked, we are prepared to eat it. The worry is food that is sitting around, attracting all manner of nasties! So far, our stomachs are putting up with the lack of western fare. 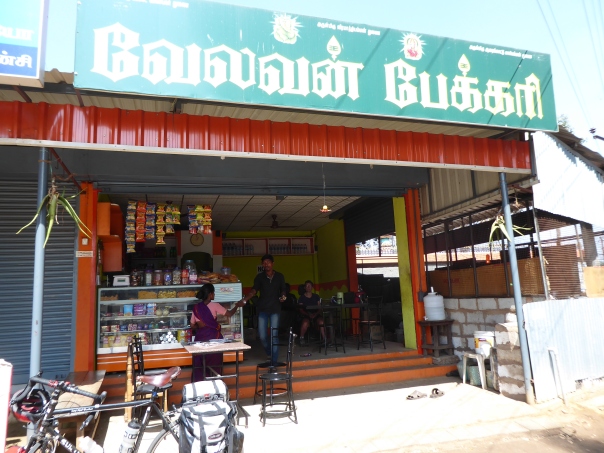 In the afternoon it heated up, but we found something on the road that we could overtake easily – a bullock cart (with bullocks that clearly had their own minds and were trying hard to go on strike against the idea of pulling a cart).

We arrived at Mettupalayam at about 3pm, which felt like a long day. We had broken the 100km mark for the first time – but it was fairly flat. We then sought to negotiate a ticket for tomorrow’s single train – leaving at 7.10am. No open tickets were available but there are about 20 made available by the Station Master at 5.30am, to the first 20 people in the queue. So it’s an early night and the other blogs suggest we will need sharp elbows to hold our place in the queue. Then we have to negotiate to get our bikes taken as luggage, buy food (no food on train and no toilet) – not all to appease Malcolm!

We ambled out amongst the chaos of the traffic for a lovely meal of vegetarian masala dosa and added spicy bits – loads of bottled water and a second course – all for less than £2. This was a family restaurant, and I got asked my opinion on the best Indian Universities for an MBA by the son, and Bernie got asked about the father’s blood pressure. Her answer was far more informed than mine!